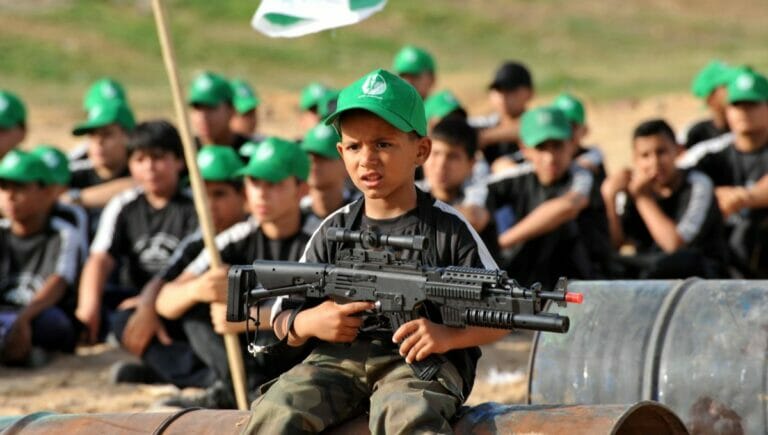 Mena-Watch spoke to David Bedein about the German and European unwillingness to engage with military training in UNRWA schools.

David Bedein is the founder and director of the Bedein Center for Middle East Policy Research in Jerusalem, which has been researching UNRWA since 1987 to educate the public about how its funds, schools and structures are being misused by Palestinian terrorist organizations for their own purposes.

On March 14, 2022, he sent an email to Oliver Owcza, the head of Germany’s representation in the Palestinian Territories. In it he wrote:

“Your Excellency, the Bedein Center for Near East Policy Research has identified the presence of massive weapons at UNRWA facilities. This is shown by several documentaries produced by the Bedein Center in the last year alone. [Links to websites were included; Note Mena-Watch.]

The Bedein Center has a question for you, the diplomat of a UNRWA donor nation. As a UNRWA donor, will you ask UNRWA to conduct an inspection of all facilities to remove deadly weapons?”

David Bedein received no reply. I then asked the same question to the Press Office of the Federal Foreign Office. The Foreign Office says:

“The Foreign Office is not aware of the incident you mentioned, which you attribute to a UNRWA facility. Germany is in permanent contact with UNRWA.«

A non-response typical of the Foreign Office whenever Palestinian terrorism is at stake (see also here and here ). I talked about this over Zoom with David Bedein.

Stefan Frank (SF): Mr. Bedein, you sent video recordings to both the German representative in Ramallah and the Federal Foreign Office showing how weapons of war are presented and even fired in UNRWA facilities. Is that correct?

David Bedein (DB): That is correct. Yesterday we were informed that in exactly four weeks a new summer training program for children from UNRWA schools will start with weapons training.

SF: In which facilities does it take place?

DB: These exercises are conducted in open spaces not far from the UNRWA schools. The people running the program are teachers and students from UNRWA schools.

SF: Is the area where the military training takes place legally under the control of UNRWA?

DB: Difficult to say. In previous films that you know, from 2017 and 2018, it actually took place against the backdrop of images and insignia of UNRWA. When we were filming last summer, we didn’t see the UNRWA emblem or the United Nations flags. But in January we filmed UNRWA children with guns in a UNRWA refugee camp near Bethlehem.

SF: The area for the military exercises is adjacent to the UNRWA schools?

DB: It’s right next to it. The drill does not take place in the schools themselves, because after we showed these films with footage from 2017 and 2018 in the German Bundestag and at the United Nations, there was a lot of feedback that something like this should not happen.

I predict that July’s military drills will likely not be held in front of UNRWA emblems; but when we then interview the students and ask them where they are from, they will say – like every summer – that they are from UNRWA schools. They will also tell us what they learn in UNRWA schools: what they call the “Right of Return at Arms”.

SF: What can be seen in the videos that you submitted to the German representation in Ramallah and the Federal Foreign Office?

DB: We submitted three videos: One from 2018 in which the children are marching with guns. One sees UNRWA instructors teaching them the idea of ​​the “right of return” at gunpoint. Then there are the summer 2021 footage of thousands of children from UNRWA camps recruited into UNRWA schools being taught how to use automatic weapons. They give automatic guns to children – the youngest being nine years old – knowing they will use them. The third footage we have made available is from January this year, Fatah Day, at UNRWA’s Deheishe refugee camp. You see children with guns again.

SF: What do you say to the German government?

DB: We asked the federal government and other donor countries a very simple question: As a UNRWA donor nation, will you ask UNRWA to conduct an inspection of all facilities to remove deadly weapons?

Yesterday – this is coincidental – I received a press release from UNRWA’s spokeswoman saying that she needs more money for UNRWA’s Jenin camp, which of course has been a hotbed of terrorist activity lately. The message did not mention any regulation of the funds: it may come in cash and the purpose is questionable. So my message to the German electorate is: Look what happens to UNRWA funds, see if they are used for military purposes.

SF: The Foreign Office states that they are in contact with UNRWA and have no knowledge of weapons in UNRWA facilities.

SF: Have you contacted the foundations mentioned?

DB: Yes. I asked if they checked if the money they sent was used for weapons, for terrorist purposes – no answer.

SF: You have made similar requests in other European countries and in North America. Was that more successful?

DB: I’ve had success with the US government: the US government will not release the money for education until they have assurances that education will be monitored and revised. That is, the US government has allocated the money, but it will not release it because the US Congress is demanding accountability for what happens to the money. So the United States gave the money, but also made a condition: that UNRWA not be allowed to use it until it fulfilled the treaty. The United States and UNRWA agreed in the summer of 2021 that they would not allow the facilities to be used for terrorist purposes.

It is very important to monitor both incoming humanitarian funds and incoming educational funds. 58 percent of the UNRWA budget goes to education. If you see the children in military training now, that’s part of the education system.

SF: Have you had any success in Europe in your efforts to control funds for UNRWA ?

DB: Not at all. The EU Parliament has made certain recommendations for revising textbooks. However, the European Commission, which represents the EU, has not addressed any queries to UNRWA. So while the European Parliament is very sensitive to our questions, the EU decision-makers are not allowing anything to change.

SF: What do you think is the main reason why the EU and the German government are reluctant to stop the use of European taxpayer money to fund Palestinian terrorism and the murder of Jews? Is it laziness or a desire to sweep these things under the rug?

DB: It’s more serious. The Federal Foreign Office is striving for economic relations with the Palestinian Authority (PA), the PFLP and Hamas. It’s all a matter of economics and they don’t want anything to interfere with their deal with the PA. Their policy is: as long as the money flows, there will be peace. There is of course no basis in reality for this assumption.

SF: Do you see any connection to how European governments paid for Palestinian terrorist organizations in the 1970s? At that time, countries like Germany and Switzerland paid many millions of Deutschmarks and Swiss francs in ransom and protection money to the PFLP and other terrorist organizations so as not to be targeted by the terrorists themselves.

DB: There are very big similarities. As a former American, I know this concept as “paying tribute to terrorists.” And that’s what we’re talking about. Pay tribute and look the other way when they do something wrong. It would be easiest for the German government, which has an office in Ramallah, to look at all the refugee camps in Judea/Samaria, Gaza, Jerusalem and see what’s going on there. And with the amount of guns — we’re talking guns for 30,000 children — it’s not difficult to figure out where those guns are kept.

SF: Shouldn’t this also be an important human rights concern of the federal government?

DB: Of course. It is a violation of children’s rights, which are protected by the UN. There are very strict UN laws against arming children under the age of fifteen. And if you look at the films, there are children who are certainly under the age of fifteen and are receiving military training in weapons. We accuse the German government of fomenting a violent uprising. She can’t say she doesn’t know what’s going on. This happens in public. Is the German government at least looking at what is happening in Jenin?

SF: What can German citizens do who do not want their tax money to be used for child arming and terrorism?

DB: I recommend that you raise the issue of guns, incitement and indoctrination in UNRWA schools and UNRWA refugee camps with the Foreign Office, with the Chancellor, with all parties in the Bundestag and ask for a full assessment. Nothing easier than asking this question.

And most importantly, as the largest donor to UNRWA, Germany can support the rehabilitation and resettlement of these people who have been living in refugee camps since 1949.

SF: Where can I find out more about this topic?

DB: We have a German language website where you can find more information about UNRWA. I emphasize that we are privately funded. We don’t get a penny from any government. If you want to donate, please do so, on the website you can find out how to do it the easiest way.