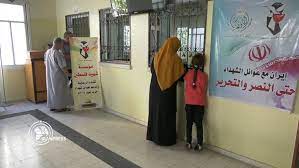 AhlulBayt News Agency (ABNA): In cooperation with the Palestinian Martyrs’ Institute in Gaza, the Islamic Republic of Iran’s aid was distributed among the families of the martyrs and the wounded Palestinians in the Gaza Strip.

With the victory of the Islamic Revolution, the Islamic Republic of Iran declared the support of Palestine and Quds as the central issue of the Islamic world and has always supported the Palestinian people and resistance in various ways for the past four decades

Nasser al-Sheikh Ali, Head of the Palestinian Martyrs’ Institute in Gaza, told Iran Press on Monday that Iran had supported the families of Palestinian martyrs and wounded in Gaza for years.

He said about 7,000 families of Palestinian martyrs in the Gaza Strip were receiving humanitarian aid from the Islamic Republic of Iran.

Nasser al-Sheikh Ali noted that the Palestinian people live in absolute poverty and stand firm in defending the Palestinian land to have a dignified life under the siege of the Zionist regime.

He also called on the world to support the Palestinians in their homeland.

In an interview with Iran Press in Gaza, some families of Palestinian martyrs praised the support of the Islamic Republic of Iran for the people and the Palestinian resistance in defending their homeland.