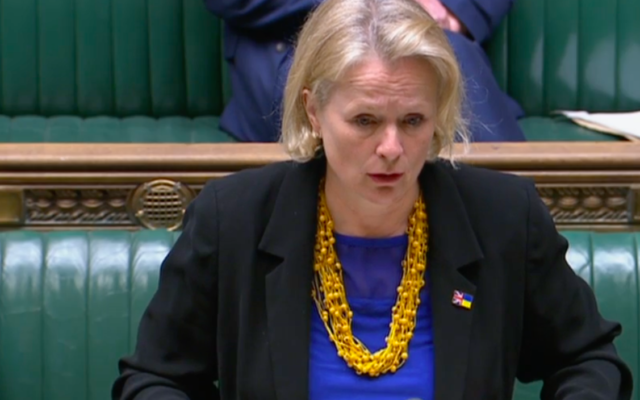 A Government minister has said she would “urge the Palestinian Authority to remove problematic content from its textbooks” after confirming the UK would be taking part in a pledging conference to commit funds for the United Nations Relief and Works Agency.

Minister for Africa Vicky Ford confirmed the UK’s involvement at the pledging conference in New York on June 23.

Asked about the issue of antisemitism in Palestinian textbooks, she added:” We have robust conversations with the highest levels of the Palestinian leadership, challenging them on the need to prepare their population for peace, including by promoting a positive portrayal of others.

“We have zero tolerance for all forms of incitement to violence or antisemitism.”

Ford added:”It is worth pointing out that the UK does not fund textbooks in the Occupied Territories.”

Her comments, made during Wednesday’s Westminster Hall debate on UNRWA, came as the European Union confirmed it had renewed its support for the Palestinian people with a £200 million assistance package.

This was approved after the EU were satisfied with Palestinian assurances over textbooks in the future.

Sarah Champion, for Labour, told MPs she agreed there should be “zero tolerance” of any antisemitism in textbooks.

But she told MPs the EU’s decision suggested “that issue having now been resolved.”

Ford reaffirmed that the UK was a long-standing supporter of UNRWA, and value the vital role it plays as a humanitarian service and a stabilising force in the Middle East.

She said in 2021,the UK provided the agency with over £27 million of support, including £4.9 million to the flash appeal that it launched following the Gaza conflict in May.

Noting it had been a “difficult” decision to reduce the foreign aid budget, Ford said the UK would look in particular at “bringing back humanitarian aid and girls’ education” when it attends the pledging conference.

Ford was also highly critical of Israel actions over the movement of Palestinians into Gaza.

She said:”We continue to stress to the Israeli authorities that restrictions on movement, access and trade for the people of Gaza are damaging the lives of ordinary Palestinians.

“As I will say again and again, we urge all parties to drive for a durable solution for Gaza and take the necessary practical steps to ensure Gaza’s reconstruction and economic recovery. ”

Ford ruled out the idea of applying sanctions on Israel. She told MPs:” We believe that honest and open discussions, rather than imposing sanctions or supporting anti-Israeli boycotts, best support our efforts to get progress on peace and on getting a negotiated solution. ”

The minister added the government ” were totally appalled by the recent terror attacks in Israel.”

She added:” We condemn them in the strongest possible terms, and reaffirm that our thoughts are with the victims and their families.

“We will engage with Israeli and Palestinian leaders to support co-operation on building stability and economic development.”

On Wednesday the European Commission approved a new bilateral allocation to Palestine worth €224.8 million.

This package complements previous contributions, such as €92 million to support UNRWA, bringing the total EU assistance to the Palestinians in 2021 to €317 million.

This does not include a further €25 million in humanitarian funding announced in May.