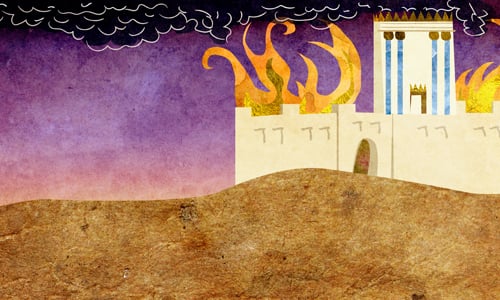 We are currently in what is commonly referred to as “the nine days” leading up to 9 Av – the Fast of Tisha B’Av.

This annual commemoration of the destruction of our two Temples as well as our national sovereignty, which led to exile and dispersion for most Jews is also a time to remember the many other calamities which occurred through the millennia on this particular day.

While thinking about this particular sombre period a rather apt quote I read came to mind: “everything we do has consequences.”

The question at the end of the day is whether we learn from our own actions and the resulting reactions of others.

It should be crystal clear by now that appeasing bullies and those who threaten mayhem never works yet once again this is exactly what is happening. Whether it is Iran, North Korea, China, Russia or our illusory peace partners, the knee-jerk policies of avoiding harsh realities take preference over calling out and dealing with the core root of the problems.

As Iran races towards the finishing line of producing weapons of mass destruction and threatens to flatten not only Israel but also the USA, the Biden Administration dithers and the EU prostrates itself at the feet of the Mullahs of Tehran. European countries, which have a long history of looking the other way when it comes to protecting Jews and have long ago perfected the art of appeasement when bullies threaten, are once again trying every contortionist technique in order to accommodate Iran and ensure continued lucrative commercial profits.

Iran turns off the monitoring cameras and the IAEA chief warns that “Iran’s nuclear programme is advancing at a gallop” but all this elicits is one big yawn on the part of the UN.

Talking about the UN reminds us once again of the dire consequences which result from pretending that this corrupt organization and its associated human rights groups can actually be a force for justice. When Israel can be obsessively targeted and UN-appointed officials spout classic Judeophobic diatribes, the time has surely finally arrived for some decisive action. The unbelievable response that those who are caught articulating Jew hate and conspiracy theories cannot be removed from their positions cannot go unanswered.

Apparently, only when Israel takes steps to defend itself from terror do other countries wake up and burble the usual nonsense. Otherwise it’s business as usual when it comes to Jew bashing.

Our own response also needs to be more robust. Instead of writing letters of protest and appealing to the Secretary-General we should act. How about declaring the UN “persona non grata” and expelling their officials in Israel from the country? They occupy some of the best real estate locations in the country which could be utilized to build much-needed affordable houses.

The best course of action, of course, would be to leave the corrupt UN and let the majority of morally shameful members wreck it themselves. They are going to admit the non-existent State of Palestine anyway so the time is long overdue when the democracies of this world need to gird their loins and act accordingly.

In an ideal world where fairness and justice rules and human rights are genuinely respected this is what would happen.

Unfortunately, nobody, including some of our own politicians, wants actually to follow through by taking a serious stand. As a consequence, we will all sink deeper into the mire of hypocritical rhetoric with all its attendant irreversible situations.

The longer that we continue to swallow the lie that Abbas and the corrupt PA together with Hamas are any sort of partners for a peaceful and secure future the worse the problem gets. Even some brave Arab souls have had enough of the continuing farce. A few lawyers in the PA have recently protested about the complete absence of democracy. The last elections for the legislative assembly in Ramallah and the President took place in 2006, i.e. sixteen years ago. Since then Abbas, that great champion of democracy, has ruled by decree, something these brave lawyers now find intolerable.

Three consequences are bound to flow forth.

Firstly, it is quite likely that some if not all these practitioners of the law will mysteriously be dealt with by the enforcers of Fatah.

Secondly, Abbas and his spokespersons will blame Israel for the lack of elections.

Thirdly, the UN (including New Zealand & possibly Australia) will declare their unwavering belief in the mirage of a democratic Palestinian State living in tolerance and peace in the midst of Judea and Samaria. They will be joined in this farcical performance by our own leftist lemmings as well as the motley collection of NGO’s liberally funded by the usual suspects.

As an added bonus, Abbas has already complained to the Hashemite monarch of Jordan about Israel’s “continuing crimes.” Abdullah in return has assured the PA President for life of his “unswerving support.”

In case the message is still unclear the religious adviser to Abbas proclaimed last week: “the entire area of Al-Aqsa is owned by Muslims only and non Muslims have no right to own even an inch of it. The Western Wall plaza is also part of the holy Islamic waqf and as such cannot belong to the Jews. There is no Muslim in the world who would accept Jewish ownership or sovereignty over the Kotel.” Did you by any chance read or hear any expressions of outrage? Why should the rest of the international community protest at this blatant incitement and pack of lies when our own politicians stay mute? We are being told to cede sovereignty of east Jerusalem (including the Kotel) to the Palestinian Arabs for their “capital.”

Shouldn’t we learn from history and ensure that steps are taken to disabuse our enemies and friends alike of all their false notions?

Failure to do so in a timely manner invites inevitable negative consequences.