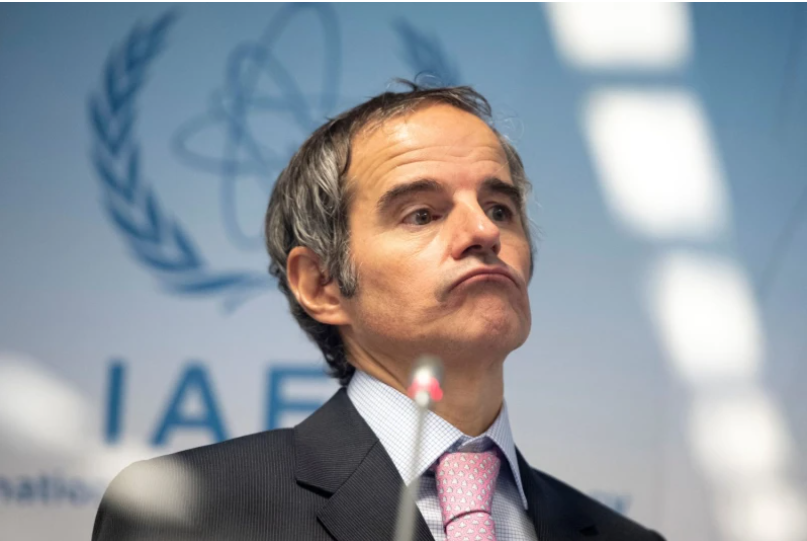 “Grossi is still the main obstacle to the finalization” of a nuclear deal between Iran and six world powers, proclaimed Nour News, an outlet frequently used by Iran’s supreme leader for unofficial commentary. Rafael Grossi, the director-general of the International Atomic Energy Agency (IAEA), may in fact be the last man standing against a shorter, weaker version of the 2015 nuclear deal that would irreparably harm the nuclear nonproliferation regime. Despite imminent pressure from all sides, including Washington, Grossi is refusing to close his agency’s probe into Tehran’s suspect atomic activities to pave the way for the accord’s revival.

Iran demands the permanent closure of the IAEA’s four-year-old investigation before a new deal can unfold, aiming to keep its nuclear weapons work hidden from the prying eyes of inspectors. The IAEA has already given in once: In 2015, the so-called P5+1 group of countries—the United States, United Kingdom, France, Germany, Russia, and China—joined the rest of the IAEA’s 35-nation Board of Governors in a unanimous vote to close the agency’s inquiry into the possible military dimensions of Iran’s nuclear program. The IAEA, led by then-Director-General Yukiya Amano, took this step despite Tehran’s untruthful answers to the agency’s questions.

Thankfully, Grossi has refused to bow to political pressure and repeat his predecessor’s mistake. Now, he must prepare for a potential showdown not just with Iran, but also with the rest of the IAEA’s member countries, including those negotiating the new nuclear deal.

Since 2018, the IAEA has been investigating Iranian activities related to the production of nuclear material at four sites in the early 2000s that the regime failed to declare at the time to the IAEA, as required by Iran’s safeguards agreement with the agency. This legal obligation stems from the regime’s adherence to the Nuclear Non-Proliferation Treaty (NPT), which mandates the IAEA with important safeguarding duties to prevent the spread of nuclear weapons. The investigation is therefore not directly related to the 2015 nuclear accord, formally known as the Joint Comprehensive Plan of Action.

Grossi must prepare for a potential showdown not just with Iran, but also with the other countries negotiating the new nuclear deal.

U.S. President Joe Biden seems so desperate to revive a weaker version of the 2015 deal that he would take a page from the Obama administration’s playbook and agree to temporary nuclear restraints while overlooking Iranian proliferation infractions. Tehran would get sanctions relief worth $275 billion during the first year of the new deal and more than $1 trillion by the start of 2030.

In June, after Iran had initially promised to cooperate with IAEA investigators, Grossi reported that Iran failed to provide “technically credible” explanations for the presence of uranium at three sites. He reiterated on Monday that the IAEA cannot settle its inquiry until Tehran obliges. He stated that the IAEA has a “legal obligation” to continue the investigation and needs to know where Iranian nuclear material and equipment in question are today. He said Iran must “give us the necessary answers, information, access to people and places so that we can clarify the many things that are still in need for clarification.”

In 2018, just before then-U.S. President Donald Trump withdrew the United States from the nuclear deal, the IAEA received new information from Israel about undeclared Iranian nuclear sites. In early 2018, Israel seized a set of Iranian nuclear files detailing that Tehran had a robust nuclear weapons program up until 2003. The archive revealed that under international pressure, the regime downsized and better camouflaged its nuclear weapons activities in mid-2003.

In 2019 and 2020, the IAEA asked Iran for access to three Iranian sites, based on archive information and other evidence suggesting Iran had used or produced nuclear material there. Iran delayed access and tried to sanitize and remove evidence from the three locations, yet inspectors detected human-made uranium at all of them.

A third location, an outdoor warehouse known as Turquzabad, was not mentioned in the nuclear archive. Israel, however, discovered and informed the IAEA about the site, which purportedly held equipment and nuclear material related to pre-2003 activities, including those carried out at Varamin. Iran moved cargo containers from Turquzabad and scraped the grounds before the IAEA asked for access, but the agency still detected the presence of uranium during its visit.

The IAEA also raised questions about Tehran’s activities at a fourth site, Lavizan-Shian, known to the agency as the former headquarters of Iran’s past nuclear weapons program. The IAEA, which learned about this location from the archive, did not request access to the site, which Iran razed in 2003 and 2004, but the agency reported in May that Iran had used the site to work on a uranium metal disc, a step in nuclear weapons development. The IAEA further said that it could not ascertain where the nuclear material once present at the site is today and found Tehran in breach of its NPT safeguards agreement for not disclosing this and other information.

Yet the archive indicates that the IAEA has far more to investigate than these four sites. The Institute for Science and International Security, a Washington-based nonproliferation group, has translated and analyzed the contents of Tehran’s archive and estimates that between 19 and 23 current and former Iranian sites require investigation to ascertain whether the regime maintains nuclear weapons activities banned by the NPT. Importantly, the archive also contains memorandums of meetings by senior Iranian officials discussing where and how to hide ongoing nuclear weapons activities. All of this merits serious international scrutiny.

The P5+1 have reportedly acquiesced to Iran’s last-minute demand to link the nuclear deal’s revival with the closure of the IAEA’s investigation. This is eerily similar to the P5+1’s misguided 2015 decision, as part of the nuclear deal’s original implementation, to close the earlier IAEA probe into the military dimensions of Iran’s nuclear program. In 2015, Amano’s role in ending the agency’s investigation provided the equivalent of a nonproliferation stamp of approval on the nuclear deal. But Grossi is unlikely to follow his predecessor’s flawed approach. He is now the only person standing in the way of world powers willing to sacrifice the global nonproliferation regime for a second time.

Grossi must insist—loudly and publicly—that the agency will resist outside pressure and will not prematurely close its investigation.

Under a revived deal, the P5+1 would reportedly ask Grossi to issue a report on Tehran’s cooperation with his probe before the deal could be re-implemented. It will ultimately be up to the IAEA’s Board of Governors to vote on closing the matter. Even if Iran provides new or additional explanations to the IAEA that are not technically credible, the board can nonetheless vote to close the investigation. Grossi could be forced into the uncomfortable position of speaking out against such a move—in the face of enormous pressure from the world’s major powers to acquiesce.

If Grossi is unsuccessful, with a new deal in place and revenue flowing in, Iran can continue unmonitored, covert nuclear weaponization or missile-delivery activities—all while complying with the accord’s monitored caps on its ability to produce fissile material for weapons. Under the new nuclear deal, Tehran could emerge with a fortified economy and an unstoppable threshold capability to break out to nuclear weapons.

Grossi must insist—loudly and publicly—that the agency will resist outside pressure. He must make clear to the P5+1 that it should not prematurely close the agency’s investigation. It is time to ascertain once and for all whether Iran’s nuclear activities are peaceful. All other issues, including a political nuclear deal, must remain secondary.