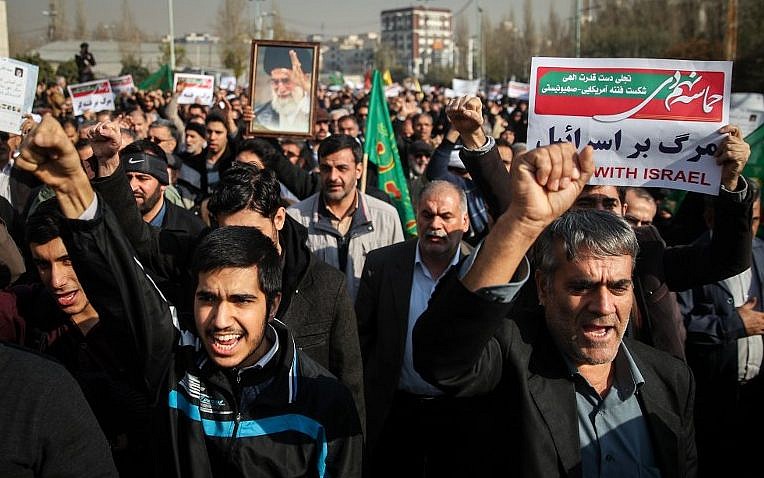 Peace is always at the forefront of our prayers, but at the same time, most of us should have learnt from bitter past experience that being aware of the challenges ahead is a priority.

At this time of the year, when we are about to welcome a new year and prepare for Yom Kippur, it is appropriate that we briefly look back, take stock of the current situation and prepare for the inevitable challenges ahead.

Optimistic visions that the coming year will herald a reversal of the rapidly rising tsunami of Judeophobia thinly disguised as anti-Zionism will no doubt feature in the messages of many communal leaders, lay and religious. While the sentiments may be worthy of all these platitudes will achieve is to induce a sense of complacency and misplaced hope. Unfortunately, if you take the trouble to survey the slippery slide into chaos that currently afflicts international relations, the realistic forecast is far from sunny.

The hope, of course, springs eternal, but until the Messianic age actually arrives, it behoves us to be wary and realistic.

Far too many times in the past, we fell into the trap of being sucked into premature euphoria and then faced subsequent bitter results. The Oslo disaster imposed on us by ideological hallucinatory politicians, instead of resulting in peace, produced terror, murder, a resurrected Arafat and the creation of the myth of a democratic, peace-loving, invented Palestinian entity. Embraced by the lemmings of the left and a hypocritical international community, this episode in futility has become like an albatross to the ancient mariner.

On the other hand, the Abraham Accords have resulted in intensified and warm relationships not only between Governments but, most crucially, between citizens. This is in stark contrast to the “peace” agreements with Egypt and Jordan, where interpersonal interactions are either rare or non-existent. In fact, the Hashemite Kingdom forbids Israelis from openly displaying religious items and actually confiscates tefillin and tallit from Jews at the border. Negative portrayals of Jews, Judaism and Israel still feature regularly in media outlets, which all contribute to a rather lukewarm if not cold peace.

Whether a warm peace will expand to other moderate Muslim countries in the coming year is still unknown. Oman has yet to give permission for EL AL to overfly its territory, which means direct flights between Australia and Israel remain in limbo.

Undoubtedly, until there is regime change in Iran and Islamic-sponsored terror is defeated, the potential for a major conflagration remains. The Iranian President’s questioning of whether the Shoah actually occurred and his regime’s quest to acquire nuclear capabilities and the means to use them must surely be one of the major challenges ahead. Facing an American Administration which is perceived as weak plus European democracies desperate to do business with Tehran, together with Chinese and Russian ambitions in the region, the prospects for a peaceful year ahead are dim.

Israel needs not only to tackle this direct threat but also deal with Iranian surrogates in Syria and Lebanon as well as Gaza, all of them supplied with rockets and itching to launch a conflagration. Add into this mix the corrupt PA and its President for life, liberally supported by an equally corrupt UN, and you have a perfect recipe for chaos and mayhem during the next 12 months.

A perfect example of how morally low the international community has sunk is demonstrated by the fact that the Iranian President will have the red carpet rolled out at UN headquarters in New York, and the media will be falling over itself to provide him with free exposure. It will be interesting to see what sort of a performance the various “progressive” groups, Jews included, perform in the face of Iranian trampling of human rights and terror-sponsored machinations.

Will the New Year give birth to more cockeyed ideas for peace?

If past performance is anything to go by, we can expect continuing sponsorship of a plainly already failed attempt to create a democratic Palestinian Arab State living side by side with Israel in peace and security. This worn-out mantra will no doubt be endlessly regurgitated again despite reality clearly demonstrating that this is an unattainable goal. The Ireland Government this week illustrated the logic of Irish diplomacy. Not only did they embrace Holocaust liar Abbas, but they also intimated that recognition of a non-existent Palestine was likely because, in their own words, “it would have a positive impact on the “peace” process and a two-state solution.” The long-suffering Irish taxpayers will also now have to cough up an extra 2 million Euros in addition to the 6 million Euros donated to UNRWA in order to perpetuate the increasing numbers classified as “refugees.”

As far as the Irish attitude towards Israel is concerned, this can be summed up by the following definition of Irish diplomacy: “the art of telling someone to go to hell and having them look forward to the trip.” Apart from our usual self-flagellators, I doubt any other Israelis lose any sleep over what comes out of Dublin.

As we bid farewell to the current year, the threats confronting Jews worldwide keep increasing, and I am afraid that this will escalate even further. Anti Zionism which is just another form of Jew-hatred, is gaining ground among the ignorant and educated alike. We ignore it at our peril.

On 1 November, Israelis will face yet another election, the outcome of which is still murky and uncertain. The American domiciled President of the World Jewish Congress expressed his dismay at the multiplicity of political parties vying for voters’ approval. He touted the “wonderful” two-party system in the USA as a role model for us to follow. He obviously has no idea that the current Israeli electoral process, flawed though it might be, at least gives minority ethnic groups representation and citizens a wide choice of parties. It also means that we can turf out incompetent coalitions. Looking at the shambles in the USA, where voters only have two choices and where they are stuck with lousy leaders for four years, it’s a no-brainer that we are better off. There is an easy solution to the problem of small parties having inordinate influence. Raise the threshold from 3.2% to 5% and that will mean small parties amalgamating and fewer of them in the Knesset. This will bring more stability to the process of Government.

Hopefully, next year will see even more Olim arriving here. In addition to those fleeing persecution and war, we look forward to increased numbers arriving from so-called free countries. With Judeophobia increasing and Jews being targeted on the streets of Europe and the USA, it is highly likely that young families especially will make the move. We can already see this happening as Jews from the four corners of the globe return to Zion. Another positive phenomenon is the many descendants of secret Jews (Anusim) from the time of the Inquisition and remnants of the lost tribes of Israel returning to the Jewish People and nation. It is a fulfilment of ancient prophecies occurring right now.

As we gather together this Rosh Hashanah, our prayers for universal peace will be as fervent as ever. Unfortunately, they will not be fulfilled unless and until those who promote evil and hate are first thwarted.

Realistically we must be prepared to face tough times. We have been doing that for at least the last two thousand years, and despite enormous sacrifices, we are still here while our adversaries are in the dustbin of history.

May we all be inscribed for a healthy year filled with smachot and positive achievements.