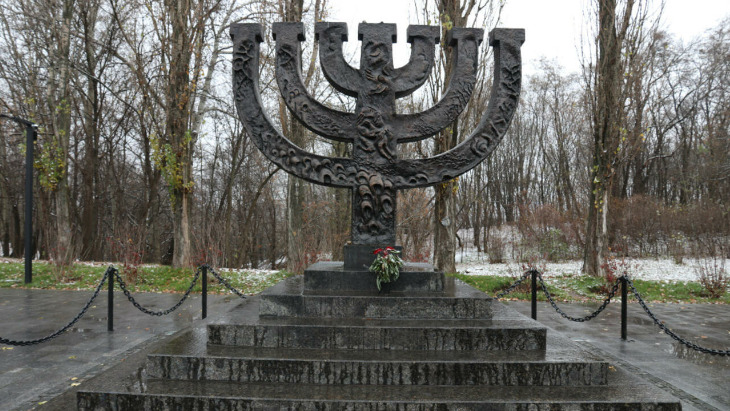 On September 29-30, 1941, the eve of Yom Kippur, the Germans murdered 33,771 Jewish men, women and children in Babi Yar, almost four miles from the center of Kiev, the capital of the Soviet Ukrainian Republic. Although Babi Yar was “not the largest Holocaust era mass-murder site on Soviet soil,” it was significant for two reasons, historian Shay Pilnik explains. Kiev, with a Jewish population of 160,000, was “the hub for Jewish culture,” and the first European capital to become Judenrein (free of Jews) during the Holocaust.

Pilnik quotes historian Lucy Dawidowicz, who remarked that the “unprecedented” pace of the killings, which occurred within 36 hours, is the second reason for Babi Yar’s importance. The numbers established “a record in the annals of mass murder,” she said. At Auschwitz-Birkenau, the total capacity of the four gas chambers and crematoria was a maximum of 6,0000 a day at its peak.

Another justification for Babi Yar’s uniqueness Shay said, was that although the site “was not the largest killing field during World War II in the Soviet Union, the approximate number of 100,000 dead in Babi Yar, the overwhelming majority of whom were Jewish, helped establish Babi Yar’s position as the centerpiece of the Holocaust in the USSR.”

On September 19, 1941 German troops entered Kiev, Dawidowicz noted. They were accompanied by Sonderkommando (special commando) 4a, an advance group of Einsatzgruppe C that had been assigned to Ukraine. By September 25, the entire Einsatzgruppe C had arrived in Kiev. Before the Soviet troops escaped from the capital, they placed delayed time explosives in downtown Kiev. On September 24, the bombs began exploding, engulfing the entire city center in flames. Many buildings were completely gutted and destroyed, with people having to be evacuated. Approximately 25,000 were left homeless.

An Excuse to Murder Jews

The Germans seized the opportunity to accuse the Jews of Kiev of planting the bombs. “Judaism in the East,” Reinhard Heydrich, chief of the Reich Security Main Office [RSHA], advised them, “is the source of Bolshevism and must therefore be wiped out in accordance with the Fuhrer’s aims.” After a meeting with Emil Otto Rasch, Einsatzgruppe A Commander, Sonderkommando commanding officer Paul Blobel had explosives placed under the Dormition Cathedral at the Pechersk Monastery, which destroyed a significant portion of the nearly 900-year-old building, according to historian Richard Breitman.

Blobel then had placards printed instructing all Jews of Kiev to meet on September 29 at 8 a.m. near the Jewish and Russian cemeteries. The notices were distributed throughout the city by the recently recruited Ukrainian militia, Dawidowicz said. She also noted that many people in Ukraine and in other areas of the Soviet Union hailed the German invaders, with some having actively “collaborated in the wholesale slaughter.”

Jews were ordered to bring “documents, money, valuables and also warm clothing, underwear, etc.,” Dawidowicz added. They were told that those who defied the directive would be shot. Like the Jews in other areas of the Soviet Union, the Jews in Kiev had little or no knowledge about the antisemitic designs of the Third Reich. A German intelligence officer observed how Russian Jews were “shockingly ill-informed about our attitude toward them.” Practically everyone assumed they would be “resettled,” since they were to gather near a railroad siding. Some believed the rumors that Germans were sending them to Palestine.

As uninformed as the Jews were about the German ultimate objectives, they began their hopeless march with a sense of uncertainty and apprehension, Dawidowicz said. Some Ukrainians offered to assist their friends, although most watched “with indifference.”

The Procession to Babi Yar

On September 29, Breitman said, more than 30,000 Jews appeared as directed, in spite of the cold weather. The streets leading to the ravine in the northwest part of Kiev were blocked as the Jews were being led to their death. As their food and possessions were being confiscated and placed on mounds, the Jews began to be frightened; panic ensued. “The lines,” Dawidowicz said, “seemed to stop moving, and people were crushed together, exhausted, terrified. The children were crying. Disorder, despair, nightmare.”

Describing the horrifying scene afterwards she said: “Then the Germans began shoving the Jews into new narrower lines. They moved very slowly. After a long walk, they came to a passageway formed by German soldiers with truncheons and police dogs. The Jews were whipped through. The dogs went at those who fell. But the pressure of the surging lines behind was irresistible, and the weak and the injured were trod underfoot. Bruised and bloodied, numbed by the incomprehensibility of their fate, the Jews emerged onto a grassy clearing. They had arrived at Babi Yar; ahead of them lay the ravine. The ground was strewn with clothing. Ukrainian militiamen, supervised by Germans, ordered the Jews to undress. Those who balked, who resisted, were assaulted, their clothes ripped off. Naked bleeding people were everywhere. Screams and hysterical laughter filled the air. Some people’s hair turned gray on the spot. Others went mad in moments.”

The Jews were then led to a narrow ledge near the ravines. Obscured from view, the Germans arranged machine guns so that when the ledge held as many Jews as it could accommodate, they opened fire. Dawidowicz noted, “The bodies toppled into the ravine, piling up layer upon layer. Where once a clear stream flowed, now blood ran.”

The executions lasted for an hour at a time, before the men were relieved, and another group took over. At certain points, the Germans and Ukrainian militiamen went down to the ravine, “trampling over the bodies” to make sure the Jews were dead, pushing them down to allow more to be buried, and then covering the bodies with sand from the quarry.

Murders continued at Babi Yar for a number of months, Dawidowicz said, but never to the extent as on September 29-30, when 33,771 Jews were slaughtered, simply because they were Jews. “Mass murder transforms … the physical environment” observed historian Wendy Lower. “What were rolling hills and sylvan glades in Ukraine became rough craters, death mounds and scorched patches.” There were also ravines like Babi Yar, which were packed with bodies and lime chloride, then sealed by dynamite.

These sites were not in remote areas, Lower points out. Very often, they “encroached on shortcuts and paths that connected towns.” They were locations of interest and of plundering. German men and women used the “meadows for picnics, the forests for hunting, and the swimming holes for cooling off and sunbathing.”

Dawidowicz concluded that “inside the Soviet Union … Babi Yar has come to represent more than the site of a Nazi massacre, one among dozens. It speaks as well to a whole range of Jewish experience in Russia, an often harsh and sometimes bloodstained history that reaches back to pogroms under the czars and on to the arrests and virulent propaganda attacks” in the former Soviet Union.

Dr. Alex Grobman is the senior resident scholar at the John C. Danforth Society, a member of the Council of Scholars for Peace in the Middle East, and on the advisory board of The National Christian Leadership Conference of Israel (NCLCI). He lives in Jerusalem.