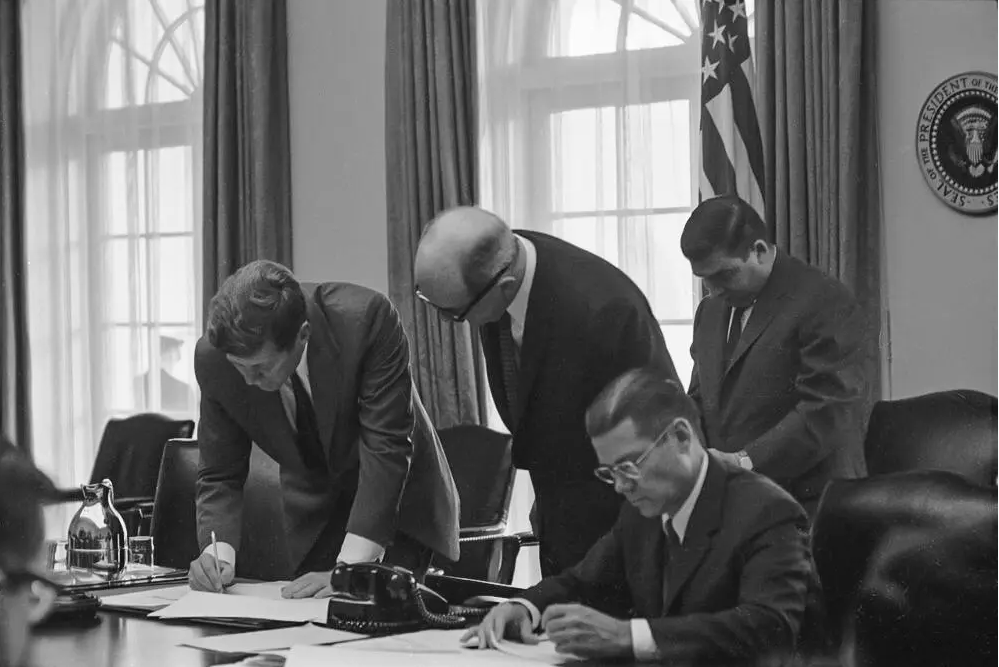 Two nuclear-armed states on a collision course with no obvious exit ramp. An erratic Russian leader using apocalyptic language — “if you want us to all meet in hell, it’s up to you.” Showdowns at the United Nations, with each side accusing the other of essentially gambling with Armageddon.

For six decades, the Cuban missile crisis has been viewed as the defining confrontation of the modern age, the world’s closest brush with nuclear annihilation. The war in Ukraine presents perils of at least equal magnitude, particularly now that Vladimir Putin has backed himself into a corner by declaring large chunks of neighboring Ukraine as belonging to Russia “forever.”

As two countries proceed up an escalatory ladder, mistakes become increasingly likely — as the Cuban missile crisis made clear. In a conventional war, it is possible for political leaders to make significant mistakes and for the human race to survive, battered but intact. In a nuclear standoff, even a minor misunderstanding or miscommunication can have catastrophic consequences.

In October 1962, it was President John Kennedy who declared a naval blockade, or quarantine, of Cuba to prevent reinforcement of the Soviet military position on the island. This put the onus on his Kremlin counterpart, Nikita Khrushchev, to either accept the clearly signaled American condition for ending the crisis (a full withdrawal of Soviet missiles from Cuba) or risk nuclear war.

This time, the roles are reversed: Mr. Putin is seeking to enforce a red line by insisting he will use “all available means,” including his nuclear arsenal, to defend the newly, unilaterally expanded borders of Mother Russia. President Biden has promised to support Ukraine’s attempts to defend itself. It is unclear how Mr. Putin will react to his red line being ignored.

Even if we assume Mr. Putin is a rational actor who wishes to avoid nuclear annihilation, that is not necessarily reassuring. Contrary to popular belief, the biggest danger of nuclear war in October 1962 did not arise from the so-called eyeball-to-eyeball confrontation between Khrushchev and Kennedy but from their inability to control events that they themselves had set in motion.

As I discovered when I assembled a minute-by-minute chronology of the most dangerous phase of the crisis, there were times when both leaders were unaware of developments on the battlefield that assumed a logic and momentum of their own.

Khrushchev never authorized the shooting down of an American U-2 spy plane over Cuba by a Soviet missile on Oct. 27, 1962, the most dangerous day of the crisis. Kennedy was unaware that another U-2 strayed over Russian airspace the same day, triggering Soviet air defenses. “There’s always some sonofabitch that doesn’t get the word,” was how he put it later.

While the war in Ukraine is obviously different from the Cuban missile crisis, it is not hard to imagine comparable failures and miscalculations. A stray shell from either side could cause an accident at a nuclear power plant, spewing radioactive fallout over much of Europe. A bungled attempt by Russia to interdict Western military supplies to Ukraine could spill over into NATO countries like Poland, triggering an automatic U.S. response. A Russian decision to use tactical nuclear weapons against Ukrainian troop formations could escalate into a full-blown nuclear exchange with the United States.

While the U.S. intelligence community has chalked up some impressive successes in Ukraine, most notably its accurate prediction of Russia’s invasion, which occurred on Feb. 24, the 1962 crisis should serve as a reminder of the limits of intelligence gathering. Kennedy was belatedly informed about the deployment of medium-range Soviet missiles to Cuba, but was left in the dark about other equally important matters. He was unaware, for example, of the presence of nearly 100 Soviet tactical nuclear missiles in Cuba targeted on the Guantánamo naval base and a potential American invading force. The C.I.A. underestimated Soviet troop strength on the island and was unable to track the movement of any of the nuclear warheads.

What both Kennedy and Khrushchev did possess was an intuitive understanding of the peril confronting not just their own countries but the entire world if the crisis was allowed to escalate. That is why they maintained a back channel to communicate with each other privately (through the president’s brother, Attorney General Robert Kennedy, and the Soviet ambassador to Washington, Anatoly Dobrynin) even as they denounced each other publicly. It is also why they acted swiftly to reach a compromise deal (kept secret for decades) that involved the dismantling of U.S. medium-range missiles in Turkey in exchange for a Soviet nuclear withdrawal from Cuba.

Like Kennedy, Khrushchev had experienced the horror of World War II. He knew that nuclear war would be many times more destructive. Kremlin archives show that for all his bloodcurdling rhetoric, Khrushchev was determined to find a peaceful solution as soon as it became clear that his nuclear gamble had failed. Mr. Putin, by contrast, has chosen to raise the stakes at every critical point. Escalation has become his preferred tactic.

All this is taking place against the background of a communications revolution that has sped up the pace of warfare and diplomacy, resolving some of the technological challenges faced by Kennedy and Khrushchev but creating new ones in their place. It no longer takes 12 hours to transmit a coded telegram from Washington to Moscow. These days, news travels from the battlefield almost instantaneously, putting pressure on political leaders to make hasty decisions. A U.S. president no longer has the luxury that Kennedy enjoyed in October 1962 of taking six days to consider his response to the discovery of Soviet nuclear missiles in Cuba.

We have not begun to approach the nuclear alert levels that characterized the Cuban missile crisis. While Mr. Putin has talked about putting his nuclear forces on heightened alert, there appears to be no confirmation of unusual movements in that direction. The most dangerous phase of the Cuban missile crisis lasted just 13 days; we are already in the eighth month of the war in Ukraine, with no end in sight. The longer it drags on, the greater the threat of some terrible miscalculation.

Michael Dobbs is a former foreign correspondent who covered the collapse of communism and is the author of “One Minute to Midnight: Kennedy, Khrushchev and Castro on the Brink of Nuclear War.”

The Times is committed to publishing a diversity of letters to the editor. We’d like to hear what you think about this or any of our articles. Here are some tips. And here’s our email: letters@nytimes.com.