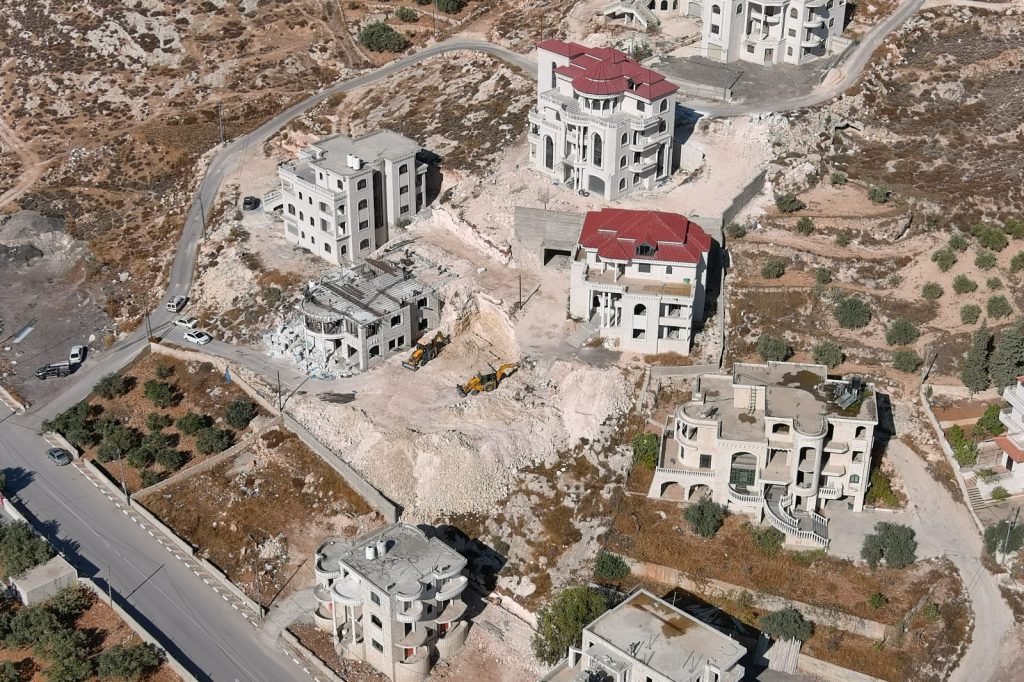 A report released by the Regavim Movement reveals that in 2022, illegal Palestinian construction in Area C, the portion of Judea and Samaria under full Israeli jurisdiction, increased by 80%. The report documents 5535 new illegal structures built in 2022, compared to 3076 structures in the same period in 2021. Regavim: “The Israeli government is creating a de facto Palestinian state.“

In 2022, illegal Palestinian construction in Area C of Judea and Samaria boomed, outpacing the already-alarming rate seen in 2021 by 80%. Regavim’s most recent report, based on data collected through meticulous fieldwork, aerial photography and GIS mapping, compared the situation on the ground in 2021 to that of 2022. The study covered the period of April 2021 through April 2022, analyzing the number of structures, the legal status of the land on which they were built and the jurisdictional lines dictated by international law.

Regavim’s exhaustive study indicates that in comparison to previous years, the data for the most recent period are unprecedented, both in quality and quantity. The structures in built in recent months are not temporary shacks or makeshift shelters that characterized much of the illegal activity in earlier years; in 2022, new Palestinian construction is characterized by “palatial residences, sprawling holiday resorts, amusement and entertainment compounds and event halls, swimming pools and vacation villages, and high-rise residential and commercial towers.” In addition to the mass-scale construction, in many areas development and infrastructure work was carried out to lay the groundwork for future full-scale neighborhoods, such as at Khirbet Khattha near Tarkumiyeh and Lakef near Karnei Shomron.

Regavim studied construction patterns exclusively in Area C, the portion of Judea and Samaria placed under full Israeli jurisdiction in the Oslo Accords framework. At present, according to Regavim’s research, there are 81,317 illegal Arab-built structures in this area, covering an area of approximately 150,000 dunams – twice the total area of Jewish settlement in Judea and Samaria all told, legal and illegal. Illegal Jewish construction stands at 4,382 structures, of which 406 new structures were built in the time period of the new study. Although the disparity in number is striking, it is far overshadowed by the disparity in quality: Whereas illegal Arab-built structures are located in desolate, remote areas far from existing villages or settlement clusters, all of the illegal construction in the Jewish sector is located within the municipal “blue line” boundaries of Jewish settlements.

Analysis of the hard data reveals several additional important facts: Aerial photos show that in Areas A and B – the sections of Judea and Samaria placed under full Palestinian Authority civil jurisdiction under the Oslo framework, there are abundant empty spaces that remain undeveloped and completely un-utilized. Rather than developing these areas, Arab construction has continued to seep into the open spaces of Area C. Additionally, these same aerial photos leave no room for doubt: Arab construction is neither random nor haphazard. Construction is strategically placed, in accordance with the Fayyad Plan, according to pre-established criteria and objectives: Creating contiguous Arab settlement – a pattern that is particularly pronounced in northern Samaria; isolation and strangulation of Jewish communities; construction on the route of planned traffic arteries such as the Funduk Bypass Road and the Tekoa–Ibei HaNachal Access Road in eastern Gush Etzion; construction alongside existing highways, including Route 55 and Route 60, the main roads of Samaria and Judea respectively.