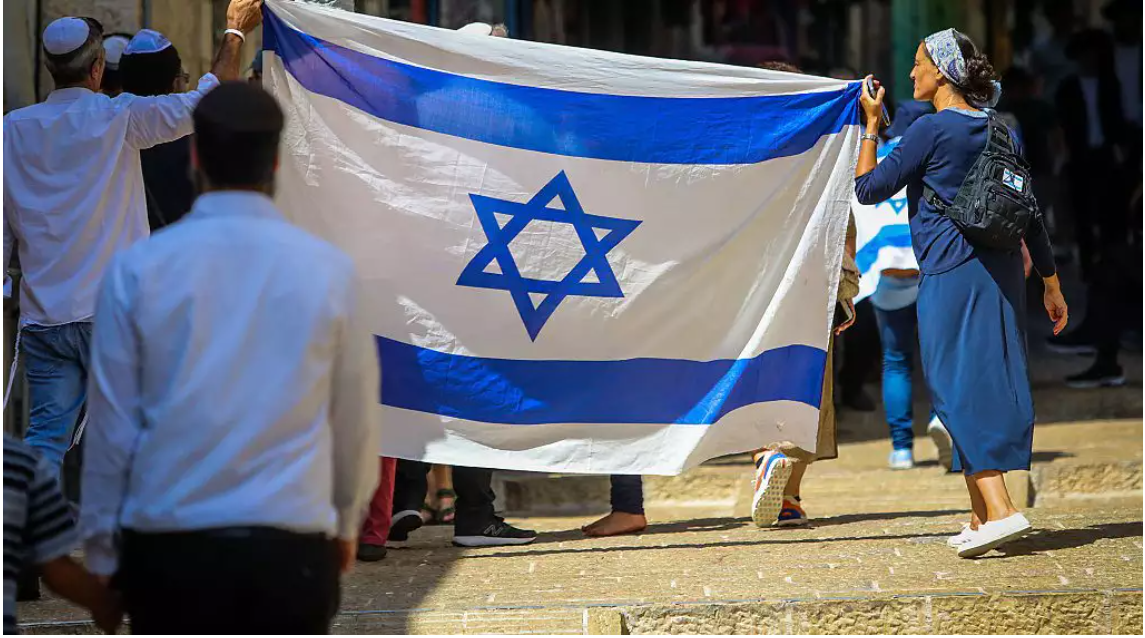 Even though MK Itamar Ben-Gvir has yet to be officially appointed as public security minister, MKs from the incoming opposition are already busy trying to topple him. They are giving advance warning of what is likely to happen on the Temple Mount if the head of the far-right Otzma Yehudit (Jewish Power) faction does assume the role, with their chief concern being the potential nightmare of the government possibly deciding to permit Jewish prayers on the Mount. The most outspoken opposition to this has been voiced by Mr. “Civil Agenda”, head of the Ra’am (United Arab List) party, MK Mansour Abbas, one of the key pillars of the outgoing coalition, who has warned that Jewish prayer on the Temple Mount will spark a war.

Before we continue, let everybody calm down and take a deep breath! This is the year 2022. Jews have been praying on the Mount for five years now; quiet prayers, without provoking anyone, in the south-eastern corner of the Mount, with police authorization, and under police supervision! Have you forgotten? This took time and was implemented gradually, after endless shakeups and material changes on the holy Mount initiated and executed by the Muslims, until the status quo there turned into a fake status quo.

What this raucous bunch of protesters is currently trying to achieve, faced with the return to power of Opposition Leader Benjamin Netanyahu, is to exploit the hysteria surrounding Ben-Gvir to lead us all backwards in the time tunnel and warn of Jewish prayers on the Mount, as though they haven’t been taking place there for a number of years already. To put it in plain English: to put an end to Jewish prayers on the Mount.

Should we briefly recall what has occurred on the Mount since 1967, until the Jews too plucked up the courage to change something in the extremely elastic rules that apply there? So, here then is a brief summary: The Muslims turned the Dome of the Rock into a mosque, which of course originally was not a mosque, and paved large sections of the Temple Mount compound, which is in practice used as a mass prayer hall for tens of thousands. They established three additional mosques on the Mount: the Al-Marwani Mosque located in Solomon’s Stables, in the underground vaulted space along the south-eastern side of the Temple Mount; the ancient Al-Aqsa Mosque underneath the overground Al-Aqsa Mosque; and the Gate of Mercy compound.

The law is optional?

The Muslims have also made a mockery out of the planning, construction, and antiquities laws – which in the initial post-Six Day War period were enforced on the Mount – and have turned them into nothing more than a mere recommendation. To this day, they are enforced there only partially, indirectly and informally. Over the course of the years, they have damaged numerous antiquities on the Mount, on many occasions doing so intentionally, mainly, of course, Jewish antiquities. Former Jerusalem District police chief, Deputy Commissioner Nisso Shaham, when serving as the commander of the holy places, stated that “the Muslims are attempting to destroy any fragment of Jewish memory on the Temple Mount.” The late Shuka Dorfman (former Director of the Israel Antiquities Authority) stated that “Over the years, the Israeli governments have refrained from dealing with these breaches of the law in a proper manner, failing to exercise Israeli sovereignty pertaining to the Temple Mount.” Over the years, all the Temple Mount commanders have pointed out that the Jerusalem Islamic Waqf (the Jordanian-appointed religious authority charged with the administrative custody of the Islamic sites on the Temple Mount) never signs applications for submission to the planning authorities, but transfers them to the police, in a complex procedure that exists nowhere else in the State of Israel.

And that is not all, by a long chalk: Jordan, which at the start of this process was no more than an external contractor, which paid the wages of the Waqf employees on the Mount, has become Israel’s generally quiet, though on occasions extremely loud, partner in managing the Temple Mount (we have written much about this in the past); the Chain Gate and the Cotton Merchants’ Gate to the Temple Mount compound, which were once open to Jews, have now been closed off to them. The visiting times for Jews to enter the Mount have been reduced and restricted to only four and a half hours a day, Sunday to Thursday; a set, defined entrance route for (mainly religious) Jews visiting the Mount has been laid down, and they are prohibited from entering the mosques. The prohibition of raising flags on the Mount has been breached on numerous occasions over the years, as the flags of the Palestine Liberation Organization, Hamas, the Muslim Brotherhood, ISIS and Hizb ut-Tahrir are proudly flown there for all to see.

The prohibition of flying flags on the Mount is enforced, but only if these are Israeli flags. Eventually, the Jews decided that if everything is allowed to change on the Mount, then it is time for a change to counter the blatant discrimination against them with regard to prayers on the Mount. This change has been a bottom-up initiative. Broad sections of the population could no longer bear the humiliating prohibition against Jews praying at the holiest site in their religion. The pressure succeeded. The change occurred. The state has come to terms with it.

And just as it would be inconceivable to remove Muslims praying from the Al-Marwani Mosque and the ancient Al-Aqsa Mosque – two world-changing and status-quo-breaking transformations set in motion by the Muslims on the Temple Mount – it should also be unthinkable to put an end to the quiet Jewish services on the Mount. If under the tenure of Omer Bar-Lev as minister of public security the police understood this well and Jordan has swallowed this bitter pill, then during the renewed tenure of Netanyahu and perhaps that of Ben-Gvir as the minister of public security – this is certainly something that should not be entertained. Now, when the government is just about to change, is not the time to make any declarations, but simply to carry on, and to politely – but emphatically – dismiss the scenarios of war and doom being bandied about by Abbas and his friends.

Once, when the entire Left in Israel was Zionist – people such as Ya’akov Hazan, the late leader of the socialist Mapam (United Workers) Party; Motta Gur, ex-IDF chief of staff and subsequently one of the leaders of the Israeli Labor Party, and perhaps no less important the commander of the IDF paratroopers brigade that liberated the Temple Mount in 1967; or the founder of the dovish religious Meimad Party Rabbi Yehuda Amital – it understood that any proper arrangement requires Jewish prayers on the Mount.

Gur, for example, said that when a final status agreement would be on the agenda with the Palestinians, “It is inconceivable that Jews will not be able to pray on the Temple Mount.”

The US State Department, during US President Barack Obama’s administration, did not wait for a final status agreement. In its 2012 Report to Congress on International Religious Freedom, it was clearly stated that Israel discriminates against Jews on the Temple Mount, preventing them from praying there. The “Deal of the Century” proposed by former US President Donald Trump in January 2020, also mentioned the option of exercising the right to Jewish prayer on the Mount. Yehiel “Hilik” Bar, the former secretary general of the Labor Party, initiated together with Likud MK Miri Regev a bill to enact formal regulation of Jewish prayers on the Mount, but he withdrew his support for it under strong pressure from the Israel Security Agency (the Shin Bet).

So, don’t change history just because of the hysteria or only because Ben-Gvir might be coming. If something needs to change regarding the Temple Mount as a result of the change of government, it should be on something else: a response to the virulent incitement spurring on the modern blood libel of “Al-Aqsa is in danger”.

In recent years and indeed in the last few months, this fabrication has been the excuse used by hundreds of terrorists, whether by shooting, stabbing, or vehicle ramming attacks, to justify their desire to go out and murder Jews.

The preachers on the Mount, and those elsewhere too, who brainwash these terrorists with this barefaced lie, bear the responsibility for the acts of terrorism no less than the perpetrators themselves. They are turning this pernicious blood libel into a serial generator of terrorism.

It is for this reason that they should be in jail. This could, by the way, be one of the more welcome changes to be put into effect by Ben-Gvir, if he is indeed appointed.

The quiet, unobtrusive Jewish prayers held on the Mount – the prized possession that the Jews managed to procure only a few years ago after the Muslims made strategic changes on the Mount – should of course be left alone, and nothing should be done to reverse the course of history or for that matter to distort it.