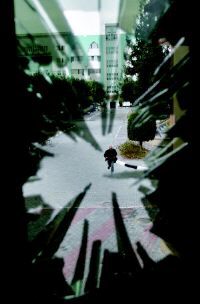 Twenty-five people died (four of whom were children), 230 were injured, dozens were kidnapped, heavy damage was done to public institutions and universities and military installations were torched.

That is only some of the price that the Civil War that has been raging since Thursday in the Gaza Strip has exacted.

Pillars of smoke filled the air, gunfire sounded incessantly, snipers stood on the rooftops of buildings, and there were tremendous explosions. That was what Gaza looked like this weekend.

Palestinian Authority Chairman Abu Mazen and Hamas political bureau director Khaled Mashaal spoke on the phone and decided to restore calm, but the battles on the streets of Gaza continued to rage nonetheless. The two men are scheduled to meet in Saudi Arabia tomorrow in an attempt to end the crisis and to establish a national unity government. The meeting between the two men in Damascus two weeks ago ended in failure. Fatah officials said yesterday that they were pessimistic about the prospect of ending the violence and establishing a national unity government.

Over the weekend, three cease-fire agreements were signed with the assistance of the Egyptian security delegation, but all of the efforts to bring about reconciliation ended in failure and the battles were renewed. Immediately after emerging from a meeting with Hamas representatives over a cease-fire agreement, senior Fatah officials, including the commander in the security forces in the Gaza Strip, Rashid Abu Shubak, and Samir Mashrawi, a high-ranking Fatah commander in Gaza, were attacked. More than 100 bullets struck their cars, which were bulletproofed, thus saving their lives.

The academic institutions in Gaza have become a battlefield in the Civil War. On Thursday, Fatah militiamen attacked the Islamic University in Gaza, a Hamas stronghold. The Fatah militiamen discovered to their surprise that a military installation had been built on the campus grounds, including a rocket-construction factory and a bunker that contained dozens of rocket-propelled grenade launchers, grenades, mortar shells and hundreds of Kalashnikov assault rifles.

The battle over the Islamic University lasted a number of hours, and Hamas’s reaction was not long in coming: on Saturday, Hamas militiamen burst into Al-Quds University, a Fatah stronghold, and torched rooms and classrooms. Shortly thereafter Azahar University, also a Fatah stronghold, was attacked with rocket-propelled grenades and anti-tank rockets. The buildings were severely damaged.

The military installations were also attacked by the vying parties. Hamas militiamen attacked the Preventive Security Service headquarters in the northern Gaza Strip and destroyed it. A Force-17 base was also torched and destroyed, as was another Fatah headquarters in the northern Gaza Strip. Hamas militiamen tried to break into the Palestinian security forces main base in the Saraiya compound, but the Fatah forces repelled the assault. Fatah responded with a number of attacks on institutions affiliated with the Hamas government, causing heavy damage to the Palestinian Interior Ministry and Agriculture Ministry.

The streets of Gaza were emptied of residents, who were afraid to leave their homes given the exchanges of fire on every street corner.

For the first time since the IDF last raided the Gaza Strip, journalists were forced to walk the streets of Gaza while wearing bulletproof jackets and helmets. Even the corridors of Shifa Hospital, where the injured were tended to, became part of the battlefield. On Saturday night, after a respite of a few hours, Fatah and Hamas gunmen returned to the surgical ward of the hospital, and waged a fierce gun fight on the scene.

UNRWA has shut down schools so that pupils won’t have to study under a hail of bullets.

The violent incidents in the Gaza Strip spilled over once again into the West Bank (Judea and Samaria) in the city of Jenin, where a Hamas official was kidnapped, and, in Nablus, Fatah members nabbed the dean of the Islamic law department in A-Najah University. Hamas spokesmen said that riots would erupt if the kidnapped men were not released.

The current round of violence began on Thursday afternoon. The Presidential Guard, which is directly subordinate to Abu Mazen, brought into the Gaza Strip a convoy of trucks that contained logistical equipment from Egypt, but Hamas was certain that it contained advanced weaponry. Hamas militiamen attacked the convoy and killed three Presidential Guardsmen. That evening, in revenge for the attack on the Islamic University, Hamas militiamen launched an additional attack on the Presidential Guard. The target that was selected was the Kureish boot camp, near where Netzarim once stood. There were 600 unarmed new recruits on the base at the time of the assault.

The Hamas militiamen positioned themselves in adjacent buildings that overlook the open base, and began to fire mortar shells and rocket-propelled grenades at the new recruits. Concurrently, Hamas snipers opened fire at members of the security forces who tried to rescue the new recruits. The attack lasted 24 hours, in the course of which more than 300 shells were fired at the base.

In the course of numerous street battles, Hamas militiamen killed a brigadier general in the General Intelligence Service. Hamas militiamen surrounded the headquarters in which the high-ranking officer, Abdel Kader Salim, was holed up along with 15 of his men. Eyewitnesses reported that the Hamas militiamen assured him, “in God’s name, we won’t hurt you,” but he refused to believe them. Only after a moderator arrived did Salim surrender, but when he went out into the street, he realized that Hamas had no intention of keeping its promises. Salim fell back into his base and said to his assailants: “I’m not going to die in the street, kill me here in my headquarters.” In response, Hamas militiamen fired sprays of bullets at him and killed him.

Tirawi Strikes Rajoub With His Shoes

On Saturday night, the Fatah Revolutionary Council convened in Ramallah. The issue on the agenda was the national unity government and the crisis with Hamas.

Dozens of Fatah members, including a number of senior party officials, went to the mukataa to take part in the debate. Among the participants were Jibril Rajoub and Tawfik Tirawi, who are widely believed to be bitter enemies. Tirawi, apparently, was unhappy with the veiled criticism that Rajoub had aired against him recently. Rajoub said that there were elements within Fatah who were trying to bring the war in Gaza into the West Bank as well, hinting that the people to whom he was referring were Tirawi and his supporters. On Saturday, before the debates began, Tirawi capitalized on the opportunity to express his displeasure. He drew close to Rajoub and said to him: “I’ve got a message for you from the Fatah children who were killed in Gaza.” He removed his shoes and struck Rajoub with them, who remained stunned in his seat.

The Egyptian general prosecutor, Hisham Badawi, announced on Saturday that the Israelis are Daniel Levy, Kamal Kusba and Tuncay Bubay. He said that Levy held a Canadian passport and the two others are Turkish nationals. The Egyptian suspect is Mohammed Issam Ghanem el-Atar, 31. Arrest warrants have been issued for the three men who escaped.

The Egyptians charge that the three men recruited el-Atar for the Mossad back in August 2001, while he was studying in Turkey. He helped him obtain a Canadian residence permit under an assumed name. In addition, they found him a job as a bank clerk. The prosecutor claims that during his work there, al-Attar passed to his handlers financial and private information about Egyptian citizens and certain Arabs who had bank accounts there. In exchange, they paid him in cash.

After several years during which el-Atar worked for the Mossad, his handlers turned him into a recruiter of agents. The Egyptians claim that in all, the Mossad paid him $56,000 from the time he was recruited in August 2001 until his capture a month ago. It has been reported that el-Atar was arrested at the Cairo airport when he came for a family visit on Jan. 1. “The suspect had been under surveillance and investigation since January 2002,” the general prosecutor told the official Egyptian news agency. “He will stand trial in the high court for state security.”

The Egyptian statement did not mention the role of the other three suspects except that they had recruited Mohammed el-Atar. The Egyptians also said nothing about the people upon whom the cell spied, nor did they explain whether any espionage activity had taken place on Egyptian soil. Nor did they give any details about where el-Atar worked to recruit agents or what his goals were.

The incident was not covered prominently on the Arab news channels.

They dealt mostly with the terror attack in Iraq, in which 135 people were killed by a one-ton car bomb. The shaky situation in the Gaza Strip also received more coverage in the Arab media on Saturday.

The 28 years of peace between Israel and Egypt have been characterized by a series of similar incidents of espionage. Israel has never admitted to any of them. The most famous incident was the arrest of Azzam Azzam, an Israeli textile worker. Azzam was arrested in 1996, tried and sentenced to 15 years in prison. He received presidential clemency and was released after approximately eight years.

In March 2004, a court for security matters sentenced Walid Lutfi Hashem, a 29-year-old lawyer, to 15 years in prison. The prosecutor accused him of having sent a fax to the Israeli embassy in which he offered to gather information in exchange for money. The prosecutor claims that Hashem asked for $2,500 for every piece of information.

Two years before that, in May 2002, Magdi Anwar Tawfik, a mentally-disturbed man of 52, was arrested after offering his services to the Israeli consulate in Alexandria. In November 2000, an Egyptian engineer, Sharif Filali, was arrested and charged with having spied for the Mossad. Although he was acquitted, President Mubarak ordered a retrial, in which Filali was sentenced to 15 years in prison.

Meanwhile, the Israeli Foreign Ministry braced itself Saturday night in concern over a diplomatic crisis with the Egyptians. The ministry has a great deal of experience with diplomatic crises over the alleged use by Israeli agents of foreign passports.