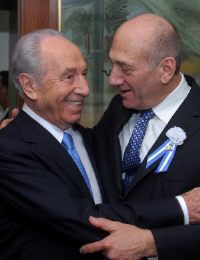 Jerusalem – On Sunday, Shimon Peres, a 48 year veteran of Israel’s Knesset parliament, was sworn in as Israel’s ninth president.

Although Peres is nearing his 84th birthday, the largely symbolic institution of the Israeli presidency is about to change.

Peres has formulated a 100-day plan that details the projects and the subjects he plans to address in his new position. The goal is to insert a new dimension into the presidency and to restore the public’s faith in this institution, which was badly damaged during Moshe Katsav’s term.

Peres declared that he does not intend to be a ceremonial president but instead be very active. “He is going to work very hard,” his associates said Tuesday. “He won’t give up the many ceremonies he is required to attend, but he will put real content into the presidency and will be an influential president.”

Here are the details of Peres’ 100-day plan:

Desks: A number of desks will be established that will deal with a variety of subjects, including a Diaspora desk, a foreign policy desk and an Israeli Arab desk.

Projects: Peres intends to lead a series of national projects and to help raise funds from all over the world to pay for them. These projects will be in various science areas, including nanotechnology, solar energy, medicine, environmental science, homeland security and others. Peres will also continue to be part of the Peace Canal project between the Red Sea and the Dead Sea.

Jewish world: Peres intends to invest effort in the connection between Israel and the Jewish Diaspora. One plan is to host an annual conference of Jewish leaders to discuss problems relating to the fate of the Jewish people.

PR: Peres plans to be quite active in international PR to improve Israel’s image around the world. He will represent Israel in foreign countries. The foreign ministry is already deluged with invitations for Peres to visit from countries competing to be the first to receive the new president.

Unity of the people: Peres will invest great efforts in healing the rifts among the people: Between Jews and Arabs, religious and secular, and right and left.

Foreign policy: Peres does not plan to drop his “vision” of peace, which was best articulated by his 1993 book The New Middle East, where he envisions economic arrangements as the panacea for all future prospects of peace and reconciliation.

Peres will also coordinate closely with Prime Minister Ehud Olmert. That doesn’t mean he will not meet with Arab leaders, but his close associates say that “he does not plan to surprise Olmert. Peres will do all he can to help from the outside.”