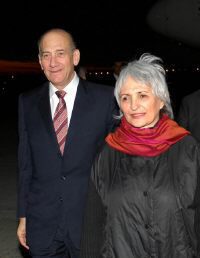 Jerusalem – Israeli Prime Minister Ehud Olmert arrived in the U.S. yesterday and said that Israel would take a positive view of Syrian participation in the Annapolis conference and negotiations with Syria after the conference if the conditions were ripe. Speaking to reporters on his plane before takeoff for the United States, Mr. Olmert said that the meeting in Annapolis would make it possible to begin comprehensive and in-depth negotiations with the Palestinians in order to realize the principle of two national states for two peoples.

In Washington, delegations from across the world continue to arrive for the Annapolis conference. The French News Agency reports from Riyadh that Washington proposed to the Arab countries that they come to the conference to set up a committee to monitor progress on the Palestinian issue and that another conference be held in January in Moscow. According to the report, issues related to Syria and Lebanon will also be raised at the conference. However, it is not yet clear whether Syria will send representatives to Annapolis. Lebanon will send a delegation in spite of opposition from Hezbollah. This was announced by the Lebanese minister for culture, Taek Methi.

The Israeli police have raised their level of alert to one degree below the highest, and this will remain in force until the end of the Annapolis conference.

Syria had delayed its decision to participate in the Annapolis conference until the last moment, but that isn’t going to change the diplomatic import of this conference. Peace between Israel and Syria will not come from there, and it is very doubtful whether a breakthrough will be achieved through this channel. Over the past several days, the Syrians have been fighting to get the subject of the Golan Heights on the conference table despite the United States’ intention to leave it on the sidelines. From Damascus’s perspective, this is not a war over the Golan Heights but rather a war over its honor in which stronger powers – the United States and Israel – prefer to play in the Palestinian arena at the moment. Even if the Americans decide to give the Golan Heights a higher priority than they did, the Syrians will not go back home happy. At least not this week.

Mr. Olmert has hinted in closed talks that the negotiations with Syria could be renewed “in the very near future.”

High-ranking political sources predict that the negotiations with Syria will be renewed after the conference in Annapolis. They will be held with the blessing of the United States and perhaps even under the auspices of the U.S. administration.

The talks between Mr. Olmert and Syrian President Bashar Assad are being held through Turkish mediation. They have recently been renewed and were defined in closed talks by Mr. Olmert as a “serious matter.”

Israel’s former IDF Chief of Staff Lt. Gen. Moshe Yaalon said the release of hundreds of Fatah terrorists was a gesture toward the commencement of the Annapolis summit this week and also in the hope that Israel’s three kidnapped soldiers would be released.

Lt. Gen. Yaalon said, however, the gesture would prove to be an error, both in moral and in practical terms.

Lt. Gen. Yaalon said in an interview with Israeli Army Radio: “If this debate is conducted in a rational manner, we must not capitulate. Look, in the past we announced that we wouldn’t negotiate with kidnappers. That’s what stopped the kidnappings. The fact that we have been capitulating to kidnapping again and again and again has brought us more kidnappings.”

Lt. Gen. Yaalon said he suspected that Mr. Olmert was promoting diplomatic initiatives in order to divert attention from police investigations of his activities.

Senior security establishment officials warned on Saturday that the aftermath of the Annapolis conference could lead to a violent takeover by Hamas of Judea and Samaria and to a deterioration of the situation to the point of chaos. Assessments by security officials were given to members of the security cabinet during a meeting that dealt with the Annapolis conference’s ramifications for Israeli security.

Israeli intelligence official Yuval Diskin warned that the failure of the process could lead the international community to support the creation of a bi-national state in the territory between the Jordan River and the Mediterranean Sea, which would change the demographic balance of the region. The security cabinet ministers also heard surveys from the chief of staff and from the director of the IDF intelligence branch that presented a fairly gloomy prediction regarding the chance of a breakthrough with Palestinian Authority chairman Mahmoud Abbas either at Annapolis or later. All the officials who offered their assessments cast Mr. Abbas as a leader whose operational ability was next to nil. Security officials shared the opinion that if Israel preserves the status quo, Mr. Abbas’ moderate regime will end.

Security officials said that while reaching an agreement with the Palestinians during Mr. Bush’s term is of paramount strategic significance for the state of Israel, a series of security principles must be preserved. Even if an agreement is reached, they said, it must not be implemented too quickly, since the Palestinians are not ready for that.

Although the Annapolis conference has not yet begun, that has not kept Hamas from threatening an escalation in the armed struggle against the “Zionist occupation” after its conclusion. Khaled Mashal, deputy director of Hamas’ political bureau, and his deputy, Moussa Abu Marzuk, said on Saturday that their organization would intensify the terror attacks against Israel immediately after the conference. “The stage that will come after the Annapolis conference will be an escalation in operations of armed resistance of all kinds and methods in the West Bank and in the Gaza Strip, against the Zionist occupation,” he said.

Mr. Abu Marzuk had harsh criticism for the Annapolis conference and also for Mr. Abbas, who is running to an arrangement with Israel that continues its “crimes” against the Palestinians. “While Abu Mazen meets with Prime Minister Ehud Olmert and smiles for the reporters’ cameras, the occupation forces continue their aggression in the West Bank and the Gaza Strip and continue padding the settlements and expropriating new land around Jerusalem, continue digging beneath the blessed al-Aqsa Mosque and continue building the separation fence,” Mr. Abu Marzuk said, voicing his opposition to going to Annapolis.

Mr. Abu Marzuk predicted that Mr. Olmert would not give anything in principle to Mr. Abbas during the negotiations and that he “cannot carry out any measure connected with a final status arrangement such as a Palestinian state, Jerusalem, settlements and refugees.” Therefore, Mr. Abu Marzuk called upon all the Palestinians wherever they live to hold marches and rallies against the Annapolis conference and in favor of “adhering to the permanent national rights.”

While Mr. Abu Marzuk threatens terror attacks, his boss, Mr. Mashal, prefers to work in other channels in order to sabotage the Annapolis conference two days before it begins. The London-based Al-Hayat newspaper reported this morning that Mr. Mashal sent a letter to the leaders of Arab countries and to the secretary-general of the Arab League, Amr Moussa, calling for them to boycott the conference, which, in his opinion, constitutes “a free concession in exchange for nothing.”

The newspaper reports that some of the content of the letter that Mr. Mashal sent to the Arab leaders and to Mr. Moussa has to do with meetings that he held last week with a high-ranking Iranian official. In accordance with that, Mr. Mashal wrote in the letter that the conference comes within the framework of damage to Iran and preparations for military escalation against it.

Like his deputy, Mr. Mashal wrote in the letter that the Israeli government’s position regarding the final status topics and the interim status of the Palestinians has not changed. Mr. Mashal said that there is a “real danger” that threatens the final status topics connected with Jerusalem, the settlements, and the refugees’ right of return. Mr. Mashal added that the conference is taking place in the shadow of a “Palestinian split and unequal circumstances between the Israeli and Palestinian sides.” This is in addition to the absence of a Palestinian consensus.

The assertive message is directed at Mr. Abbas, even though he is not mentioned by name. Mr. Mashal wrote in the letter that no one has a national mandate to begin profound negotiations with Israel in light of the fact that objective data show no fundamental change in the positions of Israel or the United States, and because there is complete disregard of the Arab peace initiative.

Today and tomorrow, Hamas will host a conference of terrorist organizations to protest against the Annapolis conference. The Hamas conference will be attended by representatives of the rejectionist organizations and heads of the big families in Gaza. “Nobody has the right to concede the Palestinians’ rights,” Mr. Barhoum said.

Has Bush Reneged On Firm Commitments To Israel?

In April 2004, then-Prime Minister Ariel Sharon informed the Israeli government that “there is American recognition that in any permanent status arrangement, there will be no return to the ’67 borders. This recognition is to be expressed in two ways: understanding that the facts that have been established in the large settlement blocs are such that they do not permit a withdrawal to the ’67 borders and implementation of the term ‘defensible borders.'”

Now there is a serious question about the exact standing of that Bush commitment to “defensible borders,” ever since Mr. Bush’s secretary of state, Condoleezza Rice stated on Nov. 13: “I believe that most Israelis are ready to leave most of the – nearly all of the West Bank, just as they were ready to leave Gaza for the sake of peace.” She said this even though public opinion polls actually show strong Israeli support for retaining strategic areas of the West Bank, like the Jordan Valley.

In that light, Dore Gold, former Israeli ambassador to the U.N., has noted that “it’s critical for Israeli diplomacy to protect the Bush letter against those who seek to undercut and replace it with a new set of Israeli-Palestinian documents. Israelis have learned from their experience with Gaza what can happen to their most vital security interests if they are not safeguarded at the same time that far-reaching territorial concessions are made.”

Indeed, the speech that President Bush is expected to give in the basketball stadium at Annapolis will call for the establishment of a Palestinian state, an end to the occupation and an Israeli return to the 1967 lines, with a narrow opening for a land swap.

Expectations rose a little over the weekend, when the schedule for the conference was announced, and when it was learned that the country that everyone is trying to please, Saudi Arabia, was going to honor the conference with the high-level presence of its foreign minister.

However, whether Saudi Arabia will cancel its active state of war with Israel remains to be seen. The same goes for the Arab League, which has announced that it will attend the summit in Annapolis.

The Bulletin called the Arab League office in Cairo and asked if the Arab League was still maintaining its long standing state of war with Israel, which was declared on the day that Israel declared independence in 1948. The answer was affirmative.