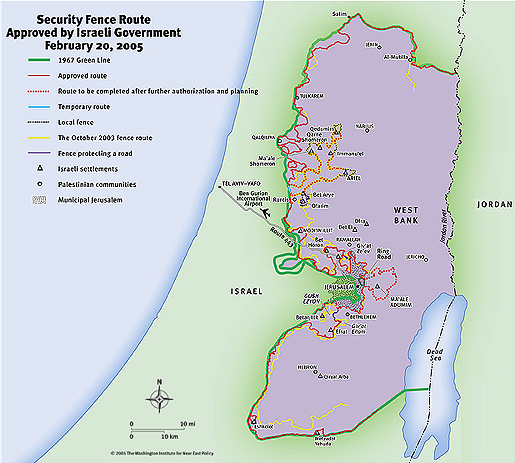 This past week in Israel, Israeli soldiers from elite Israeli army units erected huge signs on their barracks which proclaimed they would refuse orders to remove Jewish communities, if ordered to do so.

These soldiers were arrested and thrown into jail. The families of the soldiers expressed solid support for their sons, telling the Israeli media that an order to expel people from their homes and communities is both illegal and immoral and must be disobeyed.

The momentum behind these new protests emanates from a February 20, 2005 decision of the Israeli government to redraw the map of Jewish residency in the areas that Israel acquired in the aftermath of the 1967 war. In August 2005, in the first stage of implementing this new map, Israel dispatched elite soldiers from its own Israel Defense Forces, the IDF, to forcibly remove the residents from 21 thriving Jewish communities in the Katif district of Gaza, along with 4 Jewish communities in Northern Samaria.

The new maps means that an additional 63 Jewish communities may now be expelled in their entirety by the IDF. These communities are spread throughout Samaria, Judea, Hebron and the Jordan Valley, demarcated on the National Geographic Atlas as the “west bank”, alluding to the west bank of the Jordan River..

Now, with negotiations intensifying, and with Israeli Prime Minister Netanyahu clamping down an almost total freeze on Jewish building starts in all areas of Samaria, Judea, Hebron and the Jordan Valley, rumors abound that Israel is about to order the IDF to complete the February 20, 2005 Israel government decision to expel Jewish residents of these 63 Jewish communities.

However, Israeli law allows a soldier to refuse an order if that soldier deems the order to run against the grain of the conscience and moral code of the soldier.

Israel is the one nation that apply the letter and the lesson of the legal and moral code that emerged from the Nuremberg Trials, which established the principle that a soldier cannot just say that he was following orders, if these orders are illegal and immoral.

Two sharp precedents loom on the horizon where the Nuremberg principles were indeed applied in Israel.

The first was a 1956 incident in the Israeli Arab village of Kfar Kassam, which occurred while Israeli troops were engaged in full scale combat with Egypt. A curfew had been clamped on the village. A truckload of Kfar Kassam villagers violated the curfew, returning from war after dark. The IDF local commander gave an order to shoot the curfew breakers. More than fifty villagers were shot to death by IDF troops. The Central IDF Command determined that the IDF officer who had given this order had issued an illegal an immoral order. Every IDF soldier involved in the operation, down to the lowest private, was indicted by the IDF court and charged with carrying out an illegal and immoral order, in what came to be known as the Kfar Kassam massacre legal precedent.

The second precedent can be ascribed to activism of the Israeli writer, Amos Kennan, who passed away this past August at the age of 82..

Kennan served as a reservist in an IDF unit, north of Jerusalem. following the 1967 war. A senior IDF officer gave an order to demolish some of the Arab villages in the Latrun area where his unit was based. Kennan refused the order. Facing possible court martial, he went one step further, and

galvanized support from all walks of Israeli life in opposition to this order, and the order was reversed.

Writing in the October 1968 issue of Midstream Magazine, publication of the World Zionist Organization, Kennan wrote a seminal piece entitled A LETTER TO ALL GOOD PEOPLE, in which Kennan related that “the action that I undertook was in flagrant violation of any military law. According to military regulations I should have been court-martialed. I have not diea what would have been the sentence of a Red Army soldier were he to violate national and military discipline in such a manner…”

After the village demolition orders were rescinded by the IDF, Kennan added in the piece that he asked for and received permission from the IDF to visit every area that Israel acquired after the 1967 war, to make sure that no orders like that would ever be issued again.

In passionate support of Kennan’s assertion that Israel cannot demolish communities, Prof. Eliav Schochetman, Dean of the Shaari Mishpat Law College in Israel, testified in 2005 at Israel’s Knesset Parliament Law Committee that any decision of Israel to demolish Arab or Jewish communities would represent a clear “human rights infraction “ which violates Israel’s own “Basic Human Rights Law” which oversees Israeli democratic institutions in matters of human rights and civil liberties, in the same way that the US Bill of Rights ensures that the US government can never trample on the human rights and civil liberties of American citizens.

In his testimony, Schochetman noted that this Israeli government decision to demolish Jewish communities, because of its new map, represented a blatant violation of the 1948 Universal Declaration of Human Rights, to which all democratic governments are adherents.

Prof. Schochetman cited clause 9 of the Universal Declaration of Human Rights, which mandates that it is illegal for sovereign governments to expel their own citizens and ethnic minorities from their homes, from their private properties or from their farms. Since the only group that Israel now slates for expulsion are Jews, it should be recalled that the government of Serbia was held liable for international prosecution at the International High Court of Justice in the Hague, under the charge of “ethnic cleansing”, after leaders of Serbia singled out one ethnic minority for expulsion, solely because of their religion.

After Schochetman’s testimony at the Knesset, the Knesset Law Committee could not find a single law professor in Israel who could or would contradict Schochetman’s assessment of the Israeli government’s intention to destroy and exile entire communities would indeed represent a massive human rights violation

That is why the claim of some Israeli soldiers that an order to expel entire communities would present them with an illegal and immoral order that must be disobeyed.