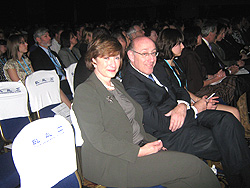 Rhonda Spivak, an attorney and a writer, is a member of the Canadian and Israel Bar Associations. How did the General Assembly of United Jewish Federations [GA] originally land President Barack Obama as a speaker? That’s the question that GA delegates were talking about amongst themselves the Saturday evening in the lobby of the Marriot Wardman Hotel in Washington, the evening before the GA began.

The “off the record” answer on everyone’s lips was Kenneth Feinberg. He and his wife DeDe were the GA co-chairs, and Kenneth, an attorney, is known as the Obama administration’s “pay czar.” He was appointed by the U.S. Treasury Department to determine the U.S. Treasury’s compensation for executives at seven companies that are still using money from the Troubled Asset Relief Program: Citigroup, AIG, Bank of America, General Motors, Chrysler, GMAC and Chrysler Financial. In short, Feinberg is responsible for cutting the bonuses of the executives who owe their survival to political intervention.

But Feinberg’s pull wasn’t enough to stop Obama from cancelling his expected appearance. At 8:30 the evening before the GA was set to begin, delegates received notice that Obama would be attending the memorial service for the U.S. soldiers killed at

Fort Hood, and was unable to re-arrange his schedule to appear at another time [Rahm Emanuel, the Whitehouse Chief of Staff spoke in his place.]

In the opening plenary of the General Assembly, Feinberg discussed his role as the “pay czar”.

Referring to this unofficial title,” he said “My grandmother in Lithuania would have been very confused.”

Feinberg, a former Chief of Staff for U.S. Senator Ted Kennedy, noted that the economic signs of the American economy are “uncertain.” While there are some signs of economic recovery, there’s “unemployment in double digits’, and overall “it’s a mixed bag.”

Feinberg concluded, “If I gauge this right, the reason people are so interested in what I’m doing…is because it’s a litmus test of public discontent.” He explained that in total he is “required by law” to determine the pay for only just over “700 people.”

“But every time I make a determination, it is on the front page,” he said.

He attributed this to the fact that there are conflicting views about his role. On one hand, there are people who believe that “it’s a bad idea” for the government “to be doing this,” while on the other hand, there are those who say that since “we the taxpayers invested in these companies” and bailed them out, so “we own them and are creditors who have every right to determine compensation.”

Feinberg, who was previously appointed by the U.S. government under President Bush to administer the 9/11 Victim Compensation Fund, referred to his current task as “a challenge.”

“But when President [Obama] asked me to do it, I do it. Just like when De De Feinberg told me to be here, I’m here [at the GA].”

While many delegates found Kennneth Feinberg’s address to be interesting, others felt it was out of place at the General Assembly.

As Avi Bublick, an 18 year old student from Miami attending American University in D.C. said, “We had the pay czar speak to us. I guess he spoke to defend his job. But it didn’t seem like the right forum for this.”

JEWISH LEADERS HAVE A PRIVATE MEETING WITH OBAMA

While Obama did not address the G.A, he did meet with about 50 Jewish Federation leaders at the White House on the evening of November 9, before leaving for Fort Hood.

When asked whether a statement about the meeting was issued, DeDe Feinberg, who met with Obama, said “No statement was issued.”

When asked what transpired at the event with Jewish leaders, Feinberg answered, “Speak to the media people [of the Jewish Federations of North America]. I’m uncomfortable with speaking.”

Hannah Rosenthal, a GA delegate from Madisson, Wisconsin, said, “I am sure the discussion [Obama had with Jewish leaders] was a frank future looking discussion. I don’t think statements were needed.”

But, Simeon Botwinick, and Max Saltzman, student delegates from Yeshiva University in New York, said that since Obama was to have attended the G.A. and spoken to all delegates, it would have been preferable if the delegates had been given some information about what was discussed at Obama’s meeting with Jewish leaders.

“Why not promote transparency?” Saltzman said.

Michael Gelman, Chairman of the Executive Committee of the Jewish Federation, who was one of the leaders who met with Obama, said, “Obama said a few words and mostly shook hands. The meeting was only 15-20 minutes. Obama brought other members of his staff who were there, and people could meet them also.’

However, in a press release sent out by the Jewish Federations of North America the evening after the meeting, Jerry Silverman, president and CEO of the organization said in a statement, “ We were thankful to have an opportunity to directly discuss a number of our concerns with the administration’s senior team and look forward to continuing to reach out to them in the future to ensure that the voice of the Jewish community is heard loud and far in Washington.”

Laurence Boloton, a 30 year old GA delegate, said he understood why Obama couldn’t be at the GA, and noted that “he showed his commitment by meeting with Jewish leadership.”

Boloton wondered whether maybe Obama ought to have sent his vice-president Joe Bidon to the GA, “but I don’t know what Bidon was doing.”

But, Ben Novogaski, age 22, from Vermont, who voted for Obama, said, “But this wouldn’t be an issue if Obama had made a public appearance at a Jewish group in the last year. I like the effort he has made in trying to repair the U.S. image. It was necessary to make an effort with the Muslim community, but he could have made a major appearance to a Jewish group since he’s been elected, but he hasn’t.”

When asked if he would vote for Obama again, he replied “Good question. It’s too soon to tell. But I wouldn’t have given him the Nobel Peace Prize.”

Rabbi Avi Fried [orthodox] from New York, said he thought their was no issue about the fact that Obama had to cancel or about what was said in his meeting with Jewish leaders.

But Bublick, said “I am concerned that Obama wasn’t at the GA. Quite frankly, I think it could have been worked out that Obama was here at some time during the GA. I know he met with Jewish leaders as a compromise, but Obama has not been as strong a supporter of Israel as previous administrations. It has raised questions for me. I think a lot of [Jewish] people are thinking twice about Obama, and re-thinking his support for Israel.”

OBAMA AND NETANYAHU’S PRIVATE MEETING: NO PRESS, NO PHOTO OP On the morning before Rahm Emmanuel was set to speak at the GA, Bob Kunst and an orthodox Jewish friend, both from Shalom International, were standing outside the Marriot Wardman Hotel, with signs saying ‘OBAMA-EMMANUEL-GENERAL ASSEMBLY: JERUSALEM AND ISRAEL ARE NOT YOURS TO GIVE AWAY”, “CAN’T TRUST OBAMA. APPEASING MUSLIM TERRORISTS.” “ BIBI BE A JEW, DON”T GIVE UP WHAT GOD GAVE US.”

Kunst said, that “ Obama is not good for the Jewish people. Instead of coming to the GA, what did he do? He sent us Rahm Emmanuel, who Bibi has referred to as a self-hating Jew as reported in Ha’aretz last July. Why is there no mention of Bibi’s visit [yesterday] in any of the Washington newspapers. Obama didn’t have a press conference with Bibi, or make a statement or have a photo with him. It’s as if Bibi wasn’t here. And the Federation leaders are making it seem as if Obama is being good to Israel”

Kuntz had a lime green button that said “OBAMINATION.”

When asked what kind of reaction he was getting from GA delegates who passed by, Kunst answered, “A lot of people support what we are doing,” but “we’ve also gotten a nasty reaction from a lot of other people who are upset that we are out here.”

Ori Nir, spokesman for Americans for Peace Now in Washington, dismissed the relevance of Kutz’s protests outside, but said “The way in which Netanyahu’s meeting with Obama occurred reflects the deep divisions between the two governments about the approaches to the peace process.”

Saltzman said, “I heard Ori Nir say that Bibi was treated like a thief who came in at night, and he’s right.”

Saltzman, Botwinick, and Hannah Robinson, all said that given that Obama’s approach favours “open dialogue,” this late night meeting with Netanyahu without press was inconsistent with that approach.

Ben Hood, a GA delegate studying at Queen’s University said, “I don’t care about there being no photo op, as long as Bibi and Obama get work done. That’s what counts.”