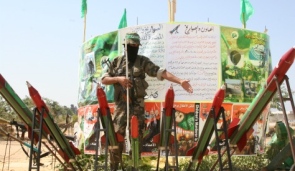 The revolutions in the Arab world, especially the Egyptian security forces’ diminished control in the Sinai, have allowed the Palestinians to exponentially increase their weapons smuggling into the Gaza Strip, senior defense officials say. A Hamas man stands with an exhibition of Qassam rockets in Gaza.
Photo by: Natasha Mozgovaya

Anti-aircraft missiles could impinge on the unchallenged freedom of Israeli planes and helicopters over Gaza’s skies. For years, the air force has been assuming that Gaza militants might have such missiles, but there has been no evidence that such weapons have been fired.

In recent years much of the weapons smuggling into Gaza has been coordinated by Iran, rising steeply after the Israeli withdrawal from the Strip in 2005. The Iranians have operated on two main routes. One has been by sea, from the Persian Gulf to Sudan and from there in convoys to Egypt and the Strip. The other has been by air, from Tehran to Damascus via Turkey, and then to the Syrian port of Latakia, to Alexandria and on to Gaza.

Israel has responded by taking over cargo ships on the open sea, and, according to foreign reports, by attacking weapons convoys in Sudan from the air. Such operations have forced Iran to reconsider its moves.

But the civil war in Libya opened new opportunities for weapons smugglers after the Libyan army lost control of vast weapons stores in the east of the country. Local arms dealers made contact with Gaza smugglers, and new weapons began to flow by a much shorter and easier route than the ones originating in Iran.

Dichter said the construction of the steel fence on the Rafah border, which Egypt began in the last year of Hosni Mubarak’s rule, had been stopped, and parts of it were already being dismantled by the Bedouin.

He said Iran and Hamas want to concentrate large stores of weapons in Gaza and, when the opportunity arises, to deliver them to the West Bank.