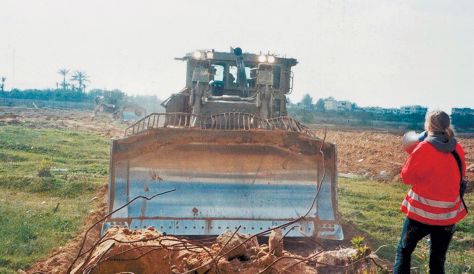 Reprinted from 2003. Published in Makor Rishon and in the Jerusalem Post (2003).

A news story which shocked the world this week dealt with the crushing of American citizen Rachel Corrie by an IDF bulldozer, who ostensibly blocked with her body a bulldozer about to demolish the home of a Palestinian terrorist in Gaza, made huge headlines all over the world. I asked to speak with the spokesman of International Solidarity Movement Mike Shaik, who passed me on to Lynn Clausen, a 24-year old resident of Washington from the Christians Peacemakers Team based in Hebron, which trains the ISM volunteers.

Shaik and Clausen sent me to speak with Corrie’s friends who were with her at the time she was crushed. Corrie’s friend Joe Smith described me how Corrie sat on a mound of dirt facing the IDF bulldozer making its way to the house it was about to demolish.

“Rachel had two options”, Smith says. “When the bulldozer started to dig in the dirt pile, the pile started to move, and she could have rolled sideways quickly or fallen backwards to avoid being hit. But Rachel leaned forward to climb to the top of the dirt pile. The bulldozer’s digging drew her downward, and its driver could not see her anymore. So without lifting the scoop, he turned backward and she was already underneath the blade”

Smith’s description is very important, since the picture published by Reuters shows Corrie standing to the left of the bulldozer, in a location where the driver can see her very clearly, as she holds a megaphone in her hand. Beneath the picture’s caption is written: “Photographed before Rachel Corrie was run over by an IDF bulldozer.” Everyone who looks at the picture and the text understands that the driver, who sees the American civilian standing in front of him, just kept on going, crushing her to death. But Joe Smith says that the picture was taken hours before she was run over, which happened at 5:00 p.m., and not a few minutes beforehand. Smith emphasizes that at the time of the incident and during it, there were no photographers in the area.

After I checked the pictures that Reuters distributed to the world’s newspapers, I noticed the difference between the colors of the sky in the picture where Corrie stands with the megaphone and the one that shows the body after the incident. The time the picture was taken also appears in text on the Internet site, saying that it was in the morning. It is not noted that the incident took place hours later.

I called Reuters’s photography department and asked for an explanation.

The Reuters photography editor added that he wrote clearly that the pictures had been taken by ISM.

I pointed out to him that no such notice appeared in the pictures I saw on the Reuters site. I asked the director general of Reuters in Israel, Tim Heritage, whether Reuters has a set policy of using pictures provided by political organizations, and Heritage replied that it is widespread.

Heritage promised into check the matter of the misleading picture that was taken before the incident and asked me to call him back in an hour.

After an hour, Heritage was no longer available to speak with me. I went into the Reuters website and was amazed to find that the pictures of Corrie had been removed.

Thus the American woman who came to protect the homes of Palestinian terrorists with her own body was wiped out twice: once by an IDF bulldozer and then by the Reuters agency, which came to “document” the incident.

The damage the agency caused still requires repair. A picture is worth a thousand words. The picture of Rachel Corrie with the megaphone, standing before the bulldozer of the “cruel Zionist occupier”, who was “crushed after this picture was taken”, as Reuters falsely wrote, will be engraved in the memories of those who follow events in the Middle East.

[By no strange coincidence, the web site of the International Solidarity Movement, at www.palsolidarity.org, features the picture of Rachel Corrie, holding her proverbial megaphone, with a caption which says that Rachel was in the clear sight of the bulldozer driver before he ran her over. Yes, five hours before…] Rachel Corrie in front of IDF vehicle, five hours BEFORE she was crushed by another IDF vehicle Rachel Corrie at the time of her death

These pictures were sent out by Reuters in sequence, and gave the impression that Rachel was mauled by the bulldozer after she had been standing with a megaphone in hand, in clear view of the bulldozer driver which ran her down.
search.news.yahoo.com/search/news?p=Rachel&b=41&c=news_photos

Center for Near East Policy Research
551 POSTS0 COMMENTS
© A WEBstationONE.com production, partially funded by the Internet Development Fund and the IDF Link technology. © 2003-2020 All rights reserved. Articles and Special Reports on IsraelBehindTheNews.com are copyrighted. Every reader is welcome to reprint any and all articles, and with citation.
MORE STORIES

Explain how a US adminstration that officially seeks peace by means...

Center for Near East Policy Research - August 12, 2022
Explain how a US adminstration that officially seeks peace by means of a two state solution (one Jewish, one Arab) keeps dumping money into...