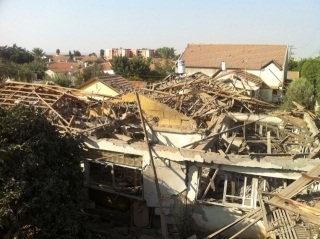 Days and nights in southern Israel have been punctuated by a growing number of sirens and rocket explosions, with over 60 rockets striking Israeli cities and communities this past week. On Monday morning alone, 55 Qassam and mortar shells were fired from the Hamas-controlled Gaza Strip on the Jewish holiday of Simchat Torah. The rocket strikes damaged buildings, properties and a kibbutz petting zoo that is usually filled with children, but was empty because of the early morning hour.

For residents in Netivot, Sderot and the Gaza-border communities, the rocket routine is not a new one.

On Tuesday night, three rockets were fired, with one towards the city of Netivot and the others landing near Sderot, which has been the target of rocket attacks for nearly 12 years. Speaking with Tazpit News Agency on Wednesday, Netivot resident, Elisheva Ratzon described the panic she experienced the previous night.

“I was on the computer, reading on the news that a rocket had struck Sderot earlier, when all of the sudden, the rocket siren for Netivot went off,” said Ratzon. “It was about 10:30 at night and the rocket struck just as I ran into the shelter in my apartment. There was an extremely loud boom. ”

Sitting at her computer in her office where she works as an accountant, Ratzon explains that she still experiences great panic every time a rocket strikes her city. “It’s a difficult experience, but even more so when my grandchildren come for a visit. Then I get even more nervous. This situation is especially tough for families with young children.” The desert city of Netivot is home to over 27,000 residents and is located approximately 14 kilometers (9 miles) away from Gaza. Although there were no casualties or damages from Tuesday night’s rocket attack, a Netivot home was severely damaged in a direct Grad rocket attack two weeks earlier on September, which was miraculously empty at the time. Another home was also damaged.

Over 500 rockets have been fired at Israel since the start of 2012.

“Life is not easy here,” says Daniel, Ratzon’s nephew, who is a student at a religious boys’ seminary (yeshiva) in Sderot. “If we didn’t have the Iron Dome in place, to shoot down the Grad rockets targeting larger cities, like Ashkelon, Ashdod and Beer Sheva, the situation would be much, much worse.”

“Right now we are living on prayers, miracles and the Iron Dome,” he said.