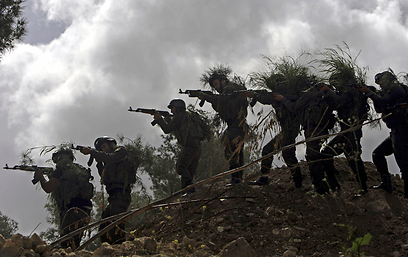 British Ambassador to Israel Matthew Gould is doing all he can for the Palestinian army, which he claims plays a crucial role in the establishment of a Palestinian state. He is urging Israel to transfer authority to the Palestinian army in areas B and C and reveals that the UK “invests in training the Palestinian security forces…We have senior and experienced officers embedded in Palestinian training academies.” But this reminds the Jews of other “experienced” British officers, such as Glubb Pasha and the other British commanders who built the Jordanian army and commanded over it during its invasion of the Land of Israel with the goal of thwarting the UN’s partition plan. These forces destroyed Gush Etzion and the Jewish Quarter in Jerusalem and killed thousands of soldiers and civilians.

The Jews also remember the words of anti-Semitic general Evelyn Barker, commander of the British forces in the Land of Israel: “(We) will be punishing the Jews in a way the race dislikes as much as any, by striking at their pockets and showing our contempt of them.” Before Barker, during the pogrom of 1920, Col. Waters Taylor, financial adviser to the Military Administration in Palestine, explained to Mufti Haj Amin el-Husseini that if disturbances of sufficient violence occurred in Jerusalem during Easter, both General Bols (chief administrator in Palestine, 1919-20) and General Allenby (commander of the Egyptian force, 1917-19, then High Commissioner of Egypt) would advocate the abandonment of the Jewish Home. Waters-Taylor explained that freedom could only be attained through violence.

Following the riots he told Jerusalem Mayor Moussa Kazim: “I gave you a fine opportunity; for five hours, Jerusalem was without military protection; I had hoped you would avail yourself of the opportunity, but you have failed.” This was how the murderers’ phrase “Dola Maana” (the government is with us) was coined. It even preceded the phrase “itbach al Yahud” (slaughter the Jews).

We also remember that Jews who tried to protect themselves were tried and imprisoned by the British Mandatory Government, including Jabotinsky, who was sentenced to 15 years in prison and was permanently exiled.

There was also the decorated British officer Roy Farran, who, along with his comrades, kidnapped, tortured and murdered teenager Alexander Rubowitz and disposed of his body. The British authorities acquitted Farran from the charge of murdering Rabovitz on the ground that since the body of the boy had not been found there was no case against him, despite the fact that they had a written confession. And there was also the British officer who murdered Avraham “Yair” Stern, who was unarmed. There was also the British unit which controlled the area in which a convoy en route to Mount Scopus was attacked. The British soldiers did not lift a finger until the Arabs murdered 78 people. It is difficult not to think of these officers when you hear that the British are once again building Arab forces in the Land of Israel. Britain never apologized. In our days, civilized countries apologize: For the slave trade, discrimination against blacks and the annihilation of the Indians. The Germans apologized for the Holocaust and France apologized for the crimes of the Vichy regime. Britain, before it offers us advice, should prove that it is sincere and convince a persecuted nation with traumatic memories that there is a new Britain – a Britain that recognizes its past crimes against us and regrets them.

The British never apologized for tearing away three-fourths of the Jewish Home’s territory in the Land of Israel or for refusing to allow this vast territory to be used to resolve the “Palestinian problem,” instead of cutting even more into the Kivsat Harash (poor man’s lamb) that remains in the western part of the Land of Israel. They have not apologized for their role in the Hebron massacre of 1929, when British officer Cafferata stood by and allowed 67 Jews to die in agony. They haven’t apologized for not opening the gates to the Land of Israel during the Holocaust, which could have saved the lives of millions of Jews; they haven’t apologized for the 759 people who drowned when the MV Struma sank; or for the 4,554 Holocaust refugees aboard the SS Exodus who were expelled back to Germany and were imprisoned there; or for the 52,000 people who were held in Cyprus for months and years.

Mr. Ambassador, with such a past and no regrets, how do you expect us to believe that your advice is not merely a continuation of the old British policy, which is aimed at pushing the Jews out of their land by any means possible?