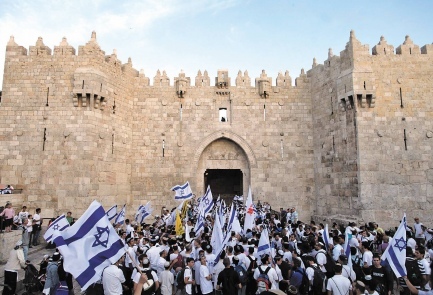 Jerusalem, my friends, is the greatest, most justified Israeli settlement there ever has been and ever will be. When celebrating Jerusalem Day tomorrow, we ought to leave discussions about “demographics,” “security needs” and “natural growth” at the door.

Instead, let’s talk about the very nature of our connection to the city itself, from the time of King David, through the First and Second Temples, to modern independence in 1948, through the Six-Day War, and up to today. To put it simply, let’s not trip over our words. Let’s not apologize.

The acceptable discourse and language are appropriate for days when we’re not celebrating. But on a day like this, remembering from where we came and where we’re headed, we need to talk about our right, our birthright, to this city of ours. Our connection to it is rooted in our religious faith, in our history and in two thousand years of recollection and longing. The Jewish presence in Jerusalem never ended. As former Prime Minister Menachem Begin said, “More than Israel watches over Jerusalem, Jerusalem watches over Israel.”

Oh, how right he was: Jerusalem is and has been the DNA that runs through the veins of Jewish people all over the world. Jerusalem was a magnet to us, a compass, a glue, the weave forming the Jewish people’s most characteristic memory, in which our justice and inherent right were embodied and are embodied until today. Without Jerusalem, our right to the land of Israel is eroded.

On this day, we need to retell again and again the Jewish story of Jerusalem, a story that is unparalleled. Without it our nation would never have been resurrected here, in Israel. Every day, Jews in the Diaspora reminded themselves of the holiness of the city: during the morning, afternoon and evening prayer services, at funerals, circumcisions and bar mitzvahs, in the blessing over food, at weddings, and on holidays. The Jewish people swore and swear to this day, “If I forget thee, O Jerusalem, let my right hand wither.”

Islam, which now claims Jerusalem and its holy places, entered the scene some 2,000 years after Israel became a nation. The Palestinians — who are claiming east Jerusalem, including the Old City and the Temple Mount, as their capital — only began to define themselves as a nation within the last century. After the occupation of the lands of Canaan ended around the 13th century B.C.E., the Jews ruled over this land of Israel for some 1,000 years. Jews have lived in Israel for the past 3,300 years. Throughout this time, Jerusalem has always been the Hebrew capital.