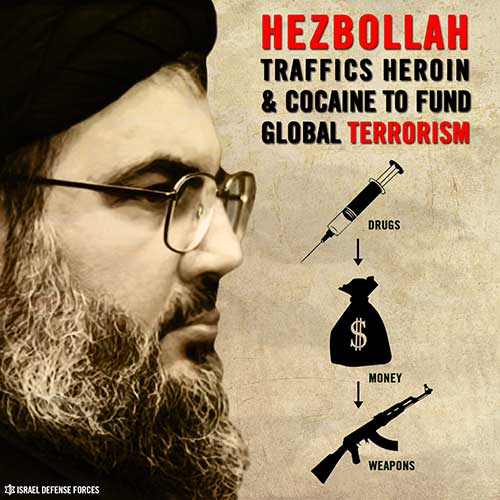 To mark this year’s International Day Against Drug Abuse and Illicit Trafficking, the IDF Blog examines how Hezbollah supports many of its terror activities – through illicit drug sales across the globe.

Today, the United Nations marks the International Day Against Drug Abuse and Illicit Trafficking. The day is about much more than preventing drug addiction. It also highlights a pressing international concern – organizations selling drugs throughout the world. Hezbollah – a terror group which seeks to destroy Israel – is one such organization. The group finances its terrorism using a sophisticated drug-trafficking operation. Despite the world’s objections, Hezbollah continues to profit from its drug sales. Stopping its drug trafficking could be a major step toward preventing its global acts of terror.

Hezbollah primarily earns its profits through drug sales in Latin America, but its activities have been traced across multiple continents. The group combines its drug profits with proceeds from legitimate used-car sales in West Africa. Until it was uncovered by officials, this global money-laundering scheme effectively masked Hezbollah’s earnings.

Concerns about Hezbollah’s crimes are growing throughout the international community. In April of this year, the United States Treasury Department took action against Hezbollah for working as a drug cartel. The department also blacklisted two Lebanese financial institutions, accusing them of transferring tens of millions of dollars to the terror group.

As American officials revealed last Tuesday, one of the banks agreed to pay the United States $102 million to settle a lawsuit involving Hezbollah’s money laundering scheme.

In 2001, international intelligence sources identified Lebanese residents operating for Hezbollah in South America’s tri-border area (Argentina, Paraguay and Brazil). The area has become a major source of funding for Hezbollah’s terror activities. In October 2008, investigators took down a cocaine smuggling operation in Colombia, noting that “profits from the sales of drugs went to finance Hezbollah.”

In 2011, the U.S. government seized drug profits linked to Ayman Joumaa, a drug trafficker and money launderer, linked to Hezbollah. His network was earning as much as $200 million per month. More recently, in June of this year, four Lebanese men were sanctioned for effectively acting as “ambassadors” for Hezbollah in West Africa.

Hezbollah’s drug trafficking remains a major threat to the international community. In recent months, the group has stepped up its activities while political turmoil in Syria, a close ally and funder, has intensified.

On this day, as the world takes a stand against drug traffic, it is important for us all to understand where Hezbollah is sending its profits. Drug money funds Hezbollah, which murders innocent people through terrorism around the world.