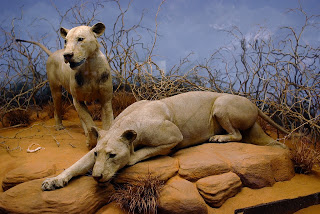 (Cross-posted at The Times of Israel ) Colonel John Patterson was an Irish soldier and engineer assigned to Kenya by the British Empire at the turn of the twentieth century. His job was to supervise the construction of a bridge over the Tsavo river for a massive railroad project. Unfortunately, railroad workers were constantly being slaughtered by the most notorious man-eating lions in recorded history. Two maneless but huge lions, working together, were estimated to have killed and eaten well over a hundred people working on the railroad.

Night after night, Patterson sat in a tree, hoping to shoot the lions when they came to the bait that he set for them. But the lions demonstrated almost supernatural abilities, constantly breaking through thorn fences to take victims from elsewhere in the camp, and seemingly immune to the bullets that were fired at them.

Patterson was faced with the task of not only killing the lions, but also surviving the wrath of hundreds of workers, who were convinced that the lions were demons that were inflicting divine punishment for the railroad. At one point, Patterson was attacked by a group of over a hundred workers who had plotted to lynch him. Patterson punched out the first two people to approach him, and talked down the rest!

After many months, Patterson eventually shot both lions. He himself was nearly killed in the process on several occasions, such as when one lion that he had shot several times suddenly leaped up to attack him as he approached its body. He published a blood-curdling account of the episode in The Man-Eaters of Tsavo, which became a best-seller, and earned him a close relationship with US President Roosevelt.

Upon returning to England, Patterson was a hailed as a hero. When World War One broke out, however, Patterson traveled to Egypt and took on a most unusual task: forming and leading a unit of Jewish soldiers, comprised of Jews who had been exiled from Palestine by the Turks. As a child, Patterson had been mesmerized by stories from the Bible. He viewed this task as being of tremendous, historic significance. The unit, called the Zion Mule Corps, was tasked with providing supplies to soldiers in the trenches in Gallipoli. Patterson persuaded the reluctant War Office to provide kosher food, as well as matzah for Passover, and he himself learned Hebrew and Yiddish in order to be able to communicate with his troops. The newly-trained Jewish soldiers served valiantly, but the campaign against the Turks in Gallipoli was ultimately unsuccessful, and the Zion Mule Corps was eventually disbanded. In 1916 Patterson joined forces with Vladimir Jabotinsky to create a full-fledged Jewish Legion in the British Army, who would fight to liberate Palestine from the cruel reign of the Ottoman Empire and enable the Jewish People to create a home there. The War Minister, Lord Derby, succumbed to anti-Zionist agitators and attempted to prevent the Jewish Legion from receiving kosher food, from serving in Palestine, and from having “Jewish” in their name. Patterson promptly threatened to resign and risked a court-martial by protesting Derby’s decision as a disgrace. Derby backed down and Patterson’s Jewish Legion was successfully formed. During training, Patterson again threatened the War Office with his resignation if his men (many of whom were Orthodox) were not allowed to observe Shabbos, and again the army conceded. Meanwhile, Patterson brought Rabbi Avraham Yitzchak Kook to address and inspire his troops. Patterson clashed repeatedly with antisemitic officers in the British Army. Once, when a visiting brigadier called one of his soldiers “a dirty Jew,” Patterson demanded an apology, ordering his men to surround the brigadier with bayonets until he did so. The apology was produced, but Patterson was reprimanded by General Allenby. On another occasion, Patterson discovered that one of his Jewish soldiers had been sentenced to execution for sleeping at his post. Patterson circumvented the chain of authority and contacted Allenby directly in order to earn a reprieve. The reprieve came, but a notoriously antisemitic brigadier by the name of Louis Bols complained about Patterson’s interference to General Shea. Shea summoned Patterson and, rather than discipline him, revealed that his children were great fans of The Man-Eaters of Tsavo. The Jewish Legion fought well, and Palestine was liberated from the Turks. But Patterson himself was the only British officer in World War One to receive no promotion at all – a result of his outspoken efforts on behalf of the Jewish People.

After the war, Patterson dedicated himself to assisting with the creation of a Jewish homeland. The achievements of the Jewish Legion gained sympathy for the cause, but there was much opposition from both Jews and non-Jews. One Jewish delegation, seeking to explore an alternate option of creating a Jewish homeland in Africa, was dissuaded after reading The Man-Eaters of Tsavo. Meanwhile, against Patterson’s strenuous efforts, Bols was appointed Military Governor of Palestine, and filled the administration with antisemites who attempted to undermine the Balfour Declaration and empowered hostile elements in the Arab world.

When World War II broke out, Patterson, now an old man, fought to create another Jewish Legion. After great effort, the Jewish Infantry Brigade was approved. Aside from fighting the Germans, members of the Brigade succeeded in smuggling many concentration camp survivors into Palestine. Many other survivors had been cruelly turned away, and Patterson protested this to President Truman, capitalizing on his earlier relationship with Roosevelt. This contributed to Truman’s support for a Jewish homeland. Patterson spent most of his later years actively campaigning for a Jewish homeland and against the British Mandate’s actions towards the Jews in Palestine. Tragically, he passed away a month before the State of Israel was created. The newly formed country would not have won the War of Independence without trained soldiers – and the soldiers were trained by veterans of Patterson’s Jewish Legion and Jewish Infantry Brigade. Colonel John Patterson had ensured the survival of the Jewish homeland. But his legacy lived on in another way, too. Close friends of his named their child after him, and the boy grew up to be yet another lion-hearted hero of Israel. His name was Yonatan Netanyahu.