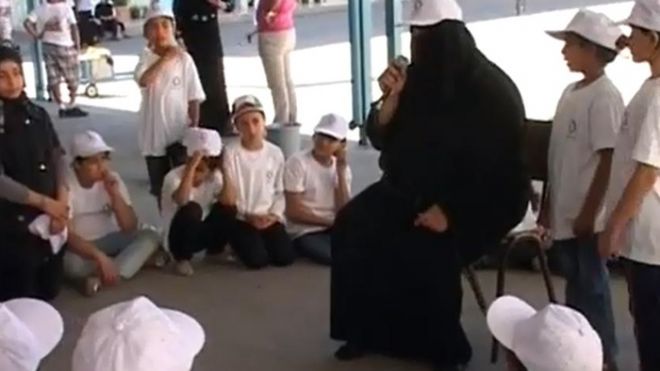 Palestinian children as young as 5 are being taught to hate Jews, glorify martyrs and support jihad, and a U.S.-funded United Nations agency is helping to underwrite the effort, according to a controversial new documentary.

The United Nations Relief and Works Agency hosts summer camps in which Palestinian children are allegedly being indoctrinated, in scenes captured in “Camp Jihad: Inside UNRWA Summer Camp Season 2013.” In addition to learning hateful phrases, the children are taught that Israel belongs to them by birthright, according to the film by the Center for Near East Policy Research.

“They are a gang of Infidels and Christians. They don’t like Allah and do not worship Allah. They hate us.”
– Tayma, young girl speaking at UN-run camp in Gaza

“The children learn the names of many villages – not just the names of big cities like Jerusalem” says Amina Hinawi, identified in the documentary as a UNRWA camp director in Gaza. “This way every child will be motivated to return to their village. UNRWA finances this summer camp. I’m very, very appreciative of UNRWA because the children of Palestine and Gaza need this.”

Indoctrination of young Palestinian children is nothing new, but the documentary has raised the ire of Israelis largely because of the UN role. According to UNRWA’s own website

, the United States is the single-largest contributor to its work and in 2012 gave more than $232 million, ahead of the European Commission ($204 million), and the United Kingdom ($68 million).

Interspersed with sack races, arts and crafts and snack time, are scenes of instructors imparting the message that Israel belongs to Palestinians, and they must take it back by force.

The 19-minute film shows Tayma, a West Bank girl of about 8, being asked who the Jews are.

“They are a gang of Infidels and Christians,” she replies. “They don’t like Allah and do not worship Allah. They hate us.”

Another West Bank camper, Mesam Abu Hindi, has been taught to advocate violence against Israel.

“For those who are older than me, weapons will accelerate the Right of Return,” the girl states.

“When we die as martyrs, we go up to heaven,” says a young girl.

And in one scene, a camp instructor tells children they will help overthrow Israel.

“With God’s help and our own strength, we will wage war,” she says. “And with education and jihad, we will return.”

David Bedein, bureau chief of the Center for Near East Policy Research, said his film crew went into the camps and found that the agency is openly advocating taking up arms against Israel.

“What UNRWA has done is to join in over the last 12 years since the new Palestinian Authority curriculum became as virulent as it is,” Bedein said. “The kids are being trained that what they must do is campaign for the Right of Return – another way of saying ‘destroy Israel.’ A UN agency should not [be supporting a] campaign to wipe out another member state of the UN, putting ideas into the minds of children that they should engage in violence to achieve these goals.”

But UNRWA spokesman Christopher Gunness said hate is not part of the curriculum.

“We teach human rights and conflict resolution and have done so since the 2003 academic year,” Gunness told FoxNews.com. “We are preparing kids in the West Bank and Gaza using Palestinian Authority textbooks which are funded by the U.S., Europe and others, so we are preparing kids for exams. We have internal procedures for reviewing all of the textbooks our teachers use. If anything suspect comes up, it is dealt with.”

However, the film appears to show teachers and counselors at UNRWA schools indoctrinating Palestinian children, and Bedein told FoxNews.com he stands by every frame of his report.

“We went into the UNRWA schools and camps” says Bedein. “There are people who identify themselves very clearly in the film as being teachers, administrators, counselors, and social workers. They all say “We work for UNRWA.””

“This indoctrination [by the Palestinian Authority of its children] is very problematic” Hirschson added.