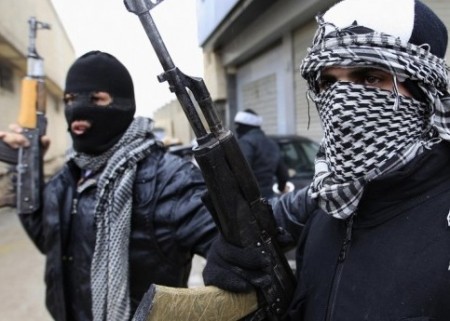 American military intervention in Syria is likely to begin this week, and one thing we know amid the general confusion is that the objective is not to oust Bashar Assad: White House spokesman Jay Carney said Tuesday: “I want to make clear that the options that we are considering are not about regime change. They are about responding to a clear violation of international standard that prohibits the use of chemical weapons.” How the Obama Administration plans to deal with Assad’s alleged use of chemical weapons without challenging his grip on power is unclear, but then again, so is everything else about this misadventure.

Epitomizing the muddle surrounding the likely attack on Syria was former British Prime Minister Tony Blair. In endorsing his country’s likely participation in a strike on Syria, Blair said that it was necessary to prevent the country from becoming a “breeding ground for extremism.”

Blair is several months too late. Syria is already a breeding ground for “extremism.” The New York Times reported no less than four months ago, on April 28, that “nowhere in rebel-controlled Syria is there a secular fighting force to speak of.” And a month ago, Israeli Major General Aviv Kochavi said that Syria now “attracts thousands of global jihad activists and Muslim extremists from the region and around the world, who base themselves in the country, not only to bring down Assad, but to promote the vision of a state based on Islamic law.”

Kochavi added that “before our very eyes, at our doorstep, a large-scale center of the global jihad is developing, which may affect not only Syria and not just the borders of Israel, but Lebanon, Jordan, Sinai, and can radiate onto the entire region.”

And this week, the United States and Great Britain are about to intervene militarily on the same side as those “global jihad activists and Muslim extremists.” They’re poised to do so because they assume that Bashar Assad used chemical weapons against his own people, although there is no proof that it was actually Assad, and not the jihadi rebels we are going to aid, who unleashed the chemical attacks. And UN inspectors in Syria have no mandate to determine exactly who used the chemical weapons, but only the fact that they were used – despite the fact that the key question is who used them, and no one has a clear or definite answer, least of all Barack Obama.

Then again, Barack Obama has aided jihadists and Islamic supremacists before, in Libya and Egypt – and that is exactly what he is about to do again. Bill Roggio reported in the Long War Journal on June 29 that the Al Nusrah Front for the People of the Levant, which is “al Qaeda’s affiliate in Syria,” is “willing to work with Syrian rebel groups such as the Free Syrian Army, and in its official statements has admitted to doing so.” What’s more, “the Al Nusrah Front has also cooperated with Free Syrian Army units to establish sharia, or Islamic law, in Aleppo and in eastern Syria.” Nonetheless, “the US government is backing the Free Syrian Army despite the group’s known ties to the Al Nusrah Front.”

Blair complained that Syria is “mired in carnage between the brutality of Assad and various affiliates of al Qaida.” That is indeed true. But he did not explain how American and British intervention would change that fact, or aid in the establishment of a secular fighting force that after Assad’s fall might establish a secular, pluralistic republic that guaranteed equality of rights for all its citizens.

Given the fact that both the American and the British governments are dedicated to denying the reality of Islamic jihad and ignoring how Islamic jihadis use core texts and teachings of Islam to justify violence and supremacism, it’s extraordinarily unlikely that U.S. or British forces will be able to tell the difference between Sharia supremacists and secularists, or act effectively in favor of the latter, if indeed there are any significant secularist forces left in Syria.

After all, the U.S. and Britain presided over the establishment of Sharia constitutions in Iraq and Afghanistan. Why will Syria be different? Bashar Assad is unquestionably a bloody tyrant; so also are many other rulers around the world whom the U.S. and Britain have not yet determined to dislodge – and a general worldwide War on Tyranny would likely sap the remaining resources of both in short order. But his regime has been far more hospitable to Christians, Alawites (of which he is, of course, one) and other religious minorities in Syria than a Sharia state could or will ever be. Nor is there any reason to think that a Sharia state in Syria, even one established by the United States, will be any more grateful to the United States than are the current regimes in Iraq and Afghanistan.

And finally, there is the possibility of escalation. Syria under Assad is a client state of Iran, which is allied with Russia. Alexander Lukashevich of the Russian foreign ministry said Tuesday that “attempts to bypass the Security Council, once again to create artificial groundless excuses for a military intervention in the region are fraught with new suffering in Syria and catastrophic consequences for other countries of the Middle East and North Africa.” He added: “We are calling on our American partners and all members of the world community to demonstrate prudence (and) strict observance of international law, especially the fundamental principles of the UN Charter.”

But prudence is in short supply in Washington (and London) these days. Russia’s Deputy Prime Minister Dmitry Rogozin had it right when he said that “the West behaves towards the Islamic world like a monkey with a grenade.” The monkey, in the form of U.S. and British forces, is about to throw the grenade into Syria; we can only hope that other forces in the world that are far more powerful and sinister than Bashar Assad will not take advantage of this new depletion of already-depleted U.S. forces to give our tottering economy and weakened military a final push over the edge. But Barack Obama and David Cameron will ultimately discover that they can’t tempt fate forever.