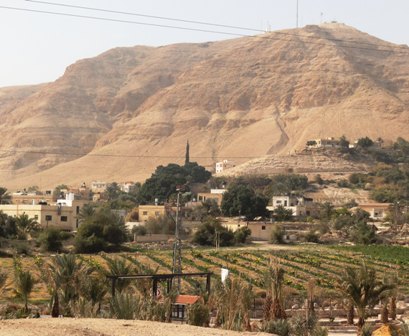 As my Arab driver Faisal from East Jerusalem drove through the entrance to Jericho this past winter, I reminded myself that this oasis was the first city that came under the Palestinian Authority when Israel withdrew its forces pursuant to the Oslo Accords almost 20 years earlier.

Twenty years since the Oslo accord and what had changed?

I looked out of the window on my left side onto the rather impoverished looking Aqabit Jaber refugee camp, where approx. 7-10 thousand Palestinian refugees live. And although I didn’t go into the camp, I know from my visit to other refugee camps nearby in the Bethlehem area, the children are taught to believe in and assert their right of return to the former homes of their grandparents or great grandparents who were displaced in Israel’s 1948 war of independence.

Some 65 years later, not much has changed-rather than being resettled in permanent new homes and moving forward and re-building their lives, the refugees in the Jericho camp remain stuck in a time warp.

On the opposite side of the entrance to Jericho, I could see the five star Intercontinental Hotel, a hotel first built under Yassir Arafat’s newly minted Palestinian Authority, near what was to be a casino that was designed to attract Israeli tourists (since gambling was and is still not legal in Israel). This cash cow would also be a place where Arafat could launder his money, taken from the backs of his people. (In 1999, the casino made a profit of $54 million from the close to 2900 people per day who visited there-99% Israelis. The casino was shut down in 2000 following Arafat’s decision to begin the Second Intifada, as Palestinian terrorists used the casino’s roof top to shoot at Israeli targets.)

And as I passed by the Palestinian Flag at the entrance of Jericho on this beautiful sunny January day, I thought of how this one image of the refugee camp opposite the five star luxury hotel captured so much about contemporary Palestinian society-where poverty is juxtaposed with wealth. In fact, it was inside the Intercontinental Hotel, that the Palestinian man behind the front desk told me that much of the hotel clientele now is from “internal tourism’- from wealthier Palestinians in the West Bank. They come to this lavish resort while a mere stone’s throw away refugees have purposely been kept in camps rather than resettled for political reasons so that they can assert their “right to return” en masse to over-run the State of Israel.

As we drove through Jericho passing the palm, date and banana trees and scenic mountains I began to think that if there ever is peace one day, Jericho, in terms of natural beauty, and sites of archeological, religious and historic interest has tremendous potential. It has so much more in terms of sites of interest than Ramallah, for example, which in my view is far less beautiful. Additionally, Jericho is only a few minutes by car to the Dead Sea.

But alas, the last 20 years of time has passed Jericho by. Whatever great hopes for real economic prosperity and tourism seem to have long faded over the last 20 years-just like the yellowed photo I saw in one the major souvenir shop accross the old city of Jericho of Arafat shaking Rabin’s hand in the presence of Bill Clinton on the White House lawn.

Inside the main circle of the town where locals, not tourists go, near a mosque, I was struck by how many traffic guards/police there were. My driver also no doubt noticed them and didn’t want to stop the car even though I and an American friend would have otherwise stopped and walked around.

I did stop at the site of ancient Jericho, which is believed to be one of, if not the oldest city in the world, called Tel el Sultan. But if truth be known, I didn’t really learn a thing about the layers of the 23 ancient civilizations archeologists have uncovered there because the only tour guide I heard spoke Russian. And also because I was being distracted by a Palestinian man right nearby who was shouting out to us to come try to ride his camel. And also because another one was trying to sell my friend some rather dried out looking dates and was frustrated when she didn’t seem terribly enthused. (At least this time I didn’t get heat stroke as I did three years earlier when I stupidly [and briefly] was in Jericho in the hot August sun).

One other thing I did notice was that under the PA, a cable car was installed that takes visitors up to the Mount of Temptation where a Greek Orthodox Monastery is perched on a cliff. Neither my friend nor I were tempted to take the cable car to get to this place (where Jesus is believed to have stayed after his baptism), but we did notice that a more modern hotel accommodation was being built near the large souvenir shop across from Tel el Sultan.

Just before that Faisal had taken us to another tourist site, Caliph Hisham’ s palace, a 7th century palace during the Muslim Empire which looked like it could be a great place to visit if it weren’t for the fact that it was completely empty, closed, and there was no one around to explain anything about it. It was apparently designed to be a winter resort for the Caliph, but an earthquake (a real one not a political one) destroyed it before the Caliph could use it.

And then, just as we were about to leave Jericho, I came across an unexpected site that interested me most. It appeared to be a very large private home- a manor with a yard that had a gate and walls around it. (These walls of Jericho, unlike the ones in the bible, had definitely not “come tumbling down”.)

There was no other private home nearly as large or stately. Nothing even came close. We looked to see if there was any indication that this was a public PA building, but didn’t see any marking to suggest it was.

I began wondering who in Jericho was this wealthy.

I immediately asked my driver Faisal, “Whose house is this?” (Who is this present day Caliph Hisham?)

“I don’t know”, he said, “It’s probably the house of some Palestinian Authority official.”

Faisal assumed that someone in the Palestinian Authority had gotten very very rich-through corruption.

I do not know whose house this is or if Faisal is correct or not. What’s important is that Faisal assumed this to be the case. And it is consistent with other average Palestinians I have spoken to, all of whom speak of the corruption.

Maybe on another visit to Jericho I will find out who this King of Jericho is. (For now all I know is that the most prominent Palestinian from Jericho is Saeb Erekat, who is the Chief PLO Negotiator in the current round of peace talks. But I have no idea where he lives).

On the way out of Jericho I again passed by the refugee camp across from the luxury hotel. This image of disparity is the legacy of Yassir Arafat, a leader who could have used all of the international aid money to have resettled the refugees, and made Jericho one of the most attractive destinations in “Palestine,” had that been his vision.

Post Script: We also passed by the Jericho Police Training School, which has a Gymnasium and Learning Centre that Canada has funded to the tune of 2.4 million Canadian dollars, as a way of trying to bring security to the West Bank.

However, I am aware of reports by investigative journalist David Bedein and others that suggest that while the PA policemen have cracked down on petty crime, etc., in reality they have not done much when it comes to reigning in Palestinian terrorists. In fact Bedein’s report says that in point of fact Hamas has penetrated into PA security and that “The Israeli army has privately acknowledged that Palestinians involved in attacks on Israelis have been allowed to join PA security forces and receive U.S. training.” http://www.winnipegjewishreview.com/article_detail.cfm?id=3224&sec=3&title=On_the_Brink:_Decline_of_US_trained_Palestinian_Security_Forces _

As soon as Faisal saw we were near the Police Training School, we quickly veered our car in the opposite direction, not wanting to go anyhere near there.