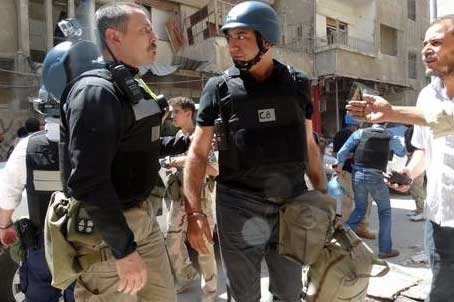 Amman // A senior army officer and chemical-weapons specialist who defected from Bashar Al Assad’s forces says he was ordered by top regime officials to use poison gas in attacks on rebel-held areas.

“I am a witness and received orders three times to use chemical gas last year,” said Brigadier General Zaher Saket, a former commander of chemical warfare in the Syrian army’s 5th division in Sheikh Maskeen, Herak and Busr Al Harir. “But I did not implement the orders.”

Gen Saket, who defected in March this year, said there had been an escalation in the use of chemical warfare against rebels, with poison gases used on fourteen separate occasions while he was serving in the armed forces. He had been informed oftwenty other times after his defection, he said.

He described a chain of command that reached right to the highest level, with Bashar Al Assad issuing orders to the crisis cell – the close-knit group controlling the government’s response to the uprising.

Orders were then passed down to air force security, perhaps the most powerful and the most feared of Syria’s numerous secretive intelligence agencies. From there, the orders were conveyed to the army units tasked with firing chemical munitions.

“The decision requires five hours to be made,” Gen Saket said.

“If the regular army does not have the capacity to storm and destroy the Free Syrian Army, and is not capable of attacking a city or a village, the regime will use chemical weapons,” he said.

While the information could not be independently verified, it corresponds with intelligence estimates made recently by western states in regard to the deadly poison gas attack of August 21 on suburbs of Damascus, which killed hundreds of people.

It also corresponds with testimony by other former and serving army officers, who say the ultra-loyalist air force security plays a central role use of chemical weapons.

The August 21 attack prompted a UN investigation which yesterday confirmed the use of sarin gas, and served as the impetus for a US-Russian plan to decommission Syria’s chemical arsenal by mid-2014.

Unit 450 – whose existence was detailed in a French intelligence report – is one of seven production facilities for nerve gas including sarin, he said.

“We have plenty of the nerve gas: sarin, tabun, VX and mustard gas,” he said.

Sarin, tabun and VX are all deadly nerve agents outlawed under the 1993 chemical weapons convention. Mustard gas, a blistering agent used in World War One, is also regulated under chemical weapons laws.

Three other military units – 416, 417 and 418 – were in charge of protecting, moving and storing poison gases between 32 different sites, according to Gen Saket.

Gen Saket said he received his first order in October, given by a commander he identified as Brigadier General Ali Hassan Ammar, to receive a shipment of poison gas and release it in Sheikh Maskeen, a village in Deraa province.”

“It was planned that I would place the material in a sealed explosive device with TNT and a connection to electrical power…. I did not implement the order,” he said

“I used water instead and created the impression for the officers that I was using it. I dumped the [chemical munitions] substances in a hole,” he said.

The US-Russian decommissioning programme for Syria’s chemical arsenal – thought to be one of the largest in the world – refers to 45 different locations that Moscow and Washington say need to be investigated and dismantled.

Gen Saket doubted the UN-endorsed decommissioning plan would be effective in removing all of the chemical weapons from Mr Al Assad’s forces and his allies, especially the Lebanese militant group Hizbollah.

“Some of the chemical weapons shipments are already with Hizbollah,” he said.