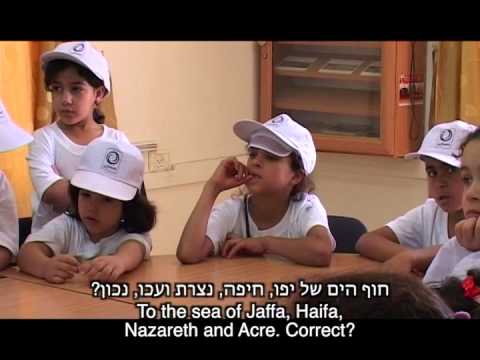 A new film directed by David Bedein, a special correspondent for the Wininpeg Jewish Review shows that Palestinian children in summer camps run by the United Nations Relief and Works Agency (UNRWA) are being taught that “Jews are the wolf,” and that they will one day be able to conquer Israeli cities–Haifa, Jaffa, Akko by force.

Bedein, who has written extensively about UNRWA activities over the last 25 years for the Center For Near East Policy Research and the Israel Resource News Agency in Jerusalem, dispatched a Palestinian crew to cover UNRWA summer camps managed to capture on film how Palestinian children are being indoctrinated for war to liberate all of Palestine.

The message captured on this film of returning to all of Palestine, by force of arms (which includes all of Israel) is consistent with what I have witnessed personally on my visits to Aida and Deheishe refugee camps near Bethlehem, where suicide bombers are revered as role models and the notion of a Palestinian right of return en masse to over-run the State of Israel is promoted.

The short film which is embedded below has been screened in part on Israeli Television as well as Fox News. (It can also be found here at http://israelbehindthenews.com/bin/content.cgi?ID=5666&q=1 )

Entitled “Camp Jihad,” the film was shot on location inside UNRWA summer programs in the Balata refugee camp north of Nablus and in the Gaza Strip. According to campers and staff in the clip, the focus of their camp cirriculum is to educate the young Palestinians about the “Nakba”, the Palestinian term for the consequences of the 1948 war in which Israel won its independence.

In one remarkable scene, a teacher is heard asking the students, “Do you want to return to Jaffa?” They respond enthusiastically, “Yes!” “Haifa?” “Yes!” “Nazareth?” “Yes!”

All these cities are cleary inside sovereign Israel. “Is this not a perscription for war ? The kids are beng trained that what they must do is campaign for the Right of Return-another way of saying ‘Destroy Israel,” Bedein told the Winnipeg Jewish Review in an interview.

The clip also aptures Amina Hinawi, director of the Gaza camp, who explains her educational approach: “We teach the children about the villages they came from…,” she says, “this way, every child will be motivated to return to their original village.”

“We teach the culture of the Nakba to campers,” emphasized Nasrin Bisharat, an UNRWA social worker at the Balata camp, in the report. “That way they know their origins. Even the names of their teams are, for example, Haifa, Acre… We try, on days like Nakba Day, to commemorate the Nakba in the school.”

A speaker wearing a burka in the report tells a circle of young campers, “With God’s help and our own strength we will wage war. And with education and Jihad we will return to our homes!”

Another scene shows a young girl singing to a circle of her clapping friends. “I will not forget my promise to take back my land,” she sings.

“We are filled with rage,” sings an older camper.

The report also shows that many of the children and teachers harp back to the theme of an idyllic Palestinian existence, ( made up of sitting on the beach and sailing in the Mediterranean), until the Jews expelled them.

“Our parents were on the beach,” a teacher in Balata tells the young campers sitting around her during story time. “They sailed ships, they would travel, they had cars, palaces, and villas… Every night they would tell stories.”

Then the teacher promotes the image of Jews as wolves.The Palestinians were having a nice barbecue on the beach when a wolf appeared, she recounts. “Who is the wolf?” the teacher asks. “The Jews! Isn’t it true that the Jews are the wolf?”

“Who expelled us?” she asks the kids, who listen with rapt attention. “The Jews!” they yell energetically.

In sharp contrast with what the report says is happening on the ground, “Neutrality is critically important to United Nations humanitarian agencies,” reads the UNRWA website. “- to gain and maintain the confidence of all needed to operate independently, safely and effectively, especially in politically-charged or conflict situations. Neutrality is also a core obligation and value of UN staff and an important condition for our donors’ continued trust and financial and political support.

“UNRWA’s adherence to UN neutrality is absolutely incompatible with funding or in any way assisting terrorism, terrorists or members of guerrilla-type organisations.”

But UNRWA spokesman Christopher Gunness told FoxNews.com that hate is not part of the curriculum.

“We teach human rights and conflict resolution and have done so since the 2003 academic year,” Gunness told FoxNews.com. “We are preparing kids in the West Bank and Gaza using Palestinian Authority textbooks which are funded by the U.S., Europe and others, so we are preparing kids for exams. We have internal procedures for reviewing all of the textbooks our teachers use. If anything suspect comes up, it is dealt with.”

However, the film appears to show teachers and counselors at UNRWA schools indoctrinating Palestinian children, and Bedein told FoxNews.com he stands by every frame of his report.

“We went into the UNRWA schools and camps” says Bedein. “There are people who identify themselves very clearly in the film as being teachers, administrators, counselors, and social workers. They all say “We work for UNRWA.””

A UN agency should not [be supporting a] campaign to wipe out another member state of the UN, putting ideas into the minds of children that they should engage in violence to achieve these goals.”

The United States was the largest single donor to UNRWA in 2011, according to the organization’s website, with a total contribution of over $239 million, followed by the European Commission’s $175 million. These two sources accounted for about 42 per cent UNRWA’s income for its core program budget. Canada contributes $15 Million a year to UNRWA projects.

* Dangers of Further US Aid to the PLO Army

* Threat of Planned PLO Army Deployment in Hebron and Jerusalem

* UNRWA and PA for War Curriculum, financed by US and the West

* Conflicts of Interests of Israeli businesses invested in the Palestinian Authority