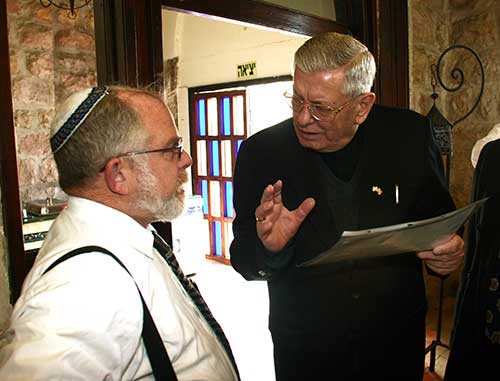 This past Monday, Israeli Intelligence Affairs Minister Dr. Yuval Steinitz and the Director General of his ministry, Brig.-Gen. (ret.) Yossi Kuperwasser held an unprecedented press conference on Monday in which they denounced the Palestinian Authority school system and shared evidence with the media that Adolf Hitler now plays a central figure as a role model in PA schools.

From the very genesis of the PA school curriculum, in 2000, the new schools of the PA, many of which are located in facilities run by UNRWA, the United Nations Relief and Works Agency, and funded by more than 40 donor nations, adopted a policy of teaching the next generation to venerate the ‘right of return’ to Palestine, all of Palestine, by means of holy war, martyrdom and education.

The PA rejected other curricula prepared by Ber Zeit University, a Palestinian academic facility located near Ramallah, which emphasized reconciliation and peace.

On March 1, 2000, Shimon Peres, then the Israel Minister of Regional Development, addressed the international colloquium of the Jewish media, where Peres lavished praise on the new Palestinian school curriculum for peace.

Dr. Abu Hummus asked that we give publicity to the new school books, which we readily agreed to do. Returning to Jerusalem, giving a cursory review of the school books, our Arabic language journalist colleagues noted that the new PA school books were problematic.

I brought a set of the books to the Dr. Shlomo Ben Ami, then the Israel Minister of Foreign Affairs and showed him the books, where he could see that the new maps produced by the nascent Palestinian Authority deleted Israel for every PA school child to see that only Palestine existed between the Mediterranean Sea and the Jordan River.

Ben Ami looked at the new PA school books as if I had brought him the Manhattan telephone book for his perusal.

As I left the minister’s his office, Archbishop Pietro Sambi, the Pope’s “ambassador to the Holy Land,” called my cell phone with a request: Could I bring the PA school books to him immediately. – “the Pope wants to see them”. The honorary chairman of the ADL in Israel, the late Jack Padwa, had informed the Archbishop that our agency had purchased these books.

Together with Padwa, I traveled to the Archbishop’s office on the Mount of Olives and delivered the books to the Archbishop – the set that the Israel Minister of Foreign Affairs did not want to look at.

The Vatican’s ambassador assured us that the Pope would commission the first translation of the new Palestinian Schoolbooks, which he did.

Archbishop Sambi brought the books with him to Rome, and initiated a study of the PA textbooks, which the Vatican determined to be anti-semitic and pro-war in nature.

One month later, at the recommendation of the Pope and with the encouragement of Archbishop Sambi, the Italian government announced that it would pull its money out of the Palestinian Ministry of Education’s PA text book project.

Here are some pearls of wisdom that Palestinian children learned from the new PA school books of the Palestinian Authority, which were introduced between 2000 and 2006, and which have been used ever since.

1. Israel does not appear on any maps of the world in the new PA textbooks, while maps of Israel replace the name Israel with Palestine in all of the new Palestinian Authority school books.

3. The new Palestinian school books mention Israel only as an enemy, in reference to “occupation of lands” in 1948 and 1967:

“There is no doubt that the Israeli occupation has a negative impact on [Palestinian] agriculture and its export,” (p. (Lughatuna al-Jamila (Our Beautiful Language) Vol. 1, 10th grade textbook, p. 102).

4. The new Palestinian school books present Zionism only as an enemy movement:

Accusation against settlements [from 1948!] of damaging water sources “the influence of settlement on sources of water in Palestine,” (p. 9) (Ulum al-Sihha wal-B’ia (Health and Environmental Sciences), 10th grade textbook, p. 122).

“The Palestinian family has problems…stemming from the occupation…it loses father, mother or son to death or imprisonment…endures the difficulties of life…,” (p. 11) (Al-Tarbiyah al-Wataniyya (National Education), 5th grade textbook, p. 23).

6. The new Palestinian School books teach that the only ancient inhabitants of Israel were Arabs, ignoring any ancient Jewish presence.

“Concentrated…in the land of Al-Sham [Greater Syria]…was the culture of the Canaanite and Aramaic peoples who migrated there from the Arab peninsula,” (p.14-15) (Tarikh al-Hadarat al-Qadima (History of Ancient Civilizations), 5th grade textbook, Foreword).

7. The new Palestinian school books teach that Palestinians must use war and violence – especially martyrdom – to accomplish their goals:

The warrior goes to war faced with one of the good options: victory or martyrdom in battle for the sake of Allah. (Ibid. Vol. 1, 5th grade textbook, p. 70).

“Allah gave the people of this land (Al-Sham and Palestine) an important task: they must stand on the forefront of the Muslim campaign against their enemies, and only if they fulfill their duty to their religion, nation, and land will they be rewarded as stated in the scriptures.” (Al-Tarbiya al-Islamiyyah (Islamic Education), Vol 2, 10th grade textbook, p. 50).

Since Shimon Peres, now the President of Israel, constantly attests to the moderate and peaceful intentions of Machmud Abbas, the head of the Palestinian Authority, our agency has been submitting a request to Peres for a response to Abbas’s new educational system for the last six years. We have spoken to all of Peres’s spokespeople and to Peres’s advisers. Yet the response from Peres’s office is consistent refusal to respond.

At the press conference conducted on Monday, Israeli government education experts described Abbas’s school system as “war curriculum”, and stressed that Abbas’s schools were inculcating Palestinian youth with the idea that Hitler is a role model for every Palestinian child to emulate.

Our agency asked the spokesman of Shimon Peres for comment. After all, Peres convened a special briefing for visiting US Senators during the first weekend of 2014 to say that he had “full confidence” in Abbas as a peace partner.

Yet that same Machmud Abbas, who personally oversees the PA school curriculum of war.

The response from the office of the President of Israel: No comment.

However, the government of Israel finally heeded the initial warnings of the Vatican that the new Palestinian Authority school books are war-like in nature.
Archbishop Sambi, who died in July, 2011, while he was the Papal Nuncio in Washington, DC, would have been proud. In my last conversation with Archbishop Sambi, shortly before his death, he asked if the Israeli government would ever make an official comment on the Palestinian school curricula. Now they have.

It took 13 years for the Israeli government to denounce the official curriculum of the Palestinian Authority, but now the Jewish state has done so, on the record.