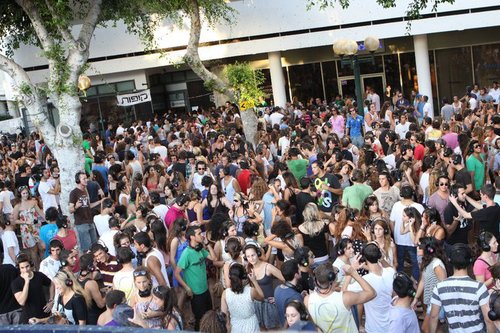 People who predict population trends need to learn from weather forecasters: when your forecasts are wrong more than right, go home before they lock you at home.â€Ž

Many who yell “demography” when discussing Israel’s future, pretend to have the facts on their side. Actually, they do not have a clue. Some politicians and think tanks claim to have examined “demography,” the study of population, but, actually, they practice “demagoguery,” the art of swaying populations and gaining popularity.

“Iâ€Žn a hundred years the Jewish population of Palestine will reach one hundred thousand men,” the Jewish historian Simon Dubnov predicted in a critical letter he wrote to Zionist leaders in 1898. Dubnov’s estimate was only off by a ratio of 50 to 1.

This is THE classic example of a wild population prediction about â€ŽIsrael. Had Zionist leaders accepted Dubnov’s dire demographic view, they might have aborted a modern state of Israel before it was born. But 50 years later, Israelwas born, and it has survived and thrived, despite incorrect population predictions.â€Ž

Nearly 120 years and six million Jews later, one hears the echoes of Dubnov’s gross “demography” in the demagoguery of the oft-made, off-base claims that â€ŽIsrael is becoming a minority Jewish community, or that Israel is becoming – God forbid – a Jewish version of South Africa, a state that practices official racism.

These claims are demagoguery in many ways: â€ŽIsrael was the first Middle East state to grant Arabs full civil rights, including the right to vote – women as well as men. Even Arabs under Israeli military rule – again women and men – gained voting rights in West Bank elections in 1972 and 1976.

Warning Israel will become a minority state is demagoguery because a century of Jewish settlement in the land of Abraham proves many dire demographic assumptions were not worth the paper on which they were written, whether they were produced in the Israeli Labor Party, the U.S. Department of State, or the European Union.â€Ž

Real demography, which I studied in the context of geography at â€ŽColumbia University many years ago, is summed up by the letters CRI – the combined rate of increase – which is a function of births, deaths, in-migration, and out-migration.

We cannot know for sure, of course, when or how many people will live, die, move-in, or move-out. We have past records, and they form trends or patterns, allowing us to build a model that “predicts” future trends. This is legitimate. It is like extrapolating in trigonometry – building on the current angle to discern a pattern.

What is NOT legitimate is interpolation – inserting extraneous data or politically-motivated suppositions and building grave predictions on them. Both the United Nations and the Palestinian Authority do this, and too many Israelis and Western agencies rely on the UN and the PA for demographic data.â€Ž

Phony figures from the United Nations Relief and Works Agency (UNRWA) – where deaths are ignored and other facts are created – cannot change the real picture. UNRWA handles Palestinian “refugees” (66 years after the war in which they became refugees) and has a vested interest in inflating figures and keeping itself alive.

Both UNRWA and the PA count people who are dead as if they were alive. They count Arabs in â€ŽJerusalem twice – as Jerusalemite and as West Bankers. This distorts statistics in a demagogic debate, but it cannot change facts in real demographic study.

From 1898 to today, the history of population growth and decline in â€ŽIsrael is written as much by migration as by births and deaths. Arabs migrated out more than Jews did, and high Arab birth rates fell faster than predicted. Meanwhile Jewish birth rates rose, reinforced by in-migrations, at rates higher than expected. This should not surprise us.

People are not just numbers, and Jews take particular delight in defying statistics.â€Ž

A big difference between life and trigonometry is that numbers and angles are not really alive. Numbers do not die. However, people breathe and have free will. People change their minds. They move to a place, and then they move on. They go to war or flee from war. They live, die and move in ways that angles and numbers do not.â€Ž

Throughout the 20th â€Žcentury and now into the millennium, there have been politicians and scholars who claimed that the Jewish population in Israel was about to be swallowed up by the Arab population. They were wrong, including a few Israeli cabinet ministers, some U.S. presidents, and a few terrorists.

“The Arab woman is a demographic bomb,” declared Yasser Arafat, a man who knew more about bombs and demagoguery than demography. When the flow of Russian Jews to â€ŽIsrael outpaced the wave of Arab males going to live in Iraq and Kuwait, Arafat started to cry into his hummus. Arafat was not alone in his errors.â€Ž

European officials, in particular, have trouble distinguishing numbers and people, and it is both sad and funny to watch Europeans lecturing Israelis about demography. Many major cities in Europe are becoming Muslim-dominated. “Muhammad” has been the most popular name for boys born in Belgium, seat of the EU, for years.

The police in â€ŽFrance stay away from more than 700 “no-entry zones” where Muslim populations call the tune, but EU officials like Catherine Ashton lecture Israeli leaders about demographic dangers.

In fact, as Asia Times columnist “Spengler” (David Goldman) has shown many times, Israel is the only Western country with a positive demographic record because Israelis like children and like having children. Europeans like cats and dogs.â€Ž

â€ŽEurope got into this rut after World War II. Unlike America, which had a baby boom to make up for lost soldiers,Europe, which lost even more soldiers, started “guest worker” programs, inviting Pakistanis, Turks, Moroccans, and Algerians to do the work. These workers did not just visit, but started having big families.

The Europeans once loved guest workers, but today, â€ŽGermany, England, France, and Belgium have stopped loving multi-culturalism and would love Israeli birth rates.

Europe has a big demographic problem, but it also has a demagogic problem: it likes to pretend that â€ŽIsrael has a problem.

Meanwhile, Jewish historians and demographers who studied European models were often as off in their predictions as inept weathermen or European politicians.â€Ž

Roberto Bachi, Sergio De La Pergola, Arnon Sopher – good scholars all – made dire predictions in 1947, 1967, 1980, 2000, etc. about the imminent collapse of the Jewish majority in the â€Žland of Israel. They were wrong each time, and they are still wrong.

Part of the problem is that they sometimes relied on data from Arabs (the Palestinian Authority) or the UN, an organization with a decidedly pro-Arab tilt.

Another difference between “European models” and “Third World models” is that broad population migrations are not unusual in places like Africa, and in many respects Israel has a combination of “European” and “Third World” attributes. Migration has been a major factor in Israel beyond what the demographers expected.

The other difference is that Jews are qualitatively different from other peoples because their heritage is the Bible, whose first commandment is “be fruitful and multiply.” Religious Jews take this more seriously than others, but even secular Israeli Jews have more children than Europeans or Americans.â€Ž

The Hebrew Bible talks of demography many times. It records population censuses that not merely recorded numbers but also family lines. This way of “counting” shows the Jewish view that people are not just numbers – that quality is as important as quantity.â€Ž

After the murder of 6,000,000 Jews in the Holocaust, many Jews swore they would have their revenge on Hilter and the Nazis by having a lot of kids. Intermarriage has cut into this, but at least in â€ŽIsrael, Jews are multiplying.

From 1967 until today, from the â€ŽJordan to the Mediterranean, the rough balance has been two Jews for each Arab. This happened because Israeli Jews decided to have more children, because many Jews around the world sawIsrael as an important part, if not the center, of their universe, while Palestinian Arabs did not.

These patterns of Jewish population rise and slow Arab decline have been verified by a series of studies at The American Enterprise Institute (AEI). They predict a strong Jewish majority between the Jordan and the Mediterraneanin 20 years time.

Of course, it is a prediction, and predictions can be wrong, but if you try to fulfill a prediction, then it has a better chance of realization. As Herzl once saidâ€Ž -â€Ž“im tirtzu ein zu agada” – if you want it, then it will not be a mere legend or dream.

That is Zionist demography, not anti-Zionist demagoguery.

Dr. Michael Widlanski teaches at Bar Ilan University and is Schusterman Visiting professor at UC Irvine for 2013-14. An expert on Arab politics and communications, he is the author of Battle for Our Minds: Western Elites and the Terror Threat  published by Simon and Schuster. A former reporter, correspondent and editor respectively at The New York Times, Cox Newspapers, and The Jerusalem Post, Dr. Widlanski served as Strategic Affairs Advisor in Israel’s Ministry of Public Security.