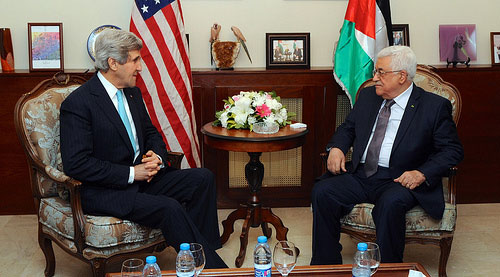 The communiqué issued by Arab heads of state at the end of their summit in Kuwait this week shows that the Arab countries do not hold the Obama Administration in high regard or even take it seriously.

The Arab leaders also proved once again that they do not care much about their own people, including the Palestinians.

The Arab leaders, at the end of their two-day meeting, announced their “total rejection of the call to consider Israel a Jewish state.”

This announcement came despite pressure from the Obama Administration on the Arab leaders to refrain from rejecting the demand.

A top Arab diplomat was quoted as saying that U.S. Secretary of State John Kerry contacted Arab leaders on the eve of their 25th summit in Kuwait to “warn” them against rejecting Israel as a Jewish state.

Kerry, according to the diplomat, asked the Arab leaders completely to ignore the issue of Israel’s Jewishness and not to make any positive or negative reference to it in their final statement.

Kerry did not want the Arab heads of state to repeat the same “mistake” that the Arab League foreign ministers made on March 9, when they too issued a statement declaring their refusal to recognize Israel as a Jewish state.

The Arab summit’s statement was published shortly before Kerry cut short a European tour to hold an emergency meeting with Abbas in Amman in a last-minute effort to salvage the peace process with Israel.

In light of the Arab summit’s announcement, all that is left for Kerry to do is to put heavy pressure on Abbas to agree to the extension of the peace talks after the April 29 deadline set by the U.S. Administration.

At the meeting in Amman, Kerry warned Abbas that failure to comply with his demand would result in U.S. sanctions against the PA, including suspending financial aid and closing the PLO diplomatic mission in Washington.

Emboldened by the Arab leaders’ backing, however, Abbas does not seem to take Kerry’s threats seriously, particularly in light of previous threats by the U.S. Administration that were never carried out.

In 2012, Abbas had also ignored U.S. threats and pressure by seeking UN recognition of a Palestinian state. The Obama Administration did not take any retaliatory measures against the PA or against Abbas himself.

Like most of the Arab leaders, Abbas apparently understands that the Obama Administration has been weakened to a point where it is no longer able to impose its will on any Arab leader.

The way things appear now, it is Abbas who is setting new conditions and coming up with new demands, evidently from a conviction that the Obama Administration has no choice but to succumb.

Abbas today seems to feel confident enough to set his own conditions for accepting Kerry’s demand to extend the peace talks.

The Palestinians also continue to accuse the Obama Administration of exerting heavy pressure on Abbas to soften his position and accept some of Israel’s demands, including the issue of Israel’s Jewishness. Some senior Palestinian officials in Ramallah have even accused Obama and Kerry of practicing “political and financial blackmail” against Abbas.

Abbas seems assured that Obama and Kerry are so desperate to avoid a collapse of the peace talks that they will be willing to accept anything he or the Arab leaders ask for.

The Arab summit stance on the issue of recognizing Israel as a Jewish state is a blow to the Obama Administration’s efforts to achieve a peace agreement between the Palestinian Authority and Israel.

Abbas might eventually agree to the American demand to extend the peace talks at least until the end of the year. But this does not mean that he is going to change his position regarding recognition of Israel as a Jewish state. Nor does it mean that Abbas is about to make real concessions on any of the core issues, such as the future of Jerusalem or the issue of borders.

The extension of the talks means only one thing: that Abbas will be able to use the new time given to him to try to extract further concessions and gestures from the U.S. and Israel, while all the time bearing in mind that Obama and Kerry are willing to do almost anything to avoid a situation where they are forced to admit that their efforts and initiatives in the Middle East have failed.