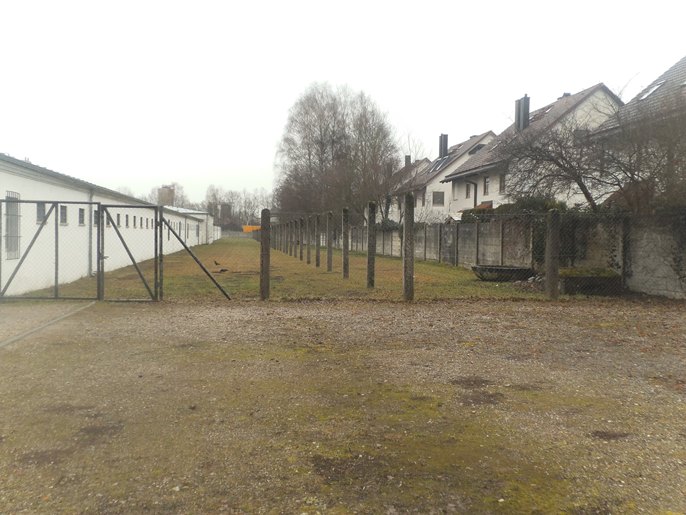 There is a row of homeowners whose back yards face what was a torture barack in Dachau Concentration camp. Their backyard fence is actually the fence from the concentration camp, with one of the Watchtowers from the camp right nearby.

I had not expected to see this when I visited the Dachau Concentration Camp memorial and was rather stunned. Who would want to live there and raise children looking right into the camp from their second floor windows? I thought to myself that surely there is enough land in Germany not to have to build a row of houses as part of a suburban neighborhood backing onto the concentration camp.

As one blogger Philip Greenspun has written, “If you’re so inclined, it is possible to live in a brand-new condo built just a few meters from the walls and barbed wire of the Dachau Concentration Camp. The camp would literally be your back yard. You could tell visitors “Keep an eye on the enormously tall sign for the McDonald’s restaurant. Turn left at the Arbeit Macht Frei gate. If you come to the Krematorium or the blood trench where the Soviet POW’s were shot, you’ve gone too far.
http://philip.greenspun.com/bp/dachau.html After leaving the camp I asked a German born guide from Radius tours at the Dachau train station in the town of Dachau about these houses. He explained that the houses were build there in “the eighties.”

He also said that after World War II, Dachau’s concentration camp was used as a refugee camp for ethnic Germans who had been expelled from the Sudetenland (in what is now the Czech Republic). The expellees from Czechoslovakia had come to Dachau because they had no place else to go, since there was a shortage of housing in Germany after the war. The camp was upgraded somewhat and the refugees lived there.

As of 1965 when the Dachau camp was made into a memorial site, the refugees could no longer live there, but since many of them had lived there for a long time already, they wanted to resettle nearby.

“Since they lived there for years, I guess they were used to seeing the camp, so I guess they weren’t bothered by buying homes that look right onto the camp,” the guide shrugged, noting I was not the first person to raise the issue.

I asked if the housing was priced lower so people would live there. According to a 2003 article by the Jewish Telegraphic Agency, the houses close to the camp may actually be considered prime real estate.

“In an ironic twist, homes located near the former Nazi concentration camp now are considered prime residential real estate because they are adjacent to the camp’s quiet, green grounds, Holocaust survivor Max Mannheimer told the visiting journalists.” (Editor’s note: the small patch of greenery is a very miniscule part of the otherwise bleak and gray camp)

The German guide I spoke with added, “What I can tell you is that the Mayor of Dachau (the nearby town) wanted the whole camp bulldozed down. He didn’t want the town to be associated with the camp.”

As the guide explained, for decades after the Holocaust, local and regional officials tried to make the former Dachau camp difficult to find. For instance, in 1955 Dachau district’s representative in the Bavarian parliament tried to have the crematorium torn down in order to discourage visitors. When his initiative failed, he had all directional signs to the former camp removed.

Visitors in the 1950’s and 60’s often reported that they received evasive answers when they asked for directions to the former Dachau camp.

From the 1950’s to the 1990’s the single bus line traversing the three kilometers between Dachau’s train station and the camp made only nine round trips between 9 am and 5 pm, with gaps of more than an hour during the peak midday period. Now they arrive about every 20-25 minutes.

In August 2013, German Chancellor Angela Merkel became the first sitting German head of state to visit the concentration camp memorial at Dachau some 47 years after it the site became a memorial. Merkel was accompanied on her visit to Dachau by 93-year-old Max Mannheimer, one of the survivors of the camp and the president of the committee of former prisoners. A media report notes that Mannheimer had “long lobbied for the Chancellor to visit the camp [emphasis added.” http://www.dw.de/merkel-visit-to-nazi-concentration-camp-dachau-angers-critics/a-17035319. Süddeutsche Zeitung noted that leaders commonly paid tribute to Nazi victims abroad but rarely within Germany, and Merkal received criticism for visiting the camp “on the sidelines of a campaign appearance in a beer tent at the Dachau funfair.”

Merkal’s political mentor, the former Chancellor Helmut Kohl, did not visit the memorial when he addressed the 1990 town festival, held in a large beer tent.

I rode the train from the Dachau station back to Munich in silence, got back to the Torbrau Hotel and collapsed.