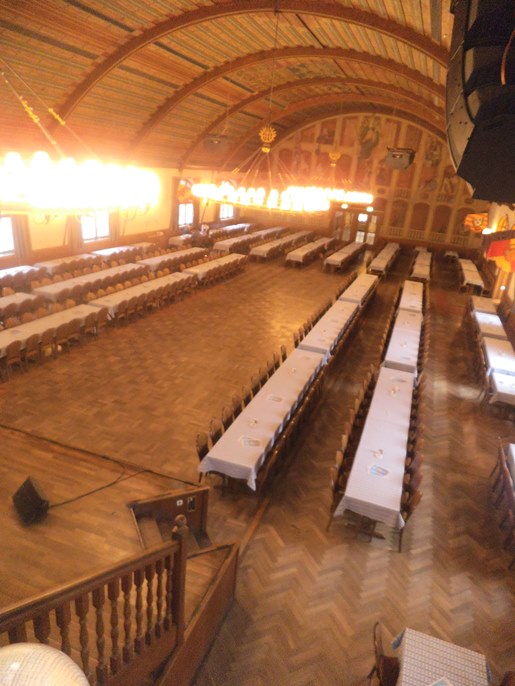 I had already been in Munich for two days before I ventured into the Hofbrehaus, reportedly the most famous beer hall in the world and considered one of Munich’s best tourist attractions. It was located right behind my room at the Hotel Torbrau, a hotel where Hitler had founded the SS in the hotel basement.

Inside the Hofbrauhaus there was a live band playing jovial Bavarian music, and the long massive wooden tables were filled with people. From the scene inside, you wouldn’t know just how central Hofbrauhaus was to Hitler’s rise to power. For it was here that he founded the fledgling Nazi party in 1921.

I gazed at the ceiling of the main floor of the giant Hofbrauhaus and looked up above each lamp. In the Nazi period the Bavarian flag was seen in the form of a swastika, painted on by Hitler’s supporters. According to one website, after the war the owners of the Hofbrauhaus found that they couldn’t paint over the swastikas as they were still visible after several coats of paint. Accordingly, they decided to decorate them as oddly shaped Bavarian flags and then it appears they were altered again to make it harder to see the Nazi Swastika.

http://www.tracesofevil.com/2008/01/munich-hofbrauhaus.html. But if you look at the Bavarian flags carefully you can still see that at one point they were swastikas (see my second photo). Hitler, who had dreamed of being an artist, had in fact sketched the Hofbrehaus, which was built in 1589 by a Bavarian Duke in order to reduce his expenditures on providing beer to his royal household as well as guarantee its quality.

Hitler wanted to be an artist and applied to the prestigious Vienna Academy of Fine Arts at the age of 18. But his application was rejected, as he was told that he couldn’t draw humans well enough. He was told, however, that he had some ability for the field of architecture, but that required a high school diploma, and Hitler had flunked out of high school.

In 1919, as a defeated and humiliated Germany emerged from World War I, people flocked to beer halls to forget their problems. Inflation was rampant–the German mark devalued so much that children played with it as toys. It was at the Hofbrauhaus that the future Nazi Party held its first mass meeting with an audience of 70 people who came to drink and listen to Hitler. Just over one year later Hitler’s impassioned oratory skills drew 2000 people in attendance as he presented the Nazi party’s program from the roster of the second floor of the Hobrauhaus.

At the gift shop on the main floor of the Hofbrauhaus I bought a book entitled “The Munich Hofbrauhaus-The Place, The Beer, and Other Articles of Faith” and was intrigued by how it described events:

…on February 25, 1920 Hitler presented the Nazi Party Twenty Five Point Program in the Hofbrauhaus; nobody had any foreboding of the full extent of the disaster Hitler would bring down on Germany and large parts of the world (emphasis added). The book arguably painted Germany as the primary victim of Hitler, and large parts of the world as the secondary victim. There’s no mention of Jews at all being victims.

The 123 page book also doesn’t mention that at the Hofbrauhaus that on Friday August 13, 1920 only a half a year after presenting the Twenty Five Point Program Hitler publicly denounced the Jews for the first time and demanded their removal from Germany in his “Why We Are Antisemites Speech.”

Nor does the book mention how attached Hitler was to the Hofbrauhaus. As he wrote at the beginning of Chapter IV (The First Period of Our Struggle) in Mein Kampf:

“During that period the hall of the Hofbrau Haus in Munich acquired for us, National Socialists, a sort of mystic significance (emphasis added). Every week there was a meeting in that hall, and each time the hall was better filled than on the former occasion, and the public more attentive.”

The book also fails to mention that on November 4, 1921 the Hofbrauhaus was also the birthplace of the later feared Nazi street fighting organization, the Sturmabteilungen or SA for short. On that day the National Socialist party held a large public meeting at the Hofbrauhaus and after Hitler had spoken for some time the meeting erupted into a melee. There was a massive fight between the Nazi brawlers and their opponents (the Social Democrats – and Communists ). Hitler managed to finish his address, notwithstanding the chaos of smashed tables and chairs and hurled beer mugs all about him.

The book I bought does say that:

“Between 1933 and the beginning of the Second World War in 1939 Hitler and his followers also celebrated the day of the Nazi Party’s founding every year at the Hofbrauhaus. Since Hitler only drank mineral water and was afraid of being poisoned, Hans Bacherl, Hofbrauhaus’s landlord at the time, had to fetch the water from the cellar personally, closely guarded by an SS officer.”

One writer in the Washington Post has written that some of the first violent attacks on Jews took place at the Hofbrehaus, The book I bought ends this chapter by saying that with the outbreak of World War II the Hofbrauhaus “faced some hard times” (as I read it I thought to myself– not as hard as the Jews faced). The book continues that “these reached their sad climax during the night of 24-25 April 1944.” On that night three direct hits by allied bombers almost completely destroyed the building. It would be rebuilt.

After the war, the Hofbrauhaus could only serve “thin beer” and this only when the customer presented a food stamp.

I walked slowly around the huge second floor of the Hofbrauhaus which was empty as it was the middle of the day. The tables and chairs and setting look awfully similar to the way they looked in Hitler’s time. It was a jarring experience.

I left the Hofbrauhaus without ordering a beer.