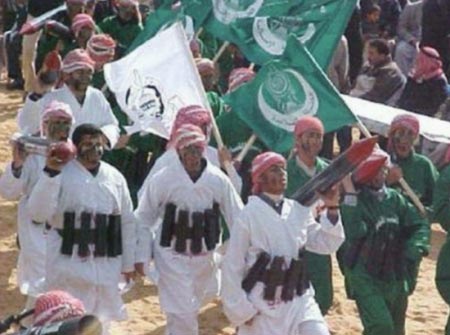 Following our center’s March 13 presentation at the British Parliament concerning the indiscretions of United Nations Relief and Works Agency (UNRWA) education, Sir Peter Luff, MP for Mid Worcestershire, requested concrete evidence that would support the findings of the center that UNRWA is preparing its students for war.

In response to MP Luff’s request, the Center for Near East Policy Research commissioned Dr. Arnon Groiss, who holds a Ph.D. in Islamic Studies from Princeton University and who has worked with the Arabic Language Service of the Voice of Israel Radio for the past 40 years, to prepare documentation as to how the values of armed struggle, jihad and martyrdom are taught in schools operated by UNRWA in the West Bank, Jerusalem and Gaza.

Below are the findings from Dr. Groiss’s report:

Palestinian Authority (PA) schoolbooks used by UNRWA in its schools in the West Bank and the Gaza Strip promote the goal of a violent struggle for the liberation of Palestine. That struggle, which is never restricted to the territories of the West Bank and the Gaza Strip alone, is made more compelling in the books with the help of the traditional Islamic ideals of jihad and martyrdom (Shahadah), aided by the description of the violent return of the refugees. Thus, the Palestinian child in UNRWA schools is exposed to an atmosphere of violence and is mentally prepared for his or her actual participation in that armed struggle in the future.

The following examples taken from recently published PA schoolbooks that have been in use in UNRWA schools during the current school year (2013/14) clearly attest to this phenomenon. One can find the spiritual foundation of the behavior expected from prospective martyrs in the following text, which appeared in an Islamic Education textbook for grade 6:

“Jihad in the cause of God for raising the flag of Islam and preventing oppression and corruption on earth:… When a Muslim man believes that God is the one who gives life and death, gain and loss, and that victory and power are in His hand, he then liberates himself from others’ control, and bravery and a desire to seek martyrdom in God’s cause are enlivened within his soul.”

A comment in another Islamic Education textbook gives this general notion a dimension of certain urgency:

“We, Muslims, dearly need these days to approach Sublime God so that He would grant us power and victory!”

O brother, the oppressors have exceededed all bounds and Jihad and sacrifice are necessary

Would we let them rob Arabdom of the ancestors’ glory and power?
…

So, draw your sword from its sheath, for it should be sheathed no more

O brother, O proud Arab, I see that our date is today, not tomorrow

O brother, we have a sister in Jerusalem to whom the slaughterers have prepared the knives

O brother, rise towards the prayer-direction [Qiblah] of East and West and let us defend the Church [of the Holy Sepulcher] and the [Al-Aqsa] Mosque

O brother, if on her soil my blood flows and the hand closes on its pebbles

O Palestine, the youth will redeem your sanctuary; may both the sacrificing person [fidai] and the redeemed one be exalted!

O Palestine, our chests will defend you; [It is] either life or destruction!

Verses taken from this poem serve in language exercises:

“O brother, the oppressors have exceeded all bounds and Jihad and sacrifice are necessary

O brother, we have a sister in Jerusalem to whom the slaughterers have prepared the knives.”

In the following poem one can find an explicit call for martyrdom: “By your life, this is men’s death and whoever wishes a noble death – here it is.”

For [I will have] either a life that gladdens [my] friends or a death that irritates [my] enemies
…
By your life! I see my death but I hasten [my] steps toward it

By your life! This is men’s death and whoever wishes a noble death – here it is!”

A language exercise featuring a verse from this poem:

“By your life! I see my death but I hasten [my] steps toward it

I regard my death for my stolen right and for my country as a desired one.”

“When, among the rest of this world’s mothers, Palestinian mothers alone continue for the sixth decade in a row to bury their children with trilling cries of joy!

When Palestinian fathers continue to commit their sons to the earth calmly and promise to keep doing so with the rest [of their sons]!

When the Palestinian [person] of whatever age, religion, gender and affiliation becomes a martyr project!…”

“Good Morning, O My Homeland [By] Lutfi Zaghlul [Excerpts]
…
Good morning, O my Homeland
…
A morning of glory and red liberty watered by the martyrs’ blood”

An exercise related to this poem is the following:

“I will connect the poetic verses with the feelings they express in the following [cases]:
…
A morning of glory and red liberty watered by the martyrs’ blood… –
The hope for the liberation of Palestine.”

The issue of the claimed “Right of Return” of Palestinian refugees and their descendants to their previous homes inside today’s Israel is also described as part of the violent struggle for liberation. Examples:

“We Shall Return [By] Abu Salma [Excerpts]

Beloved Palestine, how could I live far away from your plains and heights
…

We shall return with the thundering storms, with the sacred lightening and the shooting star

With the winged hope and the songs, with the soaring vulture and the eagle

Yes! Thousands of victims shall return; victims of oppression shall open every door”

“We Are Returning [By] Harun Hashem Rashid

Returning, Returning; we are returning

Returning to the homes, to the plains, to the mountains

Under the flags of glory, Jihad and struggle

In blood, sacrifice, fraternity and loyalty

To Jihad on the highlands, to the harvest in the land

A language exercise featuring a verse taken from this poem:

“Returning, Returning; we are returning

Cry out, O those who have left: We are returning.”

There are other examples repeating the same motifs. The following one likens martyrdom to a wedding party:

I shall not cry in this wedding party

For our Arabness refuses that we cry over the martyrs”

“The martyr’s blood [watered] the ground.”

“If I fall take my place, O my comrade-in-arms

Carry your [my?] weapon and do not let my blood that flows from the weapon frighten you…”

The following is an assignment for seventh graders:

“I will write up to ten lines about one of the martyrs whom I know, being assisted by the following elements: his name and place of birth, his life and achievements, the circumstances of his martyrdom, society’s attitude to his family after his martyrdom, the martyr’s rank in Islam.”

The enemy is defeated.”

“The army defeated the enemy.”

A story titled “An Evening Visitor” tells of a Palestinian father who lost his son in the 1967 war and later joined one of the Palestinian armed organizations and became a Fidai – a title given to members of such organizations. The story presents their raids against Israel from southern Lebanon in a favorable light and thus makes of them role models for the young children. Excerpts:

“Everyone knows that I have been in the South [authors’ note: South: South Lebanon] for ten years. I have left the city [Amman] and the family to join the fighters…

We in the South face death any minute… Youths like Saleh [his killed son] fall every day on the South’s land. We bury them and bury our grief with them…”

The foregoing does not cover the whole picture of preparing Palestinian schoolchildren for jihad and martyrdom. One could add the Palestinian national anthem itself, here cited to first graders, including the following verse: “…I shall live as a Fidai and continue as a Fidai and die as a Fidai…”

See the whole page in full, with an illustration of a teacher saying: “let us repeat the national anthem:” (the extracted verse is the fourth one).

A language exercise demonizing Israel, in which the Palestinian child is likened to a soldier, could be added as well to this literary genre:

“The Palestinian child stood facing the enemy’s bullets like a brave soldier.”

Recently introduced National Education textbooks for grades 8 and 9 in Hamas-controlled Gaza feature far more explicit pieces encouraging children to engage in acts of war. One example out of several:

From the above-given quotations taken from PA schoolbooks in current use by UNRWA, one could easily have a solid idea about the war education hundreds of thousands of Palestinian schoolchildren get, apart from other alarming aspects of anti-Israeli and anti-Jewish indoctrination that is antithetical to any chance of peace in the Middle East. That kind of “education” should cease immediately and it is the responsibility of UNRWA’s democratic donor states to guarantee that.

Dr. Arnon Groiss is an Arabic-language journalist who has been working for the Voice of Israel Arabic Radio since 1973. He is also an expert on Middle Eastern affairs having earned his Ph.D. degree from Princeton University’s Department of Near Eastern Studies, as well as an MPA degree from Harvard University’s Kennedy School of Government. Dr. Groiss taught for several years at the Hebrew University in the 1990s and 2000s. Between the years 2000-2010 Dr. Groiss served as chief researcher and, later, as Director of Research at the Institute for Monitoring Peace and Cultural Tolerance in School Education (IMPACT-SE, formerly known as the Center for Monitoring the Impact of Peace – CMIP), a non-political NGO committed to studying the attitude to the “other” and to peace in the Israeli and in other Middle Eastern curricula. During his work there Dr. Groiss studied hundreds of textbooks of various school subjects and authored over ten reports on Palestinian, Egyptian, Syrian, Saudi Arabian, Iranian and Tunisian schoolbooks. The reports are available on the Institute’s Web site http://www.impact-se.org. A summary of his ten-year research of this subject is to be found in “De-legitimization of Israel in Palestinian Authority Schoolbooks”, published in Israeli Affairs, Vol. 18 (2012), Issue 3, pp. 455-484, where he compares the PA schoolbooks with other Arab and Middle Eastern ones, including their Israeli counterparts.

Dr. Groiss has presented his findings since 2000 to both policy makers and people of the press on numerous occasions in various places, including the US Congress, the European Parliament, the UK House of Commons, the Israeli Knesset, the Canadian Parliament, the French Assemblée nationale and elsewhere. On the basis of his experience in this field, Dr. Groiss was appointed as a member of the Scientific Advisory Panel (SAP) of the Palestinian-Israeli Schoolbook Research Project commissioned by the Council of Religious Institutions of the Holy Land (CRIHL). The project was funded by the US State Department and ended in February 2013. Dr. Groiss’ evaluation paper of this research project is to be found here.