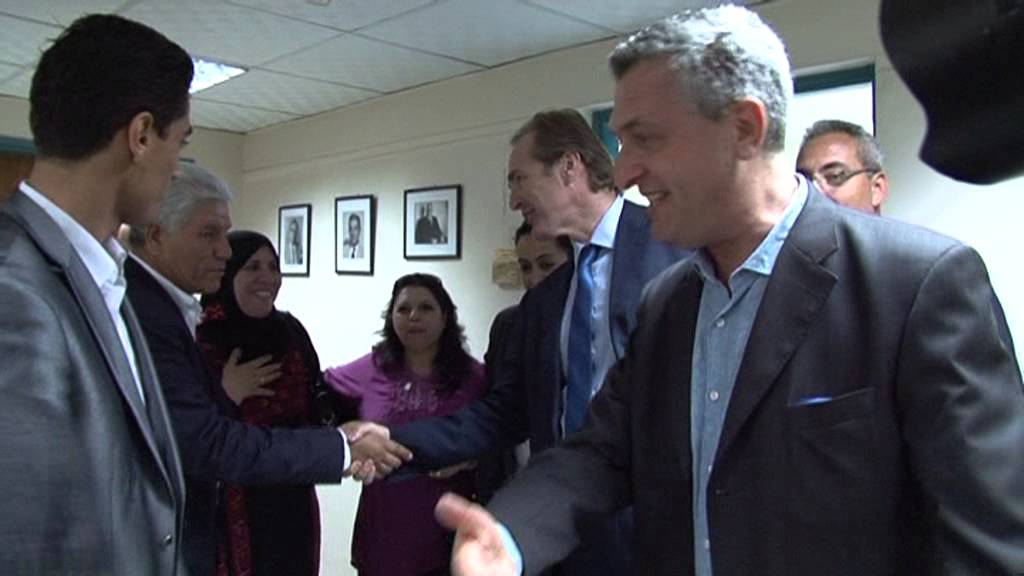 Mohammed Assaf, the 24 year old UNRWA resident who won the Arab Idol song competition has become an overnight and worldwide sensation. His victory song was entitled “Raise Your Keffiyah” a PLO anthem and a favorite of Yasser Arafat (before whom he had performed ) and included such incendiary lyrics as “Most precious homeland O Palestine how dear it is oh Arabs…when we were united the stone was very strong…the full moon rises on martyr (sic) may he rest his soul…” http://www.lyrics.net/sublyric/1259

The song has reverberated with UNRWA and the UN as the former appointed Assaf their first ever “Regional Youth Ambassador for Palestine Refugees” and “Goodwill Ambassador For Peace”. http://www.unrwa.org/newsroom/press-releases/mohammed-assaf-song-solidarity
PA President and Fatah leader Mahmood Abbas aka Abu Mazen had called upon Palestinians to support Assaf in his bid to win the Arab Idol contest and welcomed him as a hero after his victory,hosting him at his headquarters in Ramallah and designating him as an “honorary ambassador”.

Assaf’s radicalism did not escape the attention of Israeli leader Benjamin Netanyahu. In a letter to United States Secretary of State John Kerry regarding Palestinian incitement undermining peace the Israeli Prime Minister included a link to one of Mohammed Assaf’s songs which he performed in Hebron;

“(Linking) to a YouTube video that depicts the popular winner of Arab Idol Muhammad Assaf singing a song at the Barcelona soccer game in Hebron that spoke longingly of Israeli cities within the pre- 1967 lines as belonging to Palestine.” http://www.jpost.com/Diplomacy-and-Politics/Netanyahu-tells-Kerry-Palestinians-incitement-undermines-peace-322647

Besides his voice and vocal extremism Mohammed Assaf’s claim to fame is that he is a graduate of UNRWA schools, his mother was an UNRWA teacher and he was born in the “refugee” camp of Khan Younis in the now Hamas controlled Gaza also under the aegis of UNRWA.http://www.unrwa.org/Assaf

UNRWA Commissionar General Phillipo Grandi welcomed Assaf to his organisation’s Gaza headquarters and expressed his pride that Assaf was a product of UNRWA camps and schools.
“…Grandi added, “we are all truly proud that a young man who received his education in an UNRWA school in the Khan Younis refugee camp in Gaza and whose family has a long association with UNRWA has emerged onto the world stage to such universal acclaim… “

In Gaza, where Mohammed Assaf grew up Hamas and UNRWA have reached a modus vivendi in which UNRWA agrees to let Hamas have its way there while not interfering with their Islamist agenda which includes the takeover of the UNRWA workers union by the terrorist group.

“For the moment, Hamas and UNRWA seem to have an agreement that UNRWA may continue to function in Gaza so long as it does not engage in actions that significantly contradict Hamas’ world view,” one former senior UNRWA official, talking on the condition of anonymity, told Fox News…”

Hamas has also expressed their support for Assaf

According to Al Jazeera:

“His songs have even softened the hearts of some members of Hamas, which was reported to have once arrested him for publicly singing pro-Fatah numbers. In the run-up to the reality show’s finale, Hamas – which controls the Gaza Strip – threw its support behind Assaf, calling him “an ambassador for Palestinian art”. http://www.aljazeera.com/indepth/features/2013/08/20138134222260693.html

In a music video entitled “Ya Halili Ya Mali” which was filmed in the Burj UNRWA “refugee camp” Assaf is wearing a tee shirt with a gold keffiyah emblazoned on it while swinging prayer beads( which symbolize he 99 names of Allah) as a slingshot and can be seen at around 29 seconds into the video brandishing a sharp knife. The chorus of the song is reminscent of those in jihad videos accompanied by an ominous and militaristic drumbeat.

In his public comments UNRWA’s Goodwill and Peace Ambassador has made no secret of his and his fellow Palestinian’s murderous nationalist aspirations while claiming victim status and faithfully parotting UNRWA’s grievance mongering agenda.

After winning the Arab Idol competition in Lebanon Assaf stated that:

“A revolution is not just the one carrying the rifle, it is the paintbrush of an artist, the scalpel of a surgeon, the axe of the farmer,” he said. “Everyone struggles for their cause in the way they see fit. Today I represent Palestine and today I am fighting for a cause through my art and the message I send out.”http://www.theguardian.com/world/2013/jun/23/palestinians-mohammed-assaf-arab-idol.

In an interview with the UK Guardian he proclaimed:
“I am confident that I will see a free Palestine in my lifetime,” he said. “I sing about popular themes but they centre on the hopes of my own people – dreams of independence for the West Bank, for Jerusalem and for Gaza. We’ve been under Israeli occupation for decades…”Unity is the key – Hamas and Fatah should come to an agreement,” said Assaf. “It’s insane that we effectively have two governments at the same time as being colonised by Israel. It’s hugely frustrating for me, and for all Palestinians.”

The ‘oppressed’ Mohammed Assaf who is in the process of achieving fame and fortune in the United States and Europe recounted a blood libel to fawning “Palestinian/Arab” interviewer on The ‘Yalla/English’ program which said that Israel is attempting to exterminate the Palestinians and perversely twisting the reality of what they would do to the Jews if they ever had the chance:

“If they (the Israelis) had the opportunity they would get rid of us all. This is unfortunately their will…”http://www.youtube.com/watch?v=_CkChioJs_E

Such incendiary talk is typical of UNRWA’s Regional Youth and Goodwill Ambassador. Who has also stated that:”…I can’t differentiate between my art and my patriotic attitude.” Assaf condemned the ongoing Israeli occupation of West Bank and the poor living conditions in the Gaza Strip. He also stated that Palestinian prisoner Samer Issawi’s long-term hunger strike protest had inspired him. [20]…”http://en.wikipedia.org/wiki/Mohammed_Assaf

Assaf’s Islamist incitement also reflects UNRWA’s ties to terror related entities and individuals.While in the United States he visited the Washington headquarters of Islamic Relief USA an organisation with a documented connection to terrorists and Muslim Brotherhood related groups both in the US and abroad.

One of the main speakers at Islamic Relief USA fundraisers is Professor Hatem Bazian who called for an intifada in the United States.
http://www.discoverthenetworks.org/individualProfile.asp?indid=2173

IRUSA is a major contributor to UNRWA and funded a school for them in the Askar Camp. Director of UNRWA operations in the West Bank Barbara Shenstone stated:

“UNRWA looks forward to continued partnership with Islamic Relief. We hope that the new school facilities, built to our standards by Islamic Relief, are one of many more projects to be implemented with future generous contributions from Islamic Relief and its affiliate organisations.”
http://www.unrwa.org/newsroom/press-releases/unrwa-and-islamic-relief-inaugurate-new-school-askar

Mohammed Assaf’s visit to IRUSA’s HQ in Washington shows the collaboration between both it and UNRWA which have been tied to terrorism. In 2006 the UK based Islamic Relief Worldwide member Pakistani born UK national Iyaz Ali was arrested in Israel for assisting Hamas.http://www.mfa.gov.il/mfa/foreignpolicy/terrorism/palestinian/pages/british%20national%20arrested%20for%20assisting%20hamas%2029-may-2006.aspx

In his book “Roadblock to Peace” How the UN Perpetuates the Arab-Israeli Conflict: UNRWA Policies Reconsidered “veteran journalist and UNRWA expert David Bedein writes about the co opting of the UNRWA trade unions by Hamas and the scores of suicide bombers and terrorists who have attended or worked at UNRWA schools illustrating the radical Islamist incitement and indoctrination which is rampant in the UNRWA educational system.

Mohammed Assaf has become the “poster boy” for UNRWA and “Palestinians” worldwide. The Commissioner General Phillipi Grandi called him “a child of UNRWA” the UNRWA website boasted that he will be “bringing the voice of Palestine refugee youth to New York City.”http://www.unrwa.org/Assaf
Assaf sang at the UN for Palestine Solidarity Day and told the audience that:

“…I would like to remind you of the millions of other Palestine refugees just like me – the young men and women who are not standing here before you today. When we celebrate this International Day of Solidarity, they are the ones we need to remember. “
http://www.youtube.com/watch?v=xkWoxKjDA4I

The perpetuation of the myth of Palestinians as a displaced people who are suffering injustice because of Jews is a canard which is the raison d’etre of UNRWA and is a vile calumny aimed at instigating violence,deligitimizing the Jewish State and promoting antisemitism.

As of now Mohammed Assaf continues to garner accolades and adoration whereever he goes spreading hate and agression to Muslims and Arabs worldwide via his singing and public statements.

His true message can be seen in the knife he brandishes in his “Ya Halili Ya Mali “ (What I Have is Mine By Right) video which includes the UNRWA logo in its credits and in the lyrics of his Arab Idol contest winning song about a return to Palestine and glorification of martyrdom in (Ali Al Keffiyah)“Raise Your Keffiyah”.

UNRWA’s Goodwill and Peace ambassador embodies the organisation’s mission, to perpetuate theIsraeli illusion of the “right of return” as the reason to allow a fourth generation to wallow in UNRWA refugee camps.

David Bedein is the author of “ROADBLOCK TO PEACE- How the UN Perpetuates the Arab-Israeli Conflict: UNRWA policies reconsidered”,
Bella Rabinowiitz is a veteran research analyst.