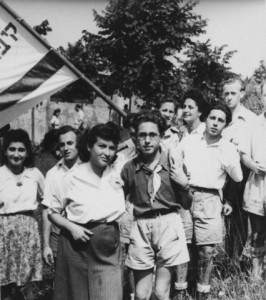 A Haganah member and others during Israel’s War of Independence. Photo: United States Holocaust Memorial Museum.

Most Westerners, including many Jews, are unaware of four fundamental facts about the Jewish homeland of Israel that would greatly increase their support for the Jewish State. The burden is on us to make these facts more widely known in the West.

#1 – The Jews Never Left: Although most in the West accept that Jewish biblical history happened, most believe that upon vanquishing the Bar Kochba revolt in 135 CE, the victorious Romans “exiled” Judaea’s surviving Jews – and that Jews did not return to Israel in meaningful numbers until the late 19th â€Žcentury Zionist movement.

Wrong. Solid evidence – Roman-Byzantine era synagogues, the Mishnah and Palestinian Talmud, Roman recognition of the Patriarch as head of the homeland’s Jews, and Jewish military and other aid to the 7thâ€Ž century Persian and then Muslim invaders – establishes that no such “exile” occurred. Archeologists have constructed a map of 9thcentury Jewish communities of which we have knowledge today. The Crusaders also acknowledged the month-long courageous Jewish defense of Haifa and the fact of Jews defending Jerusalem. We have much evidence of the Jews’ vibrant presence in their four holy cities – Jerusalem, Safed, Tiberias, and Hebron – and elsewhere in Israel through the ensuing six centuries of non-Arab Mamluk and Turk foreign rule. According to scholars, this gave the Zionists’ “real title deeds.”

#2 – Who Are The Palestinians? Us: Today’s Palestinian Arabs, whom everyone calls “The Palestinians,” claim descent from the pre-Israelite Canaanites, but if either side has Canaanite blood it’s the Jews. Archeologists trace Israelite presence back to the 12th câ€Žentury BCE, but are divided into “conquest” and “indigenous origin” camps. The latter believe that the Israelites populating the original Judean-Samarian hills were themselves Canaanites who began a new religion and lifestyle, not outside invaders.

The 7th century CE Arab invasion, which came storming out of the Arabian Peninsula, came 18 centuries later. Modern Israel in 1948 became the land’s next native state after the Jews’ ancient Judaea. Without exception, every ruler in between – Romans-Byzantines, briefly Persians, foreign Muslim dynasties that began as Arab but progressively fell under control of the Turks, Crusaders, Mamluks, and Ottoman Turks – was a foreign invader, and mostly non-Arab at that. During the post-Ottoman League of Nations’ Mandate, all of the land’s residents – Muslims, Christians, and Jews – were called “Palestinian.”

#3 – There are No Such Places as “the West Bank” and “East Jerusalem:” Though the Arab side, the Western media, and even, foolishly, we Jews constantly refer to “the West Bank” and “East Jerusalem,” these are not historic but recently invented terms to disassociate these historic centerpieces of the Jewish homeland from Jews. “Judea and Samaria” are not what the media has called “the biblical names for “the West Bank,” but are the actual Hebrew-origin names by which the homeland’s hill country has been known throughout history into the mid-20th â€Žcentury. In attempting to partition the remaining western Palestine in 1947 (the all-Arab created country named Transjordan, which were the lands of the Palestine Mandate east of the Jordan River, had already been lopped off from the Mandate in 1922), the UN did not refer to “the West Bank,” but to “the hill country of Samaria and Judea.”

Jordan invented the term “West Bank” in 1950 to disassociate it from Jews, after it illegally annexed the West Bank in 1948. In the past 3,000 years, Jerusalem has been the capital of three homeland states – Judah, Judaea, and Israel, all of them Jewish. Palestinian Arabs have not ruled Jerusalem for one day in history, and foreign Arab dynasties only for part of the time between the Arab invasion of 638 and Crusader conquest of 1099. Jerusalem’s present day renewed Jewish majority dates not from 1967, or 1948, or the First Zionist Congress of 1897. Jews again became Jerusalem’s plurality population in pre-Zionist mid-19th century times, and its never-relinquished majority well before the 19th century’s end – still during foreign Ottoman rule.

#4 – The Arab-Jewish Conflict Created More Jewish Than Arab Refugees: According to the British themselves,Palestine’s population at the end of the Mandate consisted of 1.2 million Arabs (Jewish sources claim only 1 million Arabs) and 600,000 Jews. Not all of those Arabs lived in the part that became Israel, and not all of them left. Estimates of the Arabs during the 1948 War who were told by their leaders to leave their homes to make way for the invading Arab armies range from less than 472,000 to 650,000. The vast majority never even saw one Israeli soldier. During the 1948 war and its aftermath, some 800,000-850,000 indigenous Middle Eastern Jews, some with roots going back to biblical times, fled vast Arab and other Muslim lands, forced to leave behind property and businesses for which they have never been compensated.

The fledgling Jewish state happily absorbed them. The Arab-Jewish conflict generated a two-sided refugee issue, not a “Palestinian refugee issue.”

If more people in the West understood and appreciated these four largely unknown fundamental facts, there would be much greater appreciation of the bona fides of the Jewish people’s deep homeland claim, and less talk about “Israel’s founding in 1948” and “Israeli occupation of East Jerusalem and the Palestinian West Bank.” In essence, if we forfeit the language, we forfeit our heritage and our history.

Lee Bender is the co-President, and Jerome Verlin is the co-Vice Present of the Zionist Organization of America-Greater Philadelphia District, and they are the co-authors of the book “Pressing Israel: Media Bias Exposed From A-Z” (Pavilion Press).