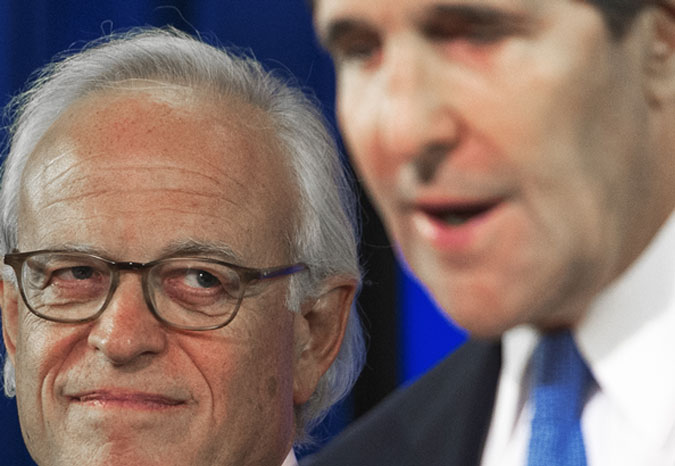 The New York Times recently published a long investigative report by Eric Lipton, Brooke Williams, and Nicholas Confessore on how foreign countries buy political influence through Washington think tanks. Judging from Twitter and other leading journalistic indicators, the paper’s original reporting appears to have gone almost entirely unread by human beings anywhere on the planet. In part, that’s because the Times’ editors decided to gift their big investigative scoop with the dry-as-dust title “Foreign Powers Buy Influence at Think Tanks,” which sounds like the headline for an article in a D.C. version of The Onion. There is also the fact that the first 10 paragraphs of the Times piece are devoted to that highly controversial global actor, Norway, and its attempts to purchase the favors of The Center for Global Development, which I confess I’d never heard of before, although I live in Washington and attend think-tank events once or twice a week.

Except, buried deep in the Times’ epic snoozer was a world-class scoop related to one of the world’s biggest and most controversial stories—something so startling, and frankly so grotesque, that I have to bring it up again here: Martin Indyk, the man who ran John Kerry’s Israeli-Palestinian negotiations, whose failure in turn set off this summer’s bloody Gaza War, cashed a $14.8 million check from Qatar. Yes, you heard that right: In his capacity as vice president and director of the Foreign Policy Program at the prestigious Brookings Institution, Martin Indyk took an enormous sum of money from a foreign government that, in addition to its well-documented role as a funder of Sunni terror outfits throughout the Middle East, is the main patron of Hamas—which happens to be the mortal enemy of both the State of Israel and Mahmoud Abbas’ Fatah party.

But far from trumpeting its big scoop, the Times seems to have missed it entirely, even allowing Indyk to opine that the best way for foreign governments to shape policy is “scholarly, independent research, based on objective criteria.” Really? It is pretty hard to imagine what the words “independent” and “objective” mean coming from a man who while going from Brookings to public service and back to Brookings again pocketed $14.8 million in Qatari cash. At least the Times might have asked Indyk a few follow-up questions, like: Did he cash the check from Qatar before signing on to lead the peace negotiations between Israel and the Palestinians? Did the check clear while he was in Jerusalem, or Ramallah? Or did the Qatari money land in the Brookings account only after Indyk gave interviews and speeches blaming the Israelis for his failure? We’ll never know now. But whichever way it happened looks pretty awful.

Or maybe the editors decided that it was all on the level, and the money influenced neither Indyk’s government work on the peace process nor Brookings’ analysis of the Middle East. Or maybe journalists just don’t think it’s worth making a big fuss out of obvious conflicts of interest that may affect American foreign policy. Maybe Qatar’s $14.8 million doesn’t affect Brookings’ research projects or what the think tank’s scholars tell the media, including theNew York Times, about subjects like Qatar, Hamas, Israel, Turkey, Saudi Arabia, and other related areas in which Qatar has key interests at stake. Maybe the think tank’s vaunted objectivity, and Indyk’s personal integrity and his pride in his career as a public servant, trump the large piles of vulgar Qatari natural gas money that keep the lights on and furnish the offices of Brookings scholars and pay their cell-phone bills and foreign travel.

But people in the Middle East may be a little less blasé about this kind of behavior than we are. Officials in the Netanyahu government, likely including the prime minister himself, say they’ll never trust Indyk again, in part due to the article by Israeli journalist Nahum Barnea in which an unnamed U.S. official with intimate knowledge of the talks, believed to be Indyk, blamed Israel for the failure of the peace talks. Certainly Jerusalem has good reason to be wary of an American diplomat who is also, or intermittently, a highly paid employee of Qatar’s ruling family. Among other things, Qatar hosts Hamas’ political chief Khaled Meshaal, the man calling the shots in Hamas’ war against the Jewish state. Moreover, Doha iscurrently Hamas’ chief financial backer—which means that while Qatar isn’t itself launching missiles on Israeli towns, Hamas wouldn’t be able to do so without Qatari cash.

Of course, Hamas, which Qatar proudly sponsors, is a problem not just for Israel but also the Palestinian Authority. Which means that both sides in the negotiations that Indyk was supposed to oversee had good reason to distrust an American envoy who worked for the sponsor of their mutual enemy. In retrospect, it’s pretty hard to see how either side could have trusted Indyk at all—or why the administration imagined he would make a good go-between in the first place.

Indeed, the notion that Indyk himself was personally responsible for the failure of peace talks is hardly far-fetched in a Middle East wilderness of conspiracy theories. After all, who benefits with an Israeli-PA stalemate? Why, the Islamist movement funded by the Arab emirate whose name starts with the letter “Q” and, according to the New York Times, is Brookings’ biggest donor.

There are lots of other questions that also seem worth asking, in light of this smelly revelation—like why in the midst of Operation Protective Edge this summer did Kerry seek to broker a Qatari- (and Turkish-) sponsored truce that would necessarily come at the expense of U.S. allies, Israel, and the PA, as well as Egypt, while benefiting Hamas, Qatar, and Turkey? Maybe it was just Kerry looking to stay active. Or maybe Indyk whispered something in his former boss’ ear—from his office at Brookings, which is paid for by Qatar.

It’s not clear why Indyk and Brookings seem to be getting a free pass from journalists—or why Qatar does. Yes, as host of the 2022 World Cup and owner of two famous European soccer teams (Barcelona and Paris St. Germain), Doha projects a fair amount of soft power—in Europe, but not America. Sure, Doha hosts U.S. Central Command at Al Udeid air base, but it also hosts Al Jazeera, the world’s most famous anti-American satellite news network. The Saudis hate Doha, as does Egypt and virtually all of America’s Sunni Arab allies. That’s in part because Qataris back not only Hamas, but other Muslim Brotherhood chapters around the region and Islamist movements that threaten the rule of the U.S.’s traditional partners and pride themselves on vehement anti-Americanism.

Which is why, of course, Qatar wisely chose to go over the heads of the American public and appeal to the policy elite—a strategy that began in 2007, when Qatar and Brookings struck a deal to open a branch of the Washington-based organization in Doha. Since then, the relationship has obviously progressed, to the point where it can appear, to suspicious-minded people, like Qatar actually bought and paid for John Kerry’s point man in the Middle East, the same way they paid for the plane that flew U.N. Sec. Gen. Ban Ki-Moon around the region during this summer’s Gaza war.

Another fact buried deep inside the Times piece is that Israel—the country usually portrayed as the octopus whose tentacles control all foreign policy debate in America—ranks exactly 56th in foreign donations to Washington think tanks. The Israeli government isn’t writing checks or buying dinner because—it doesn’t have to. The curious paradox is that a country that has the widespread support of rich and poor Americans alike—from big urban Jewish donors to tens of millions of heartland Christian voters—is accused of somehow improperly influencing American policy. While a country like Qatar, whose behavior is routinely so vile, and so openly anti-American, that it has no choice but to buy influence—and perhaps individual policymakers—gets off scot free among the opinion-shapers.

It turns out that, in a certain light, critics of U.S. foreign policy like Andrew Sullivan, John J. Mearsheimer, and Stephen Walt were correct: The national interest is vulnerable to the grubby machinations of D.C. insiders—lobbyists, think tank chiefs, and policymakers who cash in on their past and future government posts. But the culprits aren’t who the curator of “The Dish” and the authors of The Israel Lobby say they are. In fact, they got it backwards. And don’t expect others like Martin Indyk to correct the mistake, for they have a vested interest in maintaining the illusion that the problem with America’s Middle East policy is the pro-Israel lobby. In Indyk’s case, we now know exactly how big that interest is.