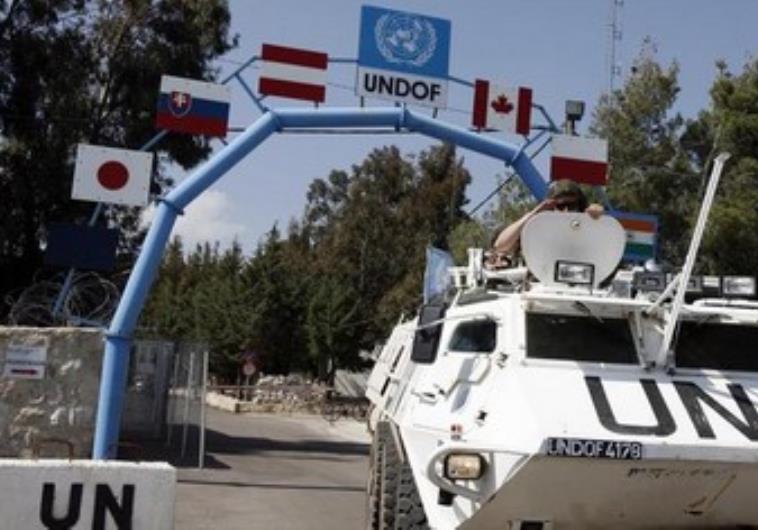 Much of what goes on in the world these days has a surreal quality.  But here’s a case that is sort of emblematic of a host of situations:

“Syrian rebels linked to Al-Qaeda have seized UN weapons, uniforms and vehicles from peacekeepers in the Golan and set up a ‘safe zone’ to wage attacks, the Syrian ambassador said Tuesday.

“The United Nations on Monday was forced to pull back hundreds of peacekeepers to the Israeli-occupied sector of the Golan (sic) after Syrian rebels advanced on their positions.

“Syrian Ambassador Bashar Jaafari said fighters from Al-Nusra ‘had succeeded in occupying all of the Syrian side’ of the Golan, driving out the troops from the UN Disengagement Observer Force (UNDOF).

“’The terrorists are now using United Nations cars, which hold the emblem of the United Nations forces in the Golan. They are using the uniform of the UNDOF, the weapons of UNDOF, the positions of UNDOF to shell on the Syrian army as well as on the civilians in the villages,’ Jaafari told reporters.”

UNDOF is charged with monitoring a buffer zone that runs across the Golan, between Israel and Syria.  Its 1,200-strong force is comprised of troops from Fiji, India, Ireland, Nepal, the Netherlands, and the Philippines.

This is the clearest map I was able to locate.  Note: In 1981, Israel applied civil law to the Golan, which has been in Israeli hands since 1967:

“Jaafari accused Israel, Qatar and Jordan of being behind a ‘very big plot’ to destabilize Syria by letting the Syrian rebels take control of part of the buffer to set up a ‘safe zone’ from where it can wage attacks.”

The UN is brokering an agreement for the reconstruction of Gaza.

According to a report just released by Robert Serry, UN Special Coordinator for the Middle East Peace Process:

“Reconstruction, recovery, governance and security in the Gaza Strip must take place in the context of the return of one legitimate Palestinian Authority to the Strip… (emphasis added)

If I were able to make genuine sense of this diplomatic double-talk, I would gladly explain it.  Apparently the UN is endorsing the Palestinian Unity government – which is on the verge of falling apart and which Hamas does not truly acknowledge in Gaza in any event – as the legitimate authority in Gaza.  That is, if the unity government works within the framework of the Quartet positions, which Hamas refuses to accept.

Reconstruction will also involve the private sector, and the UN will do “monitoring to ensure that construction materials will not be diverted from civilian to military uses.” (Emphasis added)

Apparently Israel has agreed to this.  Did we have a choice?  Did we seek alternatives?  ARE there alternatives?

The decision was made not to re-take Gaza.  Are we stuck with this, which will lead to no good? IF it happens.

Please note, there is not a word about demilitarization of Hamas.  He has the unmitigated gall to talk about lifting all remaining closures without addressing the dangers to Israel.

I would remind you: Monitoring the reconstruction project to make sure reconstruction materials (primarily concrete) will not be diverted to military purposes (construction of tunnels) in no way addresses the wholesale smuggling of rockets into Gaza (in pieces that can be easily smuggled), were all closures to be fully opened.

Where is our prime minister in all of this?  The fact that Serry – no friend to Israel – imagines that the crossings should soon be opened fully in no way indicates that Netanyahu has signed off on this.  He perhaps finds it wiser – more politic, in his style – to let Serry et al make pronouncements to which Israel has not agreed without bothering to contradict. There surely must be intention, as well, to do monitoring on our side – although Serry, of course, mentions no role for Israel.

Serry said the reconstruction project “must get up and running without delay.”

But a key source of mine says it’s not going to happen.  He seemed quite sure.  He was not fully explicit but here are are a couple of the reasons why not:

“The deputy Palestinian prime minister, Mohammed Mustafa, said last week that international donors are hesitant to fund Gaza’s reconstruction so long as Hamas remains in control there and the specter of future wars looms. Mustafa, a top official in the West Bank Palestinian Authority, said international bodies are eager for President Mahmoud Abbas’ Fatah forces to take on a leading role in Gaza.” (Emphasis added)

It occurs to me here that Netanyahu may read the situation much as my source does.

Now that I’ve stopped laughing, I will close with a bit of recent UN history:

After the Lebanon war in 2006, during which Israel seriously degraded Hamas capabilities, the Security Council passed Resolution 1701.  It set in place UNIFIL – UN forces that were intended to work with the Lebanese army to prevent Hamas from re-arming (smuggling rockets in from Syria).  Today Hezbollah has some 100,000 rockets.  (And I’ll address this major problem soon.)

My friends, did I not say this was surreal?  Let’s watch how it plays out now…

We have not yet heard from Hamas – and remember that there is no final ceasefire agreement yet.

I note here as well that there is no mention of a role for the EU, which was supposed to be solidly on board with assuring that Hamas did not re-arm, etc. etc.