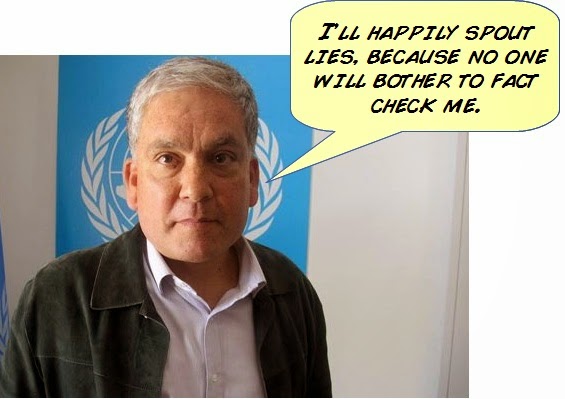 One of the criticisms of UNRWA is that it, uniquely among refugee agencies, confers refugee status on all descendants of refugees through the male line forever.

UNRWA has answered this by saying that the UNHCR has similar standards to give refugee status to children. That is what Chris Gunness said to Melanie Phillips in the Voice of Israel interview this past weekend that I had dissected (Part 1, part 2, part 3) Phillips followed up on that in an article in the Jerusalem Post:

I interviewed UNRWA’s spokesman Chris Gunness for my show on Voice of Israel, the new English-language radio station. Wasn’t UNRWA’s definition of a refugee indefensible? Uniquely, it is extended to all descendants through the male line of those who were displaced by the Arab war against Israel between 1946 and 1948. More than 60 years on, many of these “refugees” are not only still in refugee camps but their number has accordingly multiplied by more than 600 percent.

I decided to look into this a little more. Gunness has a detailed answer to this question on UNRWA’s website in a page called “Exploding the Myths: UNRWA, UNHCR and the Palestine Refugees.”

It is often said that UNRWA perpetuates the Palestinian refugee problem by granting refugee status through the generations and that handing the refugees over to UNHCR would not allow this. Is this the case?

This is not the case. As I have already noted, Palestine refugees are entitled to a just and lasting solution to their plight. In the absence of — and pending the realisation of — such a solution, it stands to reason that their status as refugees will remain.

Questions raised about the passing of refugee status through generations stem from a lack of understanding of the international protection regime. These questions serve only to distract from the need to address the real reasons for the protracted Palestinian refugee situation, namely the absence of negotiated solution to the underlying political issues.

UNHCR‘s Handbook on Procedures and Criteria for determining Refugee Status provides in paragraph 184: “If the head of a family meets the criteria of the definition, [for refugee status] his dependants are normally granted refugee status according to the principle of family unity.”

In effect, refugee families everywhere retain their status as refugees until they fall within the terms of a cessation clause or are able to avail themselves of one of three durable solutions already mentioned — voluntary repatriation, local integration or resettlement in a third country.

Also, Chapter 5 of the UNHCR publication, Procedural Standards for Refugee Status Determination under UNHCR’s Mandate is very clear that in accordance with the refugee’s right to family unity, refugee status is transferred through the generations. According to Chapter 5.1.2 “the categories of persons who should be considered to be eligible forderivative status under the right to family unity include:” “all unmarried children of the Principal Applicant who are under 18 years.”

Chapter 5.1.1 makes it clear that this status is retained after the age of 18. It states“individuals who obtain derivative refugee status enjoy the same rights and entitlements as other recognised refugees and should retain this status notwithstanding the subsequent dissolution of the family through separation, divorce, death, or the fact that the child reaches the age of majority.”

While Gunness is quoting the UNHCR Handbook correctly, he is purposefully misinterpreting it.

Amazingly, this gross misinterpretation of UNHCR rules is published on the official UNRWA site,

It appears that Gunness knows that he is lying about this, because he adds this caveat: “UNRWA is not in a position to speak for UNHCR and does not purport to speak for UNHCR. However, responses to your questions require reference to documents that are posted on UNHCR’s website and are available to the public. My responses are based on UNRWA’s understanding of the plain meaning of these documents as well as the Agency‘s own appreciation of its mission and its knowledge of the system of international law and practice that govern the protection of refugees globally.”

So now that UNHCR itself has made it clear that Gunness’ interpretation of its documentation is completely wrong, we can assume that UNRWA will correct that article, right?