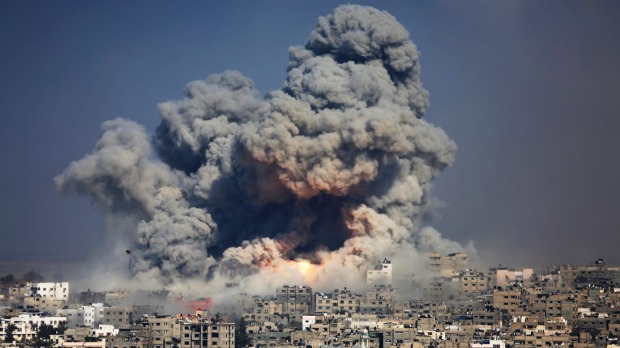 Two pages of the United Nations Human Rights Council’s recently released report on the 2014 Gaza conflict tell just about the whole story. The report, the work of the Human Rights Council’s Independent Commission of Inquiry, provides 183 pages of facts, legal analysis and conclusions about the conduct of Israeli forces and Hamas and other armed groups in Gaza. Although the report attempts to present at least an appearance of balance, let’s remember that beauty is only skin deep. Unfortunately, the report is replete with faulty legal analysis, unjustified presumptions and an astounding willingness to take Hamas’s claims at face value coupled with an unrelenting skepticism about Israeli efforts to comply with the law of war.

Back to those two pages, which sum up neatly the flaws in the report’s use and analysis of international law and its presentation of information. First, near the beginning, the commission summarizes the key principles of the law of war governing the conduct of hostilities: distinction, proportionality and precautions. What the report states about these principles is correct; it’s what it omits that is so significant.

And yet the commission simply omits this aspect of the principle of distinction altogether. One is left with the impression, therefore, that the law of war only imposes obligations in choosing the target of an attack and ignores the dangers of fighters comingling with civilians, using civilian infrastructure for military purposes or disguising themselves as civilians to gain a tactical advantage (such as a suicide bomber). This impression, however, is entirely erroneous. The law of war prohibits perfidy (disguising oneself as a civilian in order to benefit from the law’s protections while launching an attack); using protected objects, such as hospitals or religious buildings, for military purposes; and using civilians as human shields. All of these prohibitions rest on the principle of distinction and the obligation for those who are fighting to distinguish themselves from those who are not.

In the context of conflict in Gaza, where Hamas and other armed groups deliberately — as they themselves proclaim — comingle with the civilian population and turn the failure to distinguish into an art form, this omission is remarkable in its shortsightedness and the message it sends about the report’s methodology.

The report repeats this error of omission in presenting the principle of precautions. The principle of precautions states that parties to a conflict must take all feasible precautions to protect civilians and minimize civilian suffering during military operations. In particular, as the report states, parties launching attacks must take specific precautions, such as verifying that the target is a military objective; using a means and method of attack that minimizes harm to civilians; providing an advance warning when feasible; and cancelling an attack that is likely to cause excessive harm to civilians given the anticipated military advantage. These obligations operationalize the principle of distinction and put the law’s core purpose of protecting civilians into practice.

Once again, however, it’s what the report fails to state that is consequential and revealing. The principle of precautions does not only apply to the launching of attacks. Defending parties also have precautions: to remove civilians from the vicinity of military objectives; avoid locating military objectives in or near densely populated areas; and take other measures to protect civilians from the dangers of military operations. It may come as no surprise that violations of these precautions are the mainstay of the Hamas playbook. And yet the commission does not even mention these fundamental obligations in its statement of the principle of precautions. A piecemeal presentation of the basic legal framework thus sets the stage for a flawed pick-and-choose analysis of the parties’ conduct.

And now to the second of the two pages that tell the whole story of the report: the recommendations at the end. The commission issues numerous recommendations for the government of Israel and the Israeli military with regard to the conduct of hostilities, investigations into potential violations, the choice of weapons, the identification of targets, the issuing of warnings and broader “structural issues that fuel the conflict.”

The recommendations directed at Hamas and other Palestinian armed groups call on such groups to end attacks on Israeli civilians and civilian objects — critically important, to be sure — but the commission makes no recommendations at all with regard to the use of civilians as human shields, comingling with the civilian population and using civilian objects and infrastructure for military purposes (such as launching rockets from hospitals, mosques or United Nations schools), or fighting while disguised as civilians. When these fundamental legal principles get short shrift in the statement of the legal framework, their wholesale absence from the recommendations section is a foregone conclusion.

With these two pages, the report hands Hamas and other Palestinian armed groups a free pass to continue their modus operandi. A report analyzing the conduct of Israel and Hamas under the law of war has to use all of that law. The report’s glaring omissions of foundational legal principles emasculate the law, weakening the essential tools for the protection of civilians and emboldening those who use civilians as pawns for their own strategic gain.

Blank is clinical professor of law and director of the International Humanitarian Law Clinic at the Emory University School of Law.