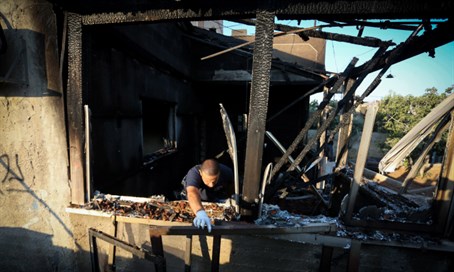 Assaf Gibor, a journalist on Arab affairs with NRG and Makor Rishon, made some important revelations in speaking with residents of the Arab village of Duma, where a home was burned on Sunday night belonging to the brother of a resident whose house was the target of lethal arson attack last month.

In the attack last month alleged “Jewish terrorists” were quickly blamed, apparently due to the presence of Hebrew graffiti at the home, although several large question marks have emerged in the case. This week a second home belonging to the Dawabshe family was burned down, further raising those questions – which include reports of a long-standing feud in the village.

Gibor appeared on Channel 20 on Tuesday, where he gave a recount of this week’s fire.

“Three children and their mother were sleeping there, there’s a fire and they’re evacuated from the site. The village council claims it was an electric malfunction, afterwards they revise their statement and say it was a Molotov cocktail, later the third time they told – at least me – that the Israeli intelligence sent Arab collaborators from the adjacent villages,” he said, indicating he was told that Arab assailants caused the fire.

At this point the show’s host, Avri Gilad, cut in laughing, commenting, “their ability to invent stories…wow. Why didn’t they say immediately it was settlers and that’s that? Because the Israeli media would buy it in a second.”

In answer, Gibor said, “firstly because they didn’t find ‘price tag’ vandalism, so therefore they claim of course that it was settlers, but in an attempt to split up the incident three weeks ago and the current one, they say it was an incident meant to silence the one from three weeks ago.”

Gilad then asked the correspondent, “do you know anything about ‘settling accounts’ (i.e. revenge as part of an internal conflict – ed.) within the hamulot (Arab clans – ed.)?,” noting on the reports of a feud in the village spanning nearly two decades.

“Yes, three-fourths of the village are members of the Dawabshe family, the village is comprised of two central families, Dawabshe and another family, and therefore the question is who would have wanted the fire (to happen),” he replied.

“There are lots of questions at the scene itself, and also the question why no one arrived at the scene, particularly members of the Shabak (Israel Security Agency – ed.) and security forces who pounced on the previous scene three weeks ago.”

Detailing the questions from the scene of the fire, he noted they include “the space heater that was found in the middle of August (at the height of summer heat – ed.) in the center of the room, or the fact that the room that was burned was precisely the one that didn’t have the kids in it.”

“There are a lot of questions and no one is investigating them,” he stated.

The host stepped in at this point, posing the possibility that “maybe they’re investigating but the answers still aren’t known or the time hasn’t come yet.”

“The Palestinian police were the only ones who arrived on the scene, Israeli police and security forces didn’t arrive there, my colleagues from the media also didn’t arrive there – they were told by all sorts of military and security sources that it isn’t a story you have to touch on, that it’s some sort of electrical short or something internal and leave it, don’t let them interfere in investigating the first incident,” Gibor replied.

“I think that these questions need an answer,” emphasized the journalist.

He noted that some Palestinian Arab media outlets are claiming that Jewish residents of the region were responsible for both fires, and concluded, “the incitement of course works overtime, but the investigation isn’t being carried out.”

Politicians from all ends of the spectrum hurriedly accused Jewish extremists of responsibility for last month’s arson in Duma, in statements that were immediately followed by a slew of Arab terror attacks, including attempts to burn down Joseph’s Tomb, an apparent arson southeast of Jerusalem that released asbestos-laden ash on wide swathes of the city, a near-lethal firebomb attack in Jerusalem’s Beit Hanina, and numerous other attacks of varying degrees.