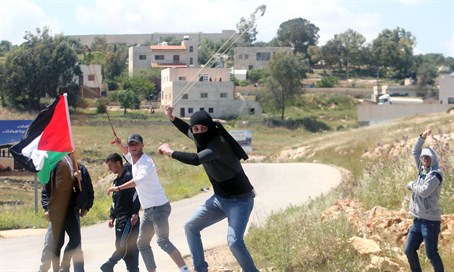 The viral video of an IDF soldier being attacked by Palestinian villagers has once again shone a spotlight on the Arab village of Nabi Salah, a hotbed of anti-Israeli violence and provocations.

Local Arabs from the Tamimi clan, together with a permanent contingent of foreign left-wing extremists based at the village, clash with Israeli security forces every Friday, as they attempt to attack neighboring Jewish villages such a Neve Tzuf and Halamish.

The controversial footage – in which a soldier is forced to abandon an arrest of a rock-thrower – has caused a storm of controversy in Israel. Many right-wing legislators, such as Yisrael Beytenu leader Avigdor Liberman, see it as proof of how the army’s hands have been tied by the political echelons and called for an urgent review of the IDF’s rules of engagement in dealing with rioters.

But others have questioned why authorities are not being more proactive in tackling what are essentially staged provocations, in Nabi Salah and elsewhere, many of which happen like clockwork each and every week.

Speaking to Arutz Sheva, David Bedein of the Center for Near-East Policy Research explained that the clashes are part of a longstanding attempt by Palestinians to seize control of a well owned by the Jewish village of Halamish.

Since losing a legal battle in the Israeli High Court, the Arab villagers – led by the notoriously violent Tamimi clan – have staged weekly attempts to take the well by force. Each time the IDF turns up to repel them, in what has become a weekly ritual involving anarchists and left-wing activists from both Israel and abroad.

“They notify the media ahead of time, every Wednesday, that Friday they will be there,” Bedein said. The “memo” is rgularly communicated via Gush Shalom, a left-wing NGO that receives significant foreign funding.

“What’s amazing is our agency for the last five years have asked the police: ‘If you know ahead of time they are going to be violent, why don’t you stop them?’ And they say, ‘Well this is a matter for the general security services or for the Israeli security establishment.’

“It’s about time the people throughout Israel make this demand of the army and of the police, that they stop these guys before they conduct their demonstrations – because they’re not demonstrations, they’re riots – and anyone who doesn’t believe it, just look at the YouTube (videos) they put out.”