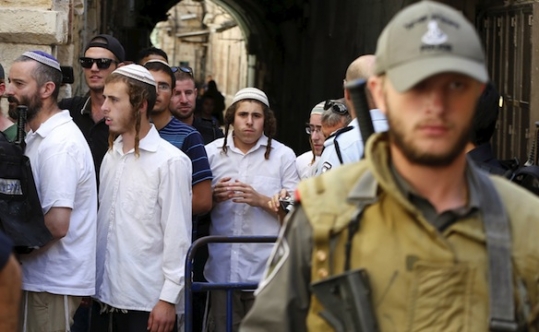 On Wednesday morning I had the privilege of joining Sephardic Minyan at Judaism’s holiest site-the Western Wall on our holiest day, Yom Kippur. Wrapped in my white Kittel and Tallit, the minyan felt like a local call to heaven. Prayers for family, for good health, for friends in need, and recurring prayers for the ultimate but elusive blessing of peace.

It took three minutes and 100 feet from the Kotel Plaza to be reminded how distant peace in The Holy Land remains. As I turned into the Arab Suk, I was greeted by a group of young Muslim women and one young man.  Armed with iPhones, they were clearly hoping to instigate a phony selfie confrontation with the three young Israeli border policemen so it could be immediately go viral on countless pre-cooked hateIsrael hashtags, websites, and with any luck, BBC and CNN. This, on a Yom Kippur day that coincides with the Eid al-Adha feast that recalls the willingness of our Abraham to sacrifice his son. Jews believe he chose Isaac; Muslims believe he chose Ishmael.

The Israeli police didn’t bite, so I was quickly selected for an edgy chorus of “Allah Akbar.” I too believe that “G-d is Great” but this wasn’t a kumbaya ecumenical moment. The tone of contempt on their lips and hate in their eyes not only defiled my spiritual moment, it was another, small piece in a larger, carefully-orchestrated campaign by the Palestinian leadership, mixing sticks & deadly stones and (religious) words to heat up a third Intifada. Beyond the nexus of the two religious holidays, the intensifying violence– physical and verbal– coincide with two upcoming events at the UN: The symbolic hoisting of a Palestinian flag outside UN headquarters next week and PA President Mahmoud Abbas’ appearance later this month at the United Nations’ 70th General Assembly.  Now in the 11th year of his 4-year term, some expect Abbas to use the UN rostrum to vacate some or all of the historic Oslo Accords with Israel.

Whether Abbas risks losing US funding with such a draconian move, he’s already thrown the two-state solution under the bus with moves like this recent screed about Jews on the eve of the Jewish New Year after Israelis forces cleared out pipe bombs being stored in the al-Aqsa Mosque:

“Al-Aqsa is ours and so is the Church of the Holy Sepulchre. They [meaning Jews] have no right to desecrate them with their filthy feet. We won’t allow them to do so and we will do whatever we can to defend Jerusalem.” (As reported by the PA’s WAFA news Agency)

Why is all this happening now?

Abbas is signaling President Obama and Prime Minister Netanyahu that he no longer cares about the two-state framework reached by his predecessor Yasser Arafat and Shimon Peres. The Palestinian president apparently believes that painless path to a Palestinian state is available by a bullet-proof majority at the rubber-stamping UN General Assembly. So who needs US support or Israelis’ approval.

Secondly, Abbas hopes that playing tough with Israelis, he will win him back some of the Palestinian Street. As it stands, Palestinians are so disgusted by his PA’s corruption, that polls show Hamas would win a landslide victory on the West Bank, if Abbas dared call new elections.

There’s one other critical audience Abbas is desperate to bring on board: The Muslim world.

A few years ago I brought seven Indonesian leaders representing 60 million Muslims to Israel. At the end of the week, here’s what the leader told me:

”Before we came here, we were always told that there is a religious war here and that the Palestinians are defending Islam’s third holiest site. But this week we prayed twice at Al-Aqsa without any problems, visited your Western Wall, and even danced at a Chanukah party in Kiryat Shemona. We also spent a day in Ramallah speaking with Palestinians. What we see here is apolitical, not a religious dispute. Political? We have plenty political fights back home.”

Abbas sees an Arab world imploding and a stream of refugees that includes major Muslim countries overwhelming Europe and dominating world headlines. It’s apparent that only images of a religious war with Jews can make the world media to refocus on the Holy and force the Muslim world to make Abbas’ agenda a priority.

For now, we will have to rely on Prime Minister Netanyahu’s government, Israeli Intelligence, and 19 and 20-year-old soldiers to hold the line and to pray for G-d’s mercy that Abbas’ gambit fails.