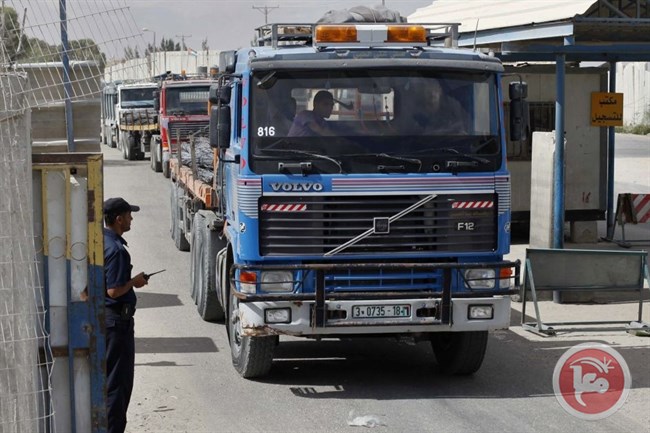 BETHLEHEM (Ma’an) — The Israeli authorities on Tuesday accused The Gaza Strip’s de facto leaders Hamas of stealing reconstruction material to sell on the black market and use to build tunnels.

The official said in a statement that “Israel knows Hamas and some contractors and dealers use the construction materials for other purposes,” alleging that they were being stolen and sold on the black market.

A spokesperson for Hamas could not be immediately contacted for comment.

According to the Israeli statement, Palestinian Authority Ministry of Public Works and Housing Mufid al-Hasayna recently alleged that 7,000 tons of cement that entered Gaza had been stolen by a group of five individuals, who later sold it for 400,000 shekels ($102,283).

Atilla warned that if the practice continued, Israel would revoke Israeli entry permits given to Gazan contractors and their families, and stop all shipments of reconstruction material into the Gaza Strip.

“Israel does not intend to stop the construction process, because reconstruction will increase employment in Gaza, which will affect the residents’ needs,” Atilla said.

He claimed that if Israel does stop shipments, “the dealers in the black market would be fully responsible.”

On Thursday, the UN Special Coordinator for the Middle East Peace Process Nikolay Mladenov applauded reconstruction efforts following a visit to Gaza, but said that thousands of homes were yet to be built.

“I am too well aware that work is yet to start on the homes of some 74 per cent of families displaced in 2014,” he told the UN Security Council.

Mlladenov did not accuse Hamas of taking advantage of the reconstruction effort, but did criticize the movement for continuing to dig tunnels and fire rockets into Israel.

Reconstruction of the Gaza Strip has been severely hindered by Israel’s nine-year military blockade, which tightly controls shipments into the territory.

The UN reported last year that the Strip could become “uninhabitable” within five years if current trends continue.