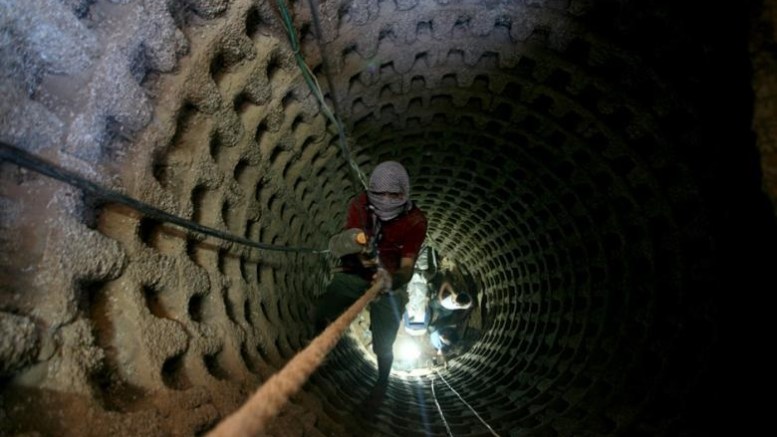 Israel has determined that Hamas continued to expand its tunnel network in the Gaza Strip.

Israeli security sources said the Hamas regime was upgrading tunnels as well as building deeper passages from the Gaza Strip to neighboring Egypt.

They said the Hamas effort was meant to bypass Egypt’s siege of the Gaza Strip and ensure the flow of military equipment from the Sinai Peninsula. “They are digging deeper and longer tunnels into Sinai,” a source said.

The sources said the Hamas tunnels now exceed three kilometers, beyond the one-kilometer buffer zone established by the Egyptian Army along the Gaza Strip. They said the tunnels were enlarged to enable passage by trucks.

“These enormous tunnels, some of which stretch for over three kilometers, are designed to traverse the security zone Egypt set up between the border with Gaza and the Sinai,” Israeli military analyst Alex Fishman said.

The sources said the latest tunnels contained electricity as well as communications to enable the rapid flow of smuggled weapons from Sinai to Gaza. But they said the rapid construction of the tunnels came at the expense of safety and sufficient amount of concrete. In many cases, they said, Hamas was substituting concrete with fiberglass.

On March 14, another Hamas tunnel collapsed in Gaza City near the Israeli border. Hamas said a soldier was killed, the latest casualty in a series of tunnel collapses.

Still, the Egyptian barrier along the Gaza Strip has sharply reduced the Hamas weapons flow. The sources said Hamas was trying to compensate for the Egyptian restrictions by expanding military production.

“It has become difficult for Hamas to smuggle weapons into the Gaza Strip,” Israeli Defense Ministry official Amos Gilad told Israel Defense magazine. “It is difficult for them to attack Israel, because Israel had delivered a serious blow to them, but they are determined to maintain the capability of attacking Israel, and they do everything they can to manufacture weapons and rockets.”