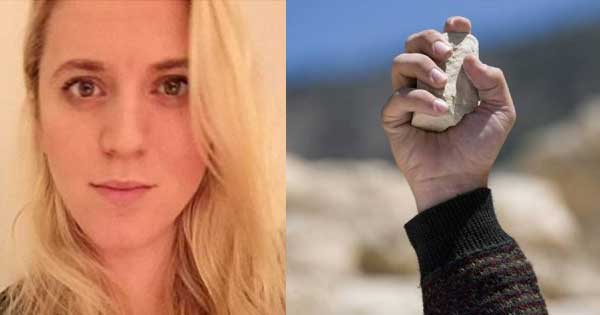 The journalist Valentina Xhaferi went to the Stockholm suburb of Tensta to record a television program about stone throwing.

But once there, she and the cameraman were chased away and had stones thrown at them.

– They thought we crossed the limit and that we were standing on their ground, says Valentina Xhaferi, to the Swedish newspaper Expressen.

Police officers say that threats and stone throwing have become daily events when they are patrolling in some of the suburbs of Stockholm.

In connection with a story about this, investigative journalist Valentina Xhaferi from the TV channel TV8, along with a cameraman, went to the no-go-zone of Tensta in Stockholm.

Police officers testify about how they are subjected to stone throwing in Tensta. Valentina Xhaferi wanted the people living there to be heard about what really lies behind the headlines coming out of the suburb. She got some hard answers, literally, as they were themselves attacked – and chased away.

They went to Tensta center, where they set up the camera and started shooting film clip images to the report. They made contact with a person who agreed to be interviewed. But then he walked away and told them to wait for him to come back. After five minutes, another man approach the camera man.

“Why are you filming?” he asks, and sounds very upset. Then he goes away only to return with his pals.

– They thought we crossed the limit and that we were standing on their ground. That we could not stand there and work, says Valentina Xhaferi.

The situation becomes bad and she asks them to leave.

– Then he becomes very, very angry and says he’ll get stones and show us what stoning is. When I saw that he was armed with a stone I just wanted to get out of there, says Valentina Xhaferi.

Then three guys come against her from the subway and ask what they are doing there. The cameraman push the record button on the camera and captures what happens. They behave threatening, calling Valentina Xhaferi names, and kick the camera equipment.

– It was impossible to calm them down. I pulled back and tried to calm down everyone, while trying to get myself and my colleague out of there. I become very anxious and have a feeling that the situation is going to pop. That’s when a guy throws a stone at us.

The stone strikes the ground. What the film is not showing is that they also got coffee poured over them. Valentina Xhaferi says she shouts at them that it’s not okay. Then she and the cameraman is forced to grab their equipment and flee the scene.

A week later, they went back and recorded the report in the company of policemen.

– I do not take it personally, but I think it’s really bloody bad not to be able to make a recording in a public place. That we must be protected by police, says Valentina Xhaferi.

Police estimates that there are around 55 such no-go-zones in Sweden already, and with the current out-of-control Muslim immigration to Sweden, there will be more, and they will be larger, until Sweden is a no-go-zone.