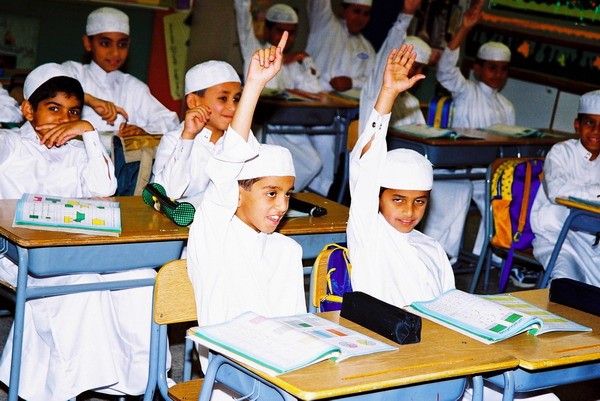 Back in March, Dr. Anthony Harper, correspondent with the Intermountain Christian News,  a member of the White House press corps, asked a question of the spokespeople of both President Obama and Vice President Biden, who had just returned from a middle east tour. The question was straightforward, asking for comment on the state of the Palestinian Authority school system, whose curriculum is used for half a million students in the education institutions of UNRWA, the UN Relief and Works Agency. The answer that Dr. Harper r received had no basis in reality:

Consider the evidence that points in the other direction:

Fortunately, the US constitution relies on checks and balances in the  formulation of US foreign policy.

From my informal meetings with officials of the all-powerful  Middle East Subcommittee of the US House Foreign Affairs  Committee and the Near East US Senate Subcommittee of the US Senate Foreign Relations committee, I can report with authority that there is readiness on the part of the US Congress  challenge US government assertions about Palestinian education, as taught in US –funded UNRWA schools.

Two key elected officials in the US Congress who must soon decide as to whether they will ask the GAO, the respected US General Accounting Office, to issue an independent report on the state of  PA/UNRWA education. Those officials are: Senator Jim Risch, (R-Idaho), head of the Near East US Senate Subcommittee of the US Senate Foreign Relations committee   and  Rep. Ileana Ros-Lehtinen , chair of Middle East Subcommittee of the US House Foreign Affairs  Committee

With almost all political eyes focused on the US presidential election, the time has come to focus attention on these powers that be in the US Congress, so that elected officials on Capitol Hill will advise and consent the US government and uphold the values of the US Constitution.  The moral principles of the American people   would never allow a war curriculum to be funded by the US government.

Senator Risch and Rep.  Ileana Ros-Lehtinen are now pressured by those who support the status quo to do nothing.

Senator Risch and Rep.  Ileana Ros-Lehtinen now need feedback from people of integrity, to ask for transparency in the conduct of US Middle East education policy.