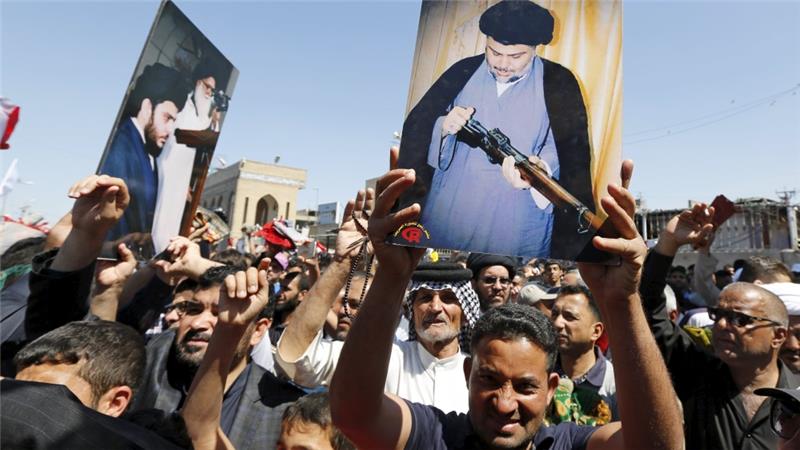 A political crisis at one end of the Arab world and a humanitarian disaster at the other this weekend highlighted one of the most important stories of our time. First, as the Wall Street Journal reports:

Protesters loyal to cleric Moqtada al-Sadr stormed Baghdad’s government seat, occupied the Iraqi parliament and even attacked a senior lawmaker. They withdrew Sunday, but a committee of Sadr supporters organizing the protests said demonstrators would return after an Islamic religious holiday which ends Tuesday, according to Iraqi state television.

[..] Iraqi officials were forced to call back troops from the front lines in Anbar Province in April to protect the capital amid protesters’ threats, as U.S.-backed Iraqi forces are preparing for a campaign to recapture Iraq’s second-largest city, Mosul.Iran-backed militia groups aligned with Iraq’s government announced late Sunday night that they are deploying fighters in Baghdad to help secure the city.

Meanwhile, at the other end of the Arab world, off Libya:
More than 80 migrants are feared to have drowned in a shipwreck late last week close to the Libyan coast, an aid agency said, less than two weeks after hundreds of migrants are believed to have died on the perilous Libya-to-Italy route.

“According to the testimonies gathered by the International Organization for Migration in Lampedusa 84 people went missing,” IOM spokesman Flavio di Giacomo wrote in a tweet.

These are just two of many stories pointing to one of the major, ongoing narratives shaping our world: the implosion of the Arab republics and the comprehensive failure of postcolonial political development in the “modernizing” Arab states. The traditionalist monarchies clearly are doing better than the republics, and though that is partly due to the oil revenues than keep so many of them afloat, it is also due to the superior ability of monarchies to balance traditional power centers.

There are many consequences of the long decline and fall of the modernizing Arab republics: a power vacuum that leaves Arab world open to intervention, most recently by Russia and Iran; cultural and social crisis that made fanatical jihadi movements possible; economic crisis and vast migration; the accelerating collapse of order and security; and most recently, the inability of governments to control much of their territory and the rise of quasi-independent separatist militias as the foundering postcolonial states continue to weaken.The U.S. has tried its hand at nation-building repeatedly, in ways ranging from armed intervention to the provision of technical assistance and encouragement to no-questions-asked aid. We have met with no real success, and we have no real idea what to try next. The religious nutcases claim to have an ideology that will fix things, but there is little sign that they will be more successful than their predecessors. So it looks as if for the foreseeable future, the rest of the world is going to have to deal with the consequences of Arab failure without being able to do much about the underlying conditions.Among the likely consequences of this reality: growing support within and beyond the region for regimes that, however ugly they may be from a human rights point of view, can guarantee at least a measure of order. There will be less attention being paid to the Palestinian issue as larger and more immediate problems capture the world’s attention. (Look for the Israeli argument that the Palestinians do not have, and cannot soon build, a functioning state structure capable of either making peace or of keeping radicals from attacking Israel after peace is signed will likely gain force within and beyond Israel.) There will be more pressure inside Israel to expand settlements given the weakness of the Arab world. There will be greater competition for influence between Gulf monarchies, Iran, Russia and others seeking to fill the vacuum. And there will be greater internal stresses in EU as the frontline EU states with long Mediterranean coasts and exposure to the migration surge face growing problems.What we are seeing is not so much a clash between civilizations as a crisis of Arab civilization: the failure of the Arab world to master modernity—to find a way to be economically and politically successful under modern conditions without losing the core cultural and social values. This is comparable to what happened in China in the 19th century, when China failed to find a way to adapt Western methods and ideas to Chinese conditions—which led to decades of state failure, weakness, and immense suffering for the Chinese people.