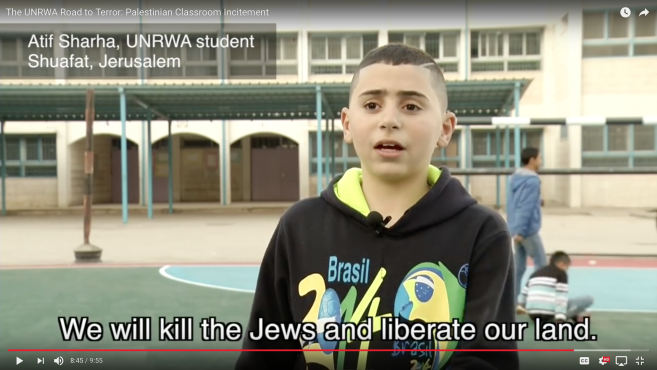 “Stabbing and running over Jews brings dignity to the Palestinians,” one boy studying at a Jerusalem school funded by the UN agency for Palestinian refugees – UNRWA – told international video journalists commissioned by an Israeli think tank.

The crew spoke to numerous others – all of them upper primary school age or young secondary school pupils – with similar views. “I will fight. I will run a car into them,” said a Amin Swety, a boy wearing a baseball cap and a hoodie.

Standing in a playground Mohammed Rishak said: “We have to constantly stab them; drive over them and shoot them.”

The filmmaker David Bedein is citing his film to suggest that extremism is rife in UNRWA schools, and urging Western states to condition funding on a promise that it will address this.

He says that the film has  a special post-election message to Australia.

He wants the Western states – including Australia – that fund UNRWA to the tune of $1.6 billion a year to start conditioning their donations on a process of reform. “The name of the game is starting to make conditions for funds,” he said.

And now, with the upheaval of  the Australian election over, Bedein will be urging the new government in Canberra to condition its funding to UNRWA on educational changes. A review of Australian funding to UNRWA was expected recently but was understood to be delayed due to the election.

“The message to the new Australian government is one of introspection and accountability,” Bedein said.

“This, and to consider that if Australia is giving money, it should condition aid on reform.”

Several of the pupils emphasised that the views come from their teachers. “Yes, they teach us that the Zionists are our enemy and we must fight against them,” said Nur Taha.

A boy called Afafat noted: “They teach us in school that Jews are fickle bad people.”

He went on to say: “I am ready to stab a Jew and drive over them.”

Another pupil, Mohammed Kashur, commented: “At school they teach us about Jews. They teach us that they are a bad people. They killed our young.”

Atif Sharha said: “At school they teach us that al-Aqsa and all of Palestine is ours.” Another pupil repeated the propaganda claim that “Jews lie” when they say that a Jewish temple stood in Jerusalem.

The film UNRWA Road to Terror: Palestinian Classroom Incitement, was released on YouTube by the Centre for Near East Policy Research. As well as commissioning interviews with students, Bedein gathered quotes from textbooks used in UNRWA schools.

Young children are seen in class chanting after a teacher that “Palestine is the Arab land from the river to the sea.”

They then chant that they want cities that are within Israel’s internationally accepted borders, saying: “We want Haifa; we want Acre.”

One fifth grade book presents a poem that has Palestinians returning to what is now Israel “under the flag of glory, jihad and struggle.”

A seventh grade text says that the clash of weapons “is pleasant to my ear, and the flow of blood gladdens my soul.”

The film features Nail Shaath, a senior official in the Palestinian Authority, which sets the curriculum in Palestinian schools, denying that schools promote violence.

“There is no incitement or racism in our curriculum,” he claimed. “Our curriculum is one of national democratic education. I challenge anyone to identify any aspect of racism, human rights violations or non-religious teachings in our textbooks.”

Bedein said that he has risen to Shaath’s challenge, illustrating that these problems are rife in the textbooks and beyond, and he is now demanding widespread reform in UNRWA schools.