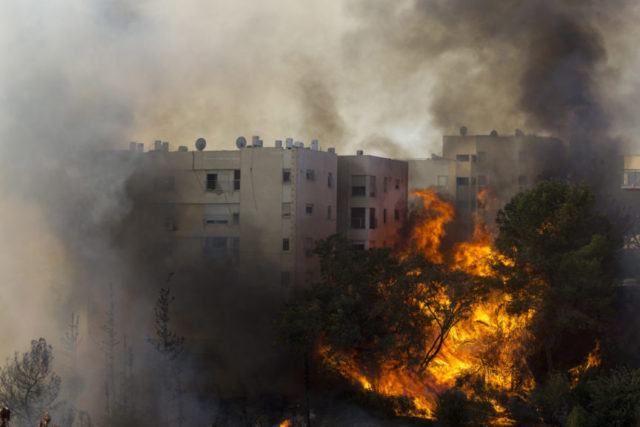 This week, while Arab arsonists lit massive fires of war throughout Israel, the Center for Near East Policy Research concluded a new study of  newest Palestinian Authority (PA) schoolbooks used in schools operated by the United Nations Relief and Works Agency (UNRWA) in Judea, Samaria, Gaza and Jerusalem,  published in 2014-2016 and authored by veteran journalist and scholar of  Islamic studies, Dr. Arnon Groiss.

The most recently PA published books incite 500, 000 UNRWA students to join a violent struggle to liberate  territories inside pre-1967 Israel, where fires burn today. .The “Right of Return” , as taught in UNRWA schools, means that each child must engage in a war to on the “settlements” that replaced homes and villages where the students are taught that his grandparents and great grandparents came from. The student learns from PalestineRemembered.com what his village look like, and which “settlement” has usurped what he believes to be the family home that awaits him.

A 25 page executive summary can be found at:

UNRWA betrays its moral obligation as a UN agency,  adopting   textbooks to indoctrinate children in  the art of total warl.

The new study shows that PA schoolbooks used by UNRWA  make no pretense of following the principles agreed on within the Oslo Accords,-  mutual recognition, resolution of the conflict by peaceful means only and  rejection of violence.

Instead, new PA/UNRWA school books adopt a threefold attitude of de-legitimization, demonization and indoctrination for every child to engage in the war  to decimate Israel.

De-legitimization, in this case, means denying Jews the right to life in the land.

New PA/UNRWA school books reject Jewish presence in the country in antiquity and event negate the idea that there were holy places to the Jews, such as the Western Wall in Jerusalem, the Temple Mount, The Cave of the Patriarchs in Hebron and Rachel’s Tomb in Bethlehem-  all of which are described as Muslim holy places usurped by Jews.

Demonization plays a vital part in the UNRWA textbook war.

Such portrayals of Jews can easily motivate an UNRWA student to kill. It would be an understatement to say that PA books  in UNRWA schools never discuss peace or co-existence with Israel.  Instead,  they promote a war to liberate Palestine, all of Palestine,  with no battle not restricted to  Judea, Samaria and Gaza. Radical Islamic motifs –Martyrdom, Jihad, and Ribat (standing on guard against the enemies of Islam)– “values” taught for UNRWA students to exalt..

These findings cast a shadow over UNRWA as a UN agency committed to peace, since this in the one UN agency uses texts that call for Jihad , eliminate Israel from maps, falsify history and historical documents and deny any  recognition of Israel, a member in good standing of the UN since 1949. as a sovereign state. In the new UNRWA books, Israel is replaced by Palestine as the sovereign state in the region in text as well, not only on maps: “The countries of the Levant [Bilad Al-Sham in Arabic] are Palestine, Jordan, Syria and Lebanon” (Islamic Education, Grade 2, Part 1 (2014) p. 72); “…The countries of the Levant [Bilad Al-Sham] presently consist the following states: Palestine, Jordan, Lebanon and Syria”. In addition, Tel Aviv, is defined for the first time as a city established by Jewish intruders  and, accordingly, not shown on the map, which now appears on the UNRWA map with an Arabic name (Mathematics, Grade 1, Part 1 (2016) p.143), creating  a new Palestinian myth that depicts Tel Aviv as an occupied Arab city.

The UNRWA books of 2016 strengthens the violent character of the struggle for liberation. The UNRWA textbooks of National and Social Upbringing for grades 3 and 4 refers, for the first time, to the role of these particular books vis-à-vis the “conquest” : “This book is intended to build and strengthen the set of values and nationalism among the younger generation of our sons, the students – in order to withstand the various challenges imposed by the conquest that oppresses our land and uses various means in order to continue its hegemony and control over our fate and resources and liquidate all the local, regional and international efforts aiming at liberation, construction and establishment of a Palestinian state with Jerusalem as its capital.”

30 Democratic nations , beginning with the US,  finance  UNRWA to the tune of 1.2 billion USD each year. These donor nations could  check and revise books used in UNRWA schools. That will happen only when citizens of  donor nations demand that their governments condition funding to UNRWA on an overhaul of the UNRWA schools.

The  question remains: Why allow UN schools to indoctrinate children to engage in  war?

The writer is author of Roadblock to Peace – How the UN Perpetuates the Arab-Israeli Conflict: UNRWA Policies Reconsidered and has been active in efforts to reform UNRWA for the past 28 years. He runs the Israel Resource News Agency and the Center for Near East Policy Research, which has produced books, monographs and movies filmed on location in UNRWA.