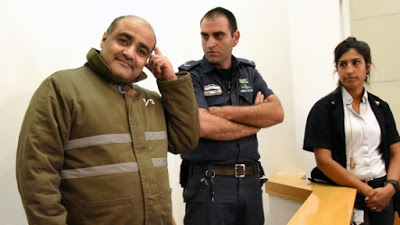 The trial of a top-level World Vision manager got underway in an Israeli criminal court in Beer Sheva a few days ago. Fresh revelations disclosed today in an Australian newspaper (and below) suggest the credibility of the global Christian charity is going to be as much on trial as the man himself.

Mohammad El Halabi, who held a leadership role in World Vision‘s Gaza office, is charged with

funnelling tens of millions of dollars to Hamas… [He’s] alleged to have led a double life as a senior figure in the Islamist organisation and used his position “to divert the humanitarian organisation’s funds and resources from the needy to benefit of Hamas’s terrorist and military activities”. According to the allegations from Shin Bet, Israel’s domestic security agency, the money given by British donors was used to build a military base, dig military tunnels and pay salaries in Hamas’s military wing. Other donations were allegedly transferred to buy weapons for Hamas in the Sinai during the period that Mohamed Morsi was president of Egypt. The announcement of Halabi’s arrest followed a raid on World Vision’s office [in August 2016]… [H]e was indicted on a number of charges, including funding terrorism. [“Israel accuses World Vision’s Gaza director of diverting cash to Hamas“, The Guardian, August 4, 2016]

It amounts to an appalling set of suspicions: Christian charity in service of the murder and maiming of Jews? We pulled together a lot of the background to this deeply worrying scandal in an earlier post: “14-Aug-16: Who actually cares that foreign aid is diverted from needy Gazans to terror? Not who most people think“.

Today, an investigative journalist at The Australian, Anthony Klan, drills down into some of the evidence, and in particular the unusual accounting deployed by World Vision’s record keepers:

World Vision’s Jerusalem, West Bank and Gaza charity operations — of which Australians are among the biggest funders — have spent millions of dollars on programs such as “keeping children safe ­online” and “home gardens”, ­internal accounts show.
World Vision is under scrutiny following allegations by Israeli authorities that its Gaza head, ­Mohammad El Halabi, funnelled $US43 million to Hamas, a proscribed terror group since 2010. The sum was about 60 per cent of World Vision funding to Gaza.
Investigations by The Australian show the poor transparency of World Vision’s operations in the region, with the agency ­appearing to publish no breakdowns of where or how funds are spent. For the year to September 2015, World Vision Australia reported $4.786m “disbursed” to “Jerusalem/West Bank/Gaza” without any further information.
The Australian has now ­obtained, through the Jerusalem-based NGO Monitor, a document filed by World Vision Israel with a local charity regulator, containing curious entries for expenditures, including “drawing a smile on children” and “South Gaza transformed families”.
The document sheds light on World Vision’s otherwise secretive disbursements in the region. ­Israel’s Registrar of Non-Profits wrangled with World Vision for ­almost two years to obtain it. Only in recent months — after the Israeli regulator on June 26 threatened World Vision Israel with “dissolution” — was the document provided.
World Vision Australia has been unable to provide The Australian with breakdowns of spending in the region. But the 56-page World Vision Israel document filed with the Israeli Register of Non-Profits shows cash flows ­associated with the group. The document is not properly labelled, but appears to be a banking or cashflow statement from December 2012. Entries include “more enjoyable learning” alongside the figure 196,138.14, understood to be Israeli shekels, each worth 35c, amounting to $68,648.
Other entries include “transformed relationships”, 416,871 ($145,905); “drawing a smile on children”, 104,926 ($36,724); ­“special gifts reserve”, 495,352 ($173,387); “South Gaza empowered children”, 408,443 ($142,955); and “South Gaza transformed families”, 106,327 ($37,214). Citing the ongoing trial of Mr Halabi, a World Vision spokeswoman declined to comment on the accounts, other than to say they would be subject to a wider audit the group had commissioned. Mr Halabi’s trial began last week in an Israeli court, however no pleas were entered and it has been adjourned until January 12… [“World Vision hazy on how it spent Gaza cash“, The Australian, December 6, 2016″]

Four months ago when the explosive charges emerged, there was a flurry of World Vision activity via the media plainly aimed at blunting the Israeli claims and pooh-poohing the credibility of the Shin Bet. This for instance from an Amira Hass piece in Haaretz:

The indictment against Halabi describes a sophisticated, far-sighted scheme involving the planting of a person within the organization, with the aim of misappropriating funds and materials, and passing them on to the military wing of Hamas. To accomplish this, Halabi would have had to overcome World Vision’s meticulous and centralized system of allocating money and equipment, contracting suppliers and the regular oversight of accountants. He also would have had to evade the main office of his organization, in East Jerusalem. Workers at other aid organizations are familiar with this well-organized system, and therefore they have cast doubt on the Shin Bet’s statements… [“Israel’s Allegations Against World Vision: Credible Charges or Political Ploy?“, Haaretz, August 9, 2016]

We don’t claim to know more than Hass or the editors at Haaretz, and we certainly know less than what World Vision’s management team know. But if the filing at the Registrar of Not-for-Profits in Jerusalem is to be believed, a charity that allocates large outlays to such expese categories as “Drawing a smile on children” and “Special gifts reserve” and then claims to be meticulous and well-organized has some serious credibility issues.

And perhaps also some serious shortcomings when it comes to the responsibility, maturity and probity required when you run a global enterprise that raises many hundreds of millions of dollars annually from trusting donors and you keep telling them this is going to help do good in the world.

The trial has some way to go. But it’s notable that several major donor states have frozen further payments into World Vision’s Gaza activities pending resolution. They are Great Britain, Australia, Austria and Germany (according to DeutschlandFunk, November 30, 2016). The effect on World Vision’s work in field must be devastating [see “World Vision fires 120 in Gaza as Israel freezes funds over Hamas accusations“, Times of Israel, September 9, 2016].

But then there’s the matter of just how surprised World Vision’s serious and responsible management must have been when the scandal broke. The same investigative reporter at The Australian noted a week ago that

Allegations that World Vision Gaza head Mohammad El ­Halabi funnelled millions of dollars to the Hamas terror group were raised with the charity last year but dismissedafter an internal investigation… World Vision has described the allegations against Mr Hal­abi as “very explosive” but said it has “no reason” to believe the claims were accurate…  The case is particularly relevant locally because, as ­revealed by The Australian yesterday, the Australian government has been the single biggest donor to World Vision’s operations in Jerusalem, the West Bank and Gaza since Mr Halabi became the charity’s Gaza head… [“World Vision charity dismissed Hamas funds link“, The Australian, November 29, 2016]

According to a feisty unfriendly-to-Israel report in Foreign Policy [“Israel Declares War on Gaza’s NGOs“, September 20, 2016]

World Vision had already investigated Halabi in 2015, after one of its accountants, who had recently been fired, accused him of stealing money and working with Hamas. The charity brought in an outside investigator to review its books; the audit turned up nothing suspicious.

Everyone has to be treated as innocent until proven otherwise. But given the life-and-death nature of what this scandal is really about, sharp questions ought to be asked. NGO Monitor, whose work we think is exemplary, does that well.

NGO Monitor raises additional concerns [“Questions for World Vision“, NGO Monitor, November 01, 2016] that we wish World Vision had addressed. Some pertain to its accounting practices and diligence. Others touch on the only-too-obvious political and ideological agenda that underpins its work in this part of the world.

Friends in Australia tell us there is a real desire by the Jewish community specifically, and Australians in general, to see the cloud removed from over World Vision’s head and for irresponsible allegations to be avoided. We can understand them. There are places and times where World Vision does valuable work.

But there’s another side and it’s that a charity of World Vision’s scale [“active in more than 90 countries with a total revenue including grants, product and foreign donations of $2.79 billion“, according to Wikipedia] ought to have been doing somersaults in the air to avoid even the slightest taint of scandal, let alone find itself accused of allowing millions of dollars to be siphoned out of its operations and applied to funding terrorist warfare against innocents.